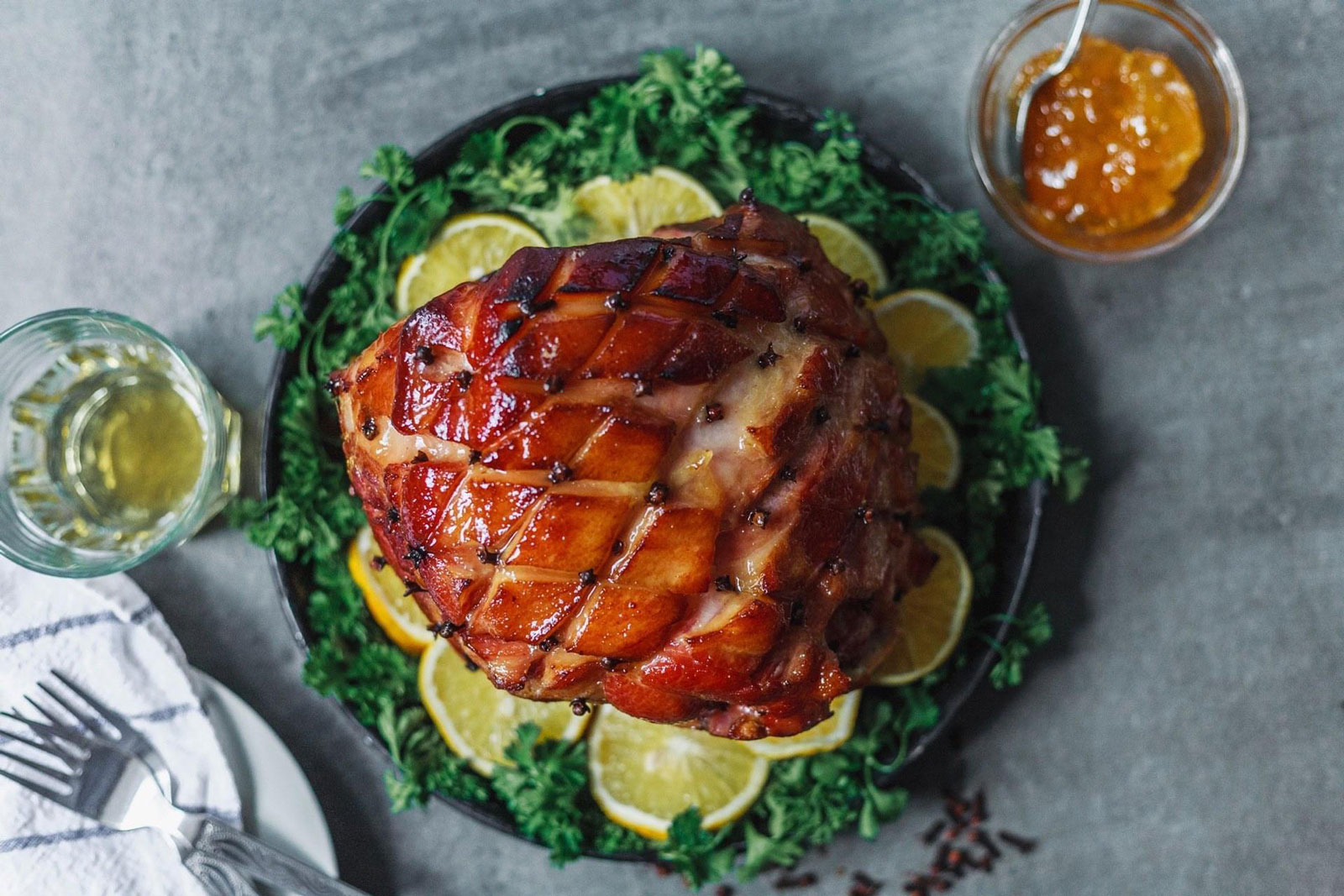 Have you ever cooked meat with jam, marmalade or preserves? It’s one of the most delicious things. I have a recipe I think it’s from the pioneer woman that I love and make a lot. It’s sticky whisky and peach jam chicken thighs. They are sort of the best thing. So when I got my hands on this picnic ham I couldn’t wait to do a take on Donna Hay’s bourbon marmalade glaze. She uses orange marmalade but I have a weakness for apricot marmalade and so I used that. It was fabulous! 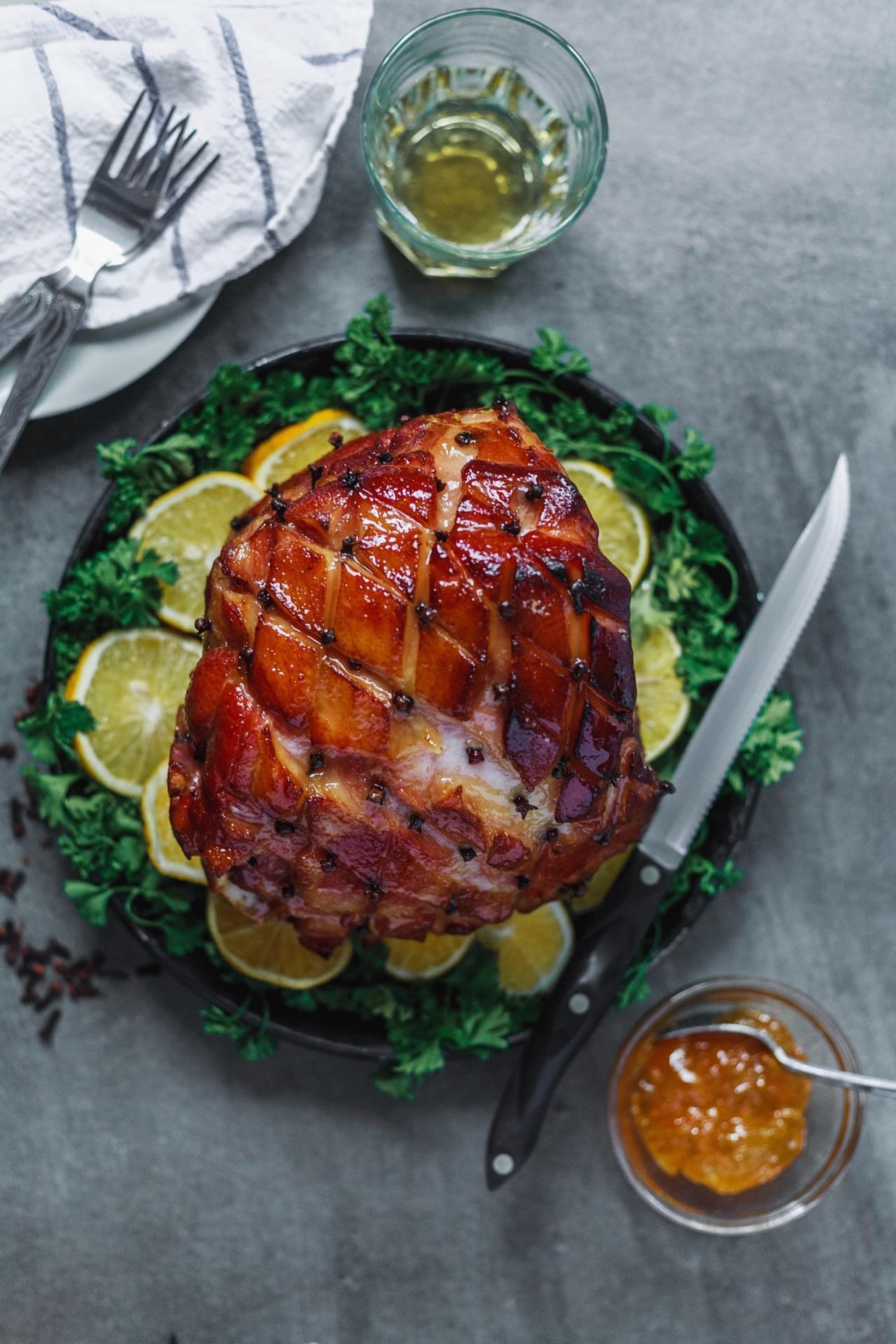 If you are a fan of pork I definitely recommend making this ham. A picnic/city ham is already cooked and literally just needs to be defrosted (best done over a day or two in the refrigerator) and then warmed through. This usually takes a few hours in the oven. But it’s so low fuss and easy which makes it the perfect way to feed many. This makes it preferable to making a turkey for some. No brining required and no need to worry about dry meat. When choosing your picnic or city ham make sure to get one with the bone in which imparts way more flavour to it and bonus you can use the bone in soup after you feast on the meat itself. Try to also get one with little to no additives like water and natural juices – just one that is listed as ham. 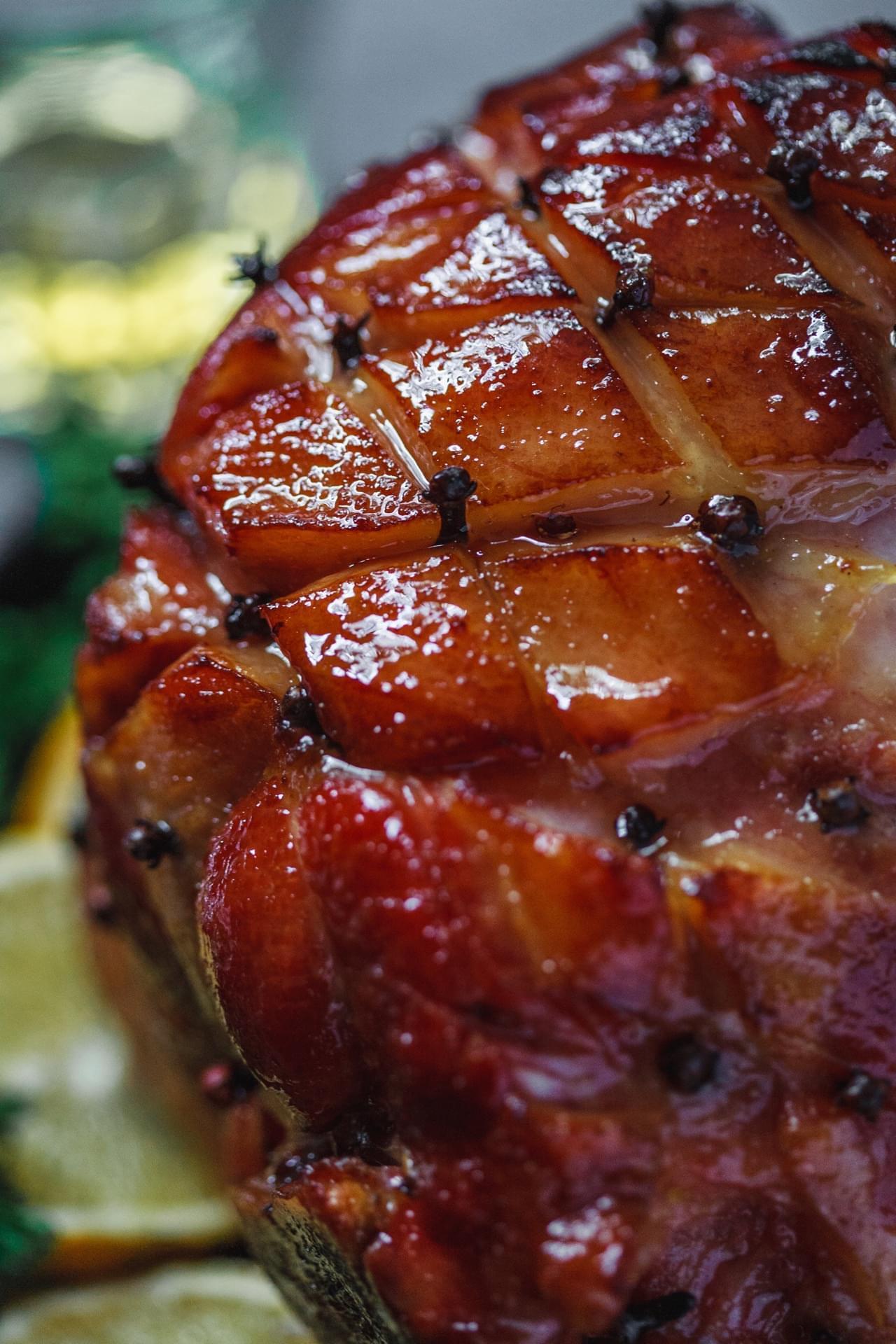 The ham I got was also a whole ham not a spiral one which is pre-cut. Less convenient maybe but the moisture is locked-in in a whole one so no chances of it drying out. My ham also came with the rind already removed so even less effort but if yours comes with the rind on there are instructions below on how to remove it easily. 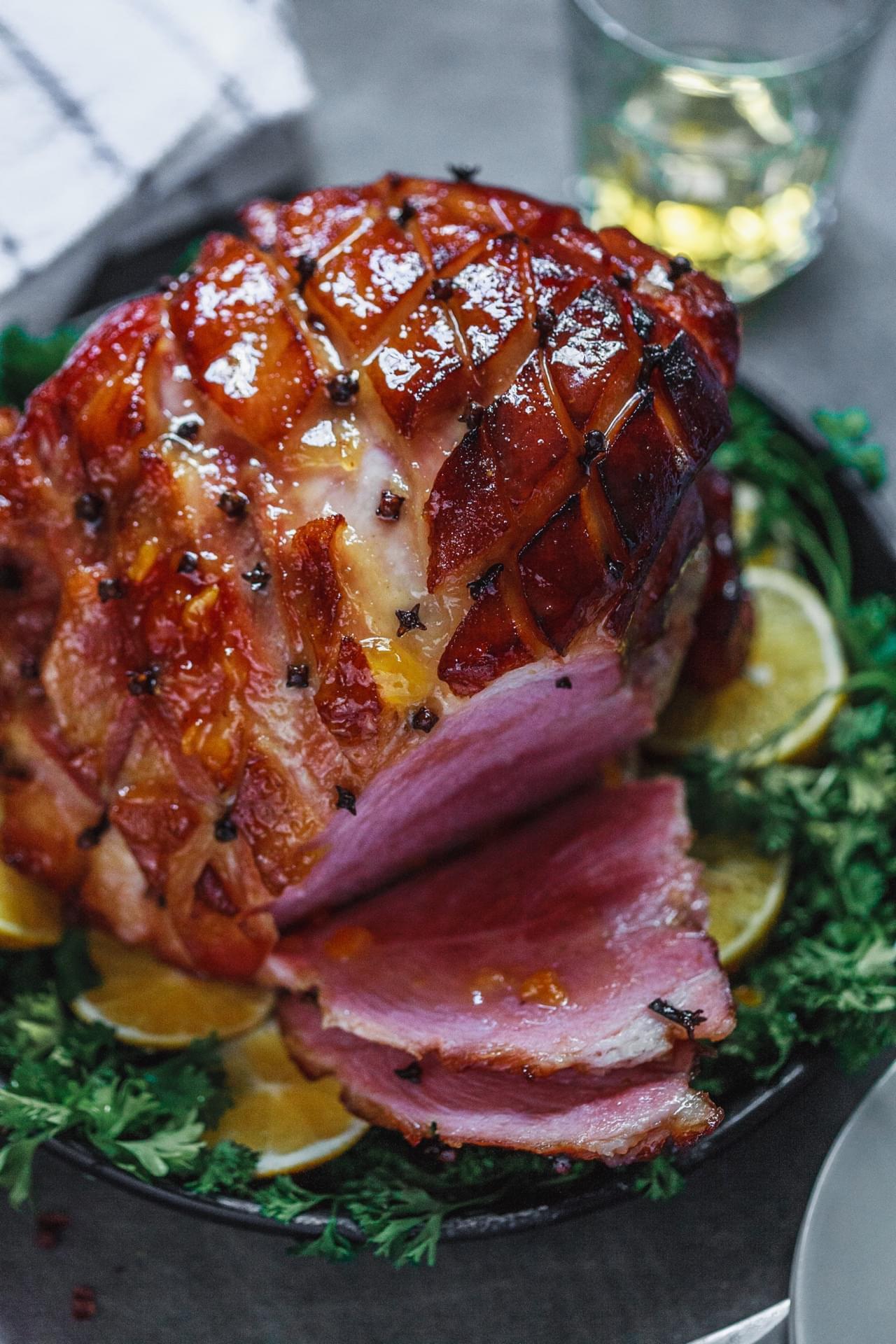 Once you have your ham the fun part is finding a glaze for it. So many options out there that give the ham a sweeter more delicious flavor and give the outer edges a beautiful crust so to speak. I reserve some of the glaze (recipe makes enough to reserve) to use on leftover pieces of ham or even one the table for whoever wants to add more to their served pieces. I chose this fabulous glaze because as I said at the outset I am a huge fan of glazes involving jams and marmalades and ofcourse bourbon is a great seller for me too. 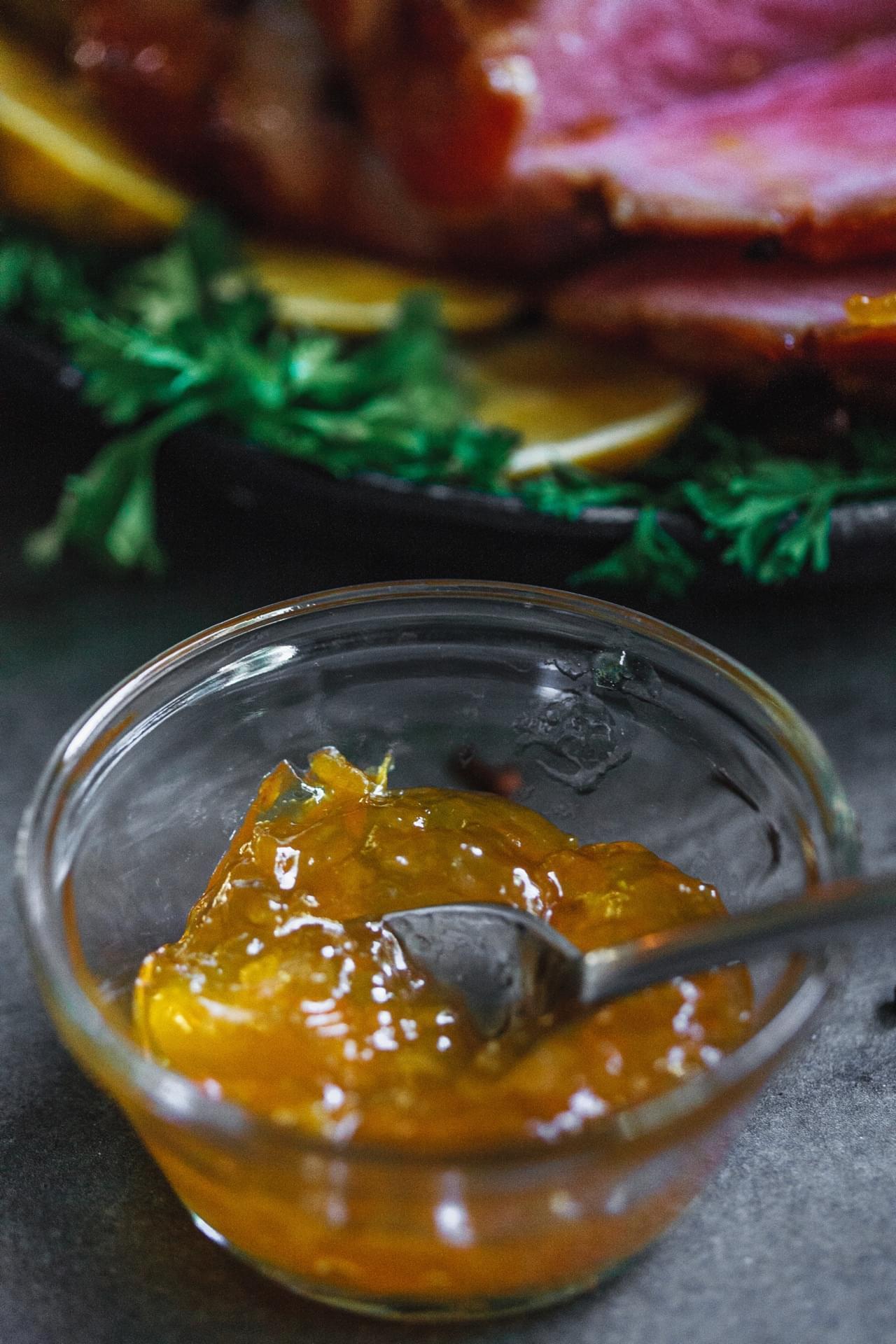 My ham was just over 7 lbs and I cooked mine at 325 ° F. On average at 325 you should allow for approx 15 minutes per Lb/pound, but the best measurement of time is a meat thermometer. After the first 1½ hours of baking you can test the temperature of the ham and gauge how much more time is needed. You want the internal temperature to reach approx 120-140 ° F. When in doubt check the packaging that the ham comes in for exact cooking instructions and temperature it needs to reach but I wanted to share some guidelines in case your ham doesn’t come with any or like me you throw the packaging away or cut it on the directions and can’t read them anymore. 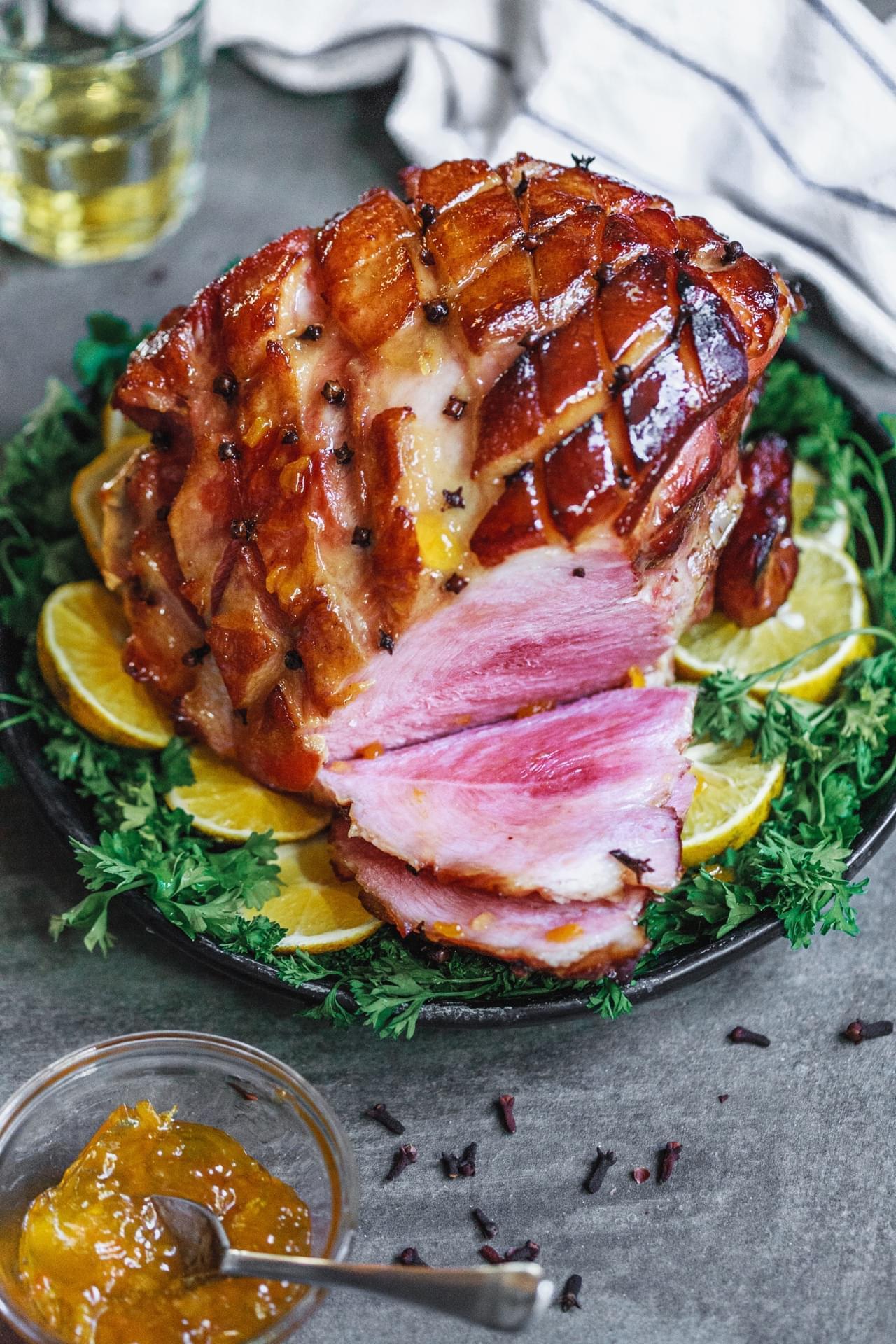 Overall this is such an approachable recipe to cooking a ham. It really is the easiest thing especially if you are a beginner to hosting crowds and want literally a no fail meat option that is super low fuss - this is the one for you. Your friends and family will rave and then if you have any leftovers you can enjoy them later in soup, refried with eggs, in sandwiches or just like my husband does – snacking on it straight up while standing in front of the fridge. 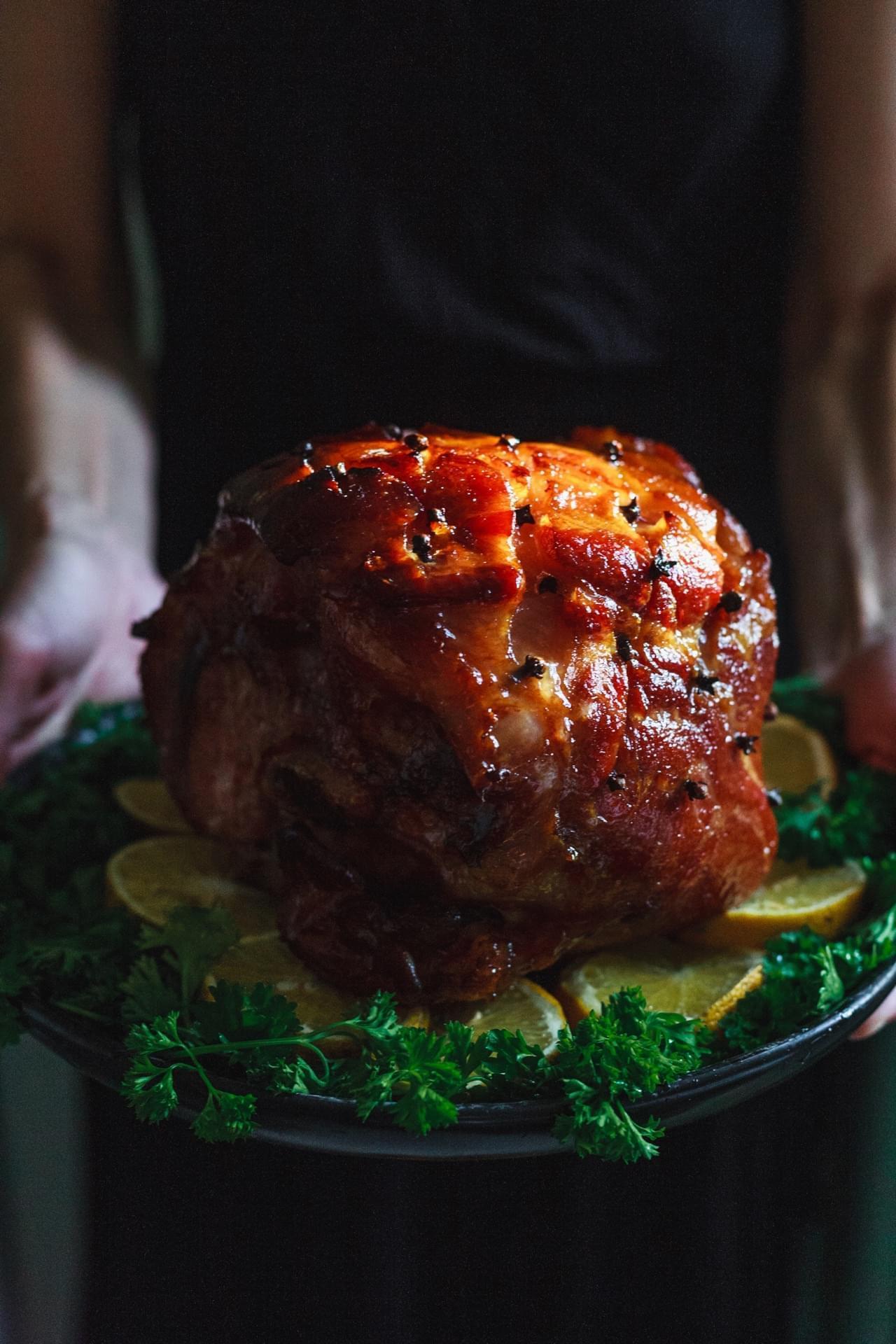 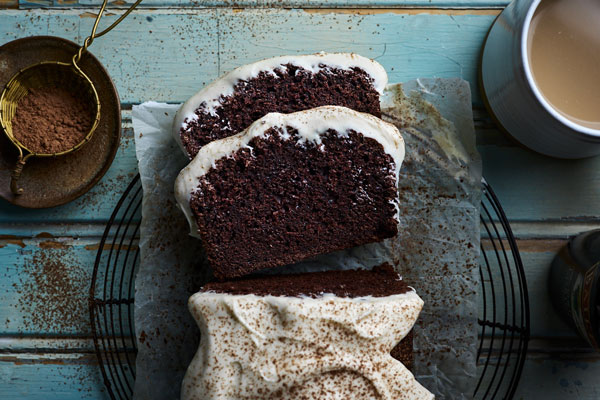 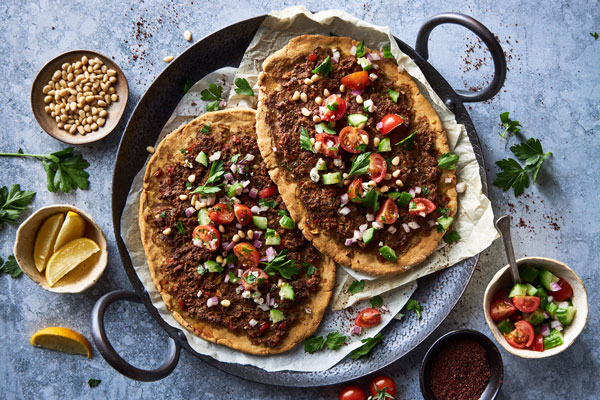 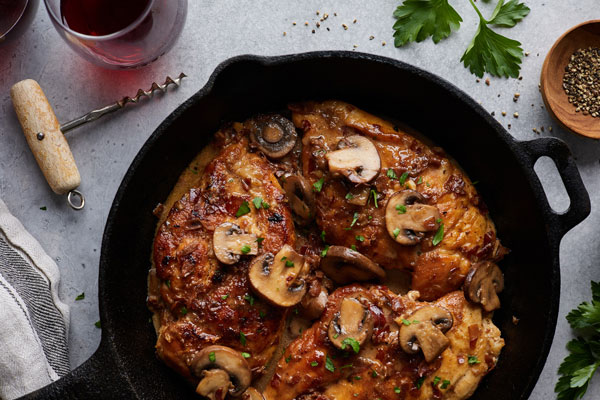