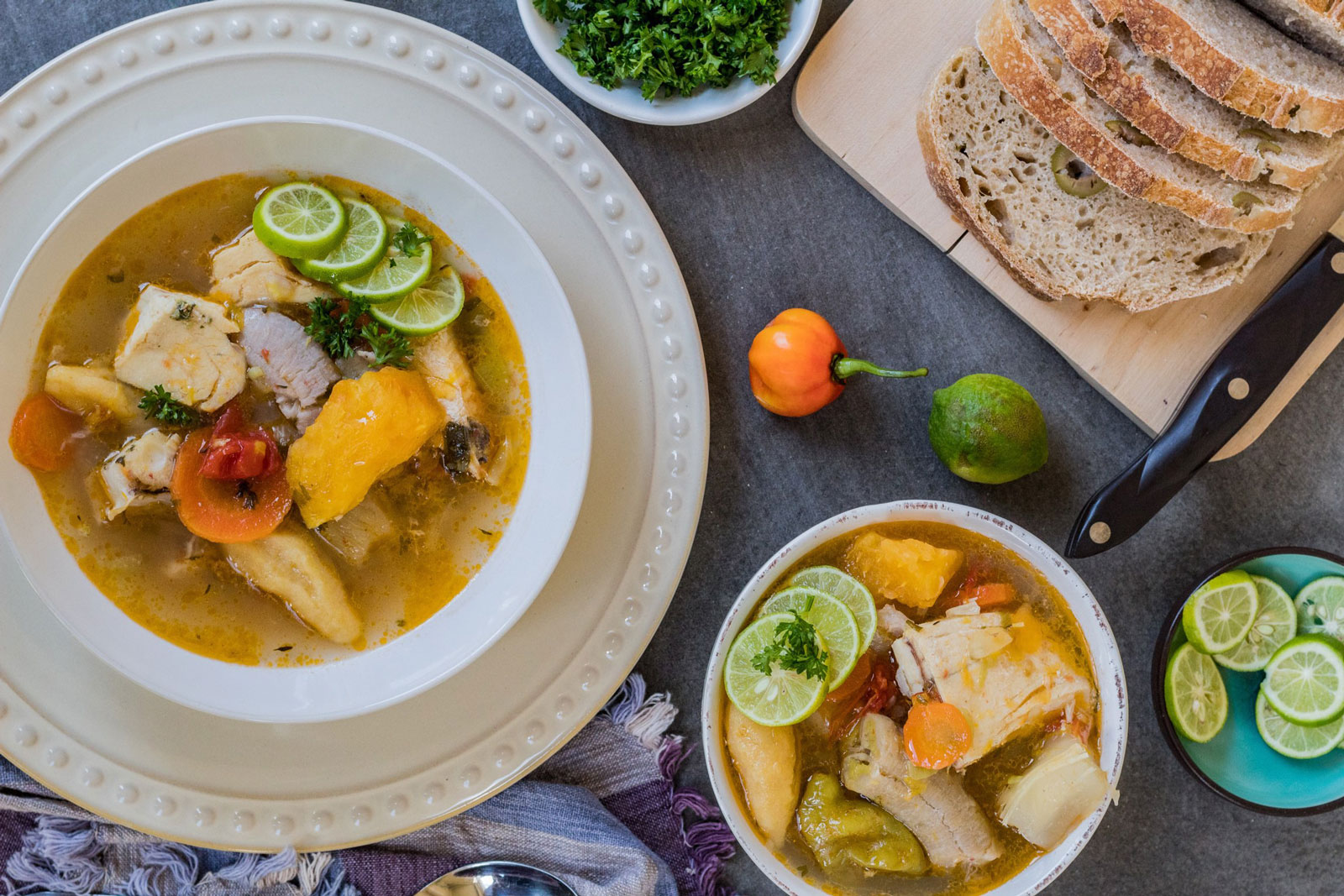 Yesterday was such a hot day! It reached like 36 degrees and I was out and about in it all day. Dry season is definitely here to stay! I felt like I was roasting the whole time! The last thing I wanted to think about was soup when I finally got home dripping and moist from sweat. (Yes I do sweat a lot. Not glisten or glow but full on sweat) Yet here I am writing about this fish broth. And guess what I had for dinner? The pumpkin soup I made over the weekend. That was all after a very cold shower and after having a spectacular juice I made that totally cooled me off. 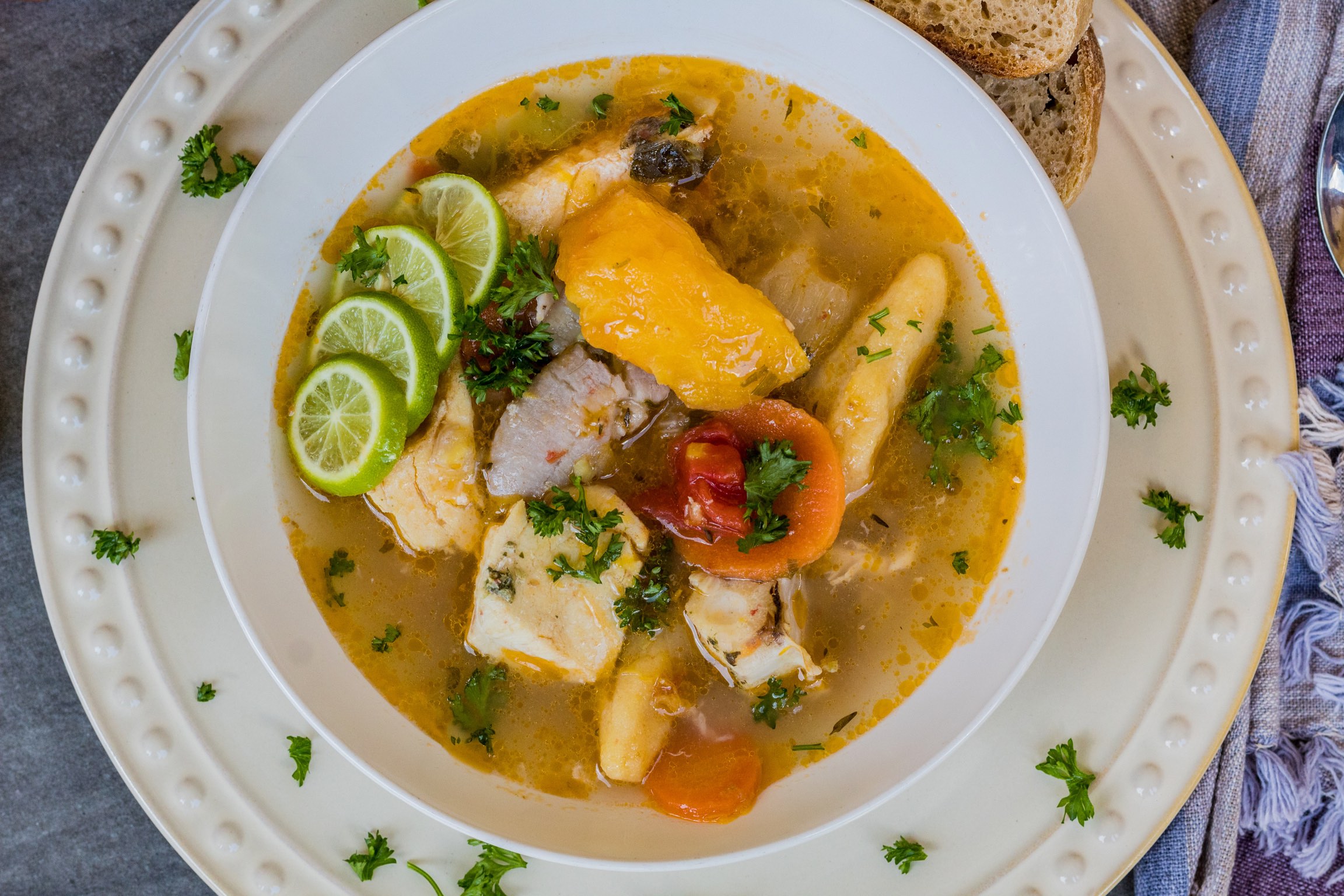 Ok so here is the deal with this fish broth. People make their fish broth differently, just like many other Trini and Caribbean dishes. That is why if you noticed I never claim my dishes to be the most authentic and traditional dishes of Trinidad or the Caribbean. I usually say Joanne’s style or Trini style so yes it a traditional dish but done my way or the way I was shown. Just needed to be clear because I recently was told that kale would taste bad in my Greek baked bean dish and that it wasn’t traditional. So I do this with my Greek dishes too. I do not claim to be an expert in multi-ethnic dishes. I love cooking them and I usually put my own spin on them. I don’t think it ruins the dish, but instead makes it my own. Although my husband eats and loves all the food I make he most definitely will tell me if a dish is way off, when it comes to my Trini food. Just thought I would clarify a little. 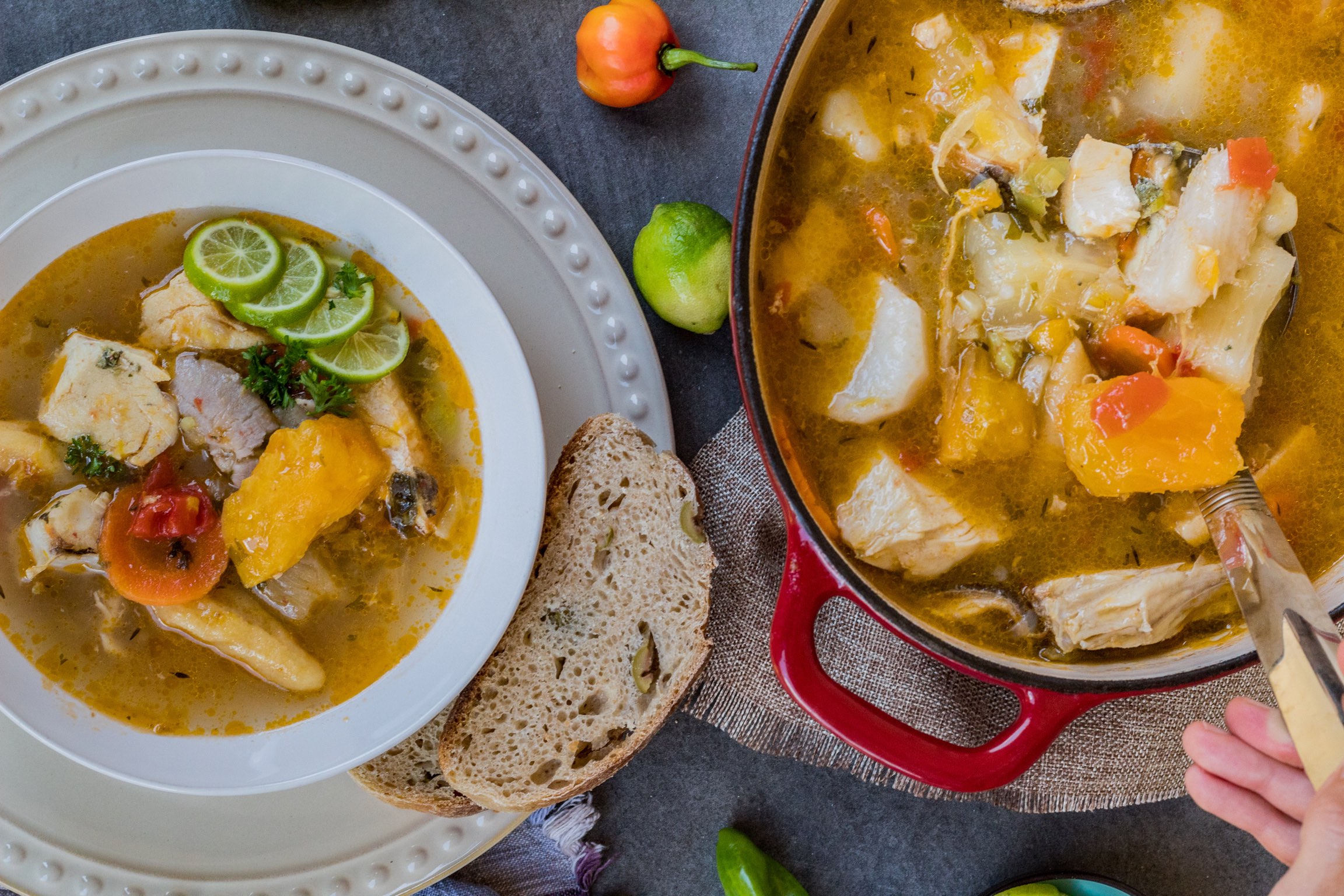 This broth/soup has way more provision (earth-grown vegatables) in it than your typical broth but both my husband and I love provision and dumplings so I make mine with lots. I like to flavour all my soups by instead of just boiling my seasoning and onions and garlic in the water or broth, I sauté them in some butter before adding the water or broth. Traditionally this soup is made with more boney fish and fish heads but I had some beautiful white fish steaks my father-in-law gave me so I used what I had. You can use homemade fish stock but I used water instead. Some people like to make it a little tangy using lots of lime or lemon juice but I don’t. I prefer adding a little squeeze after. Also some like to add pasta or macaroni in preference to the dumplings but I prefer dumplings and my husband swears he has never eaten fish broth with macaroni before. Some like it super spicy and add hot pepper but I don’t add it all the time. Anyways you’re catching my drift! Everyone makes their broth as they are accustomed eating it or according to how they like it. 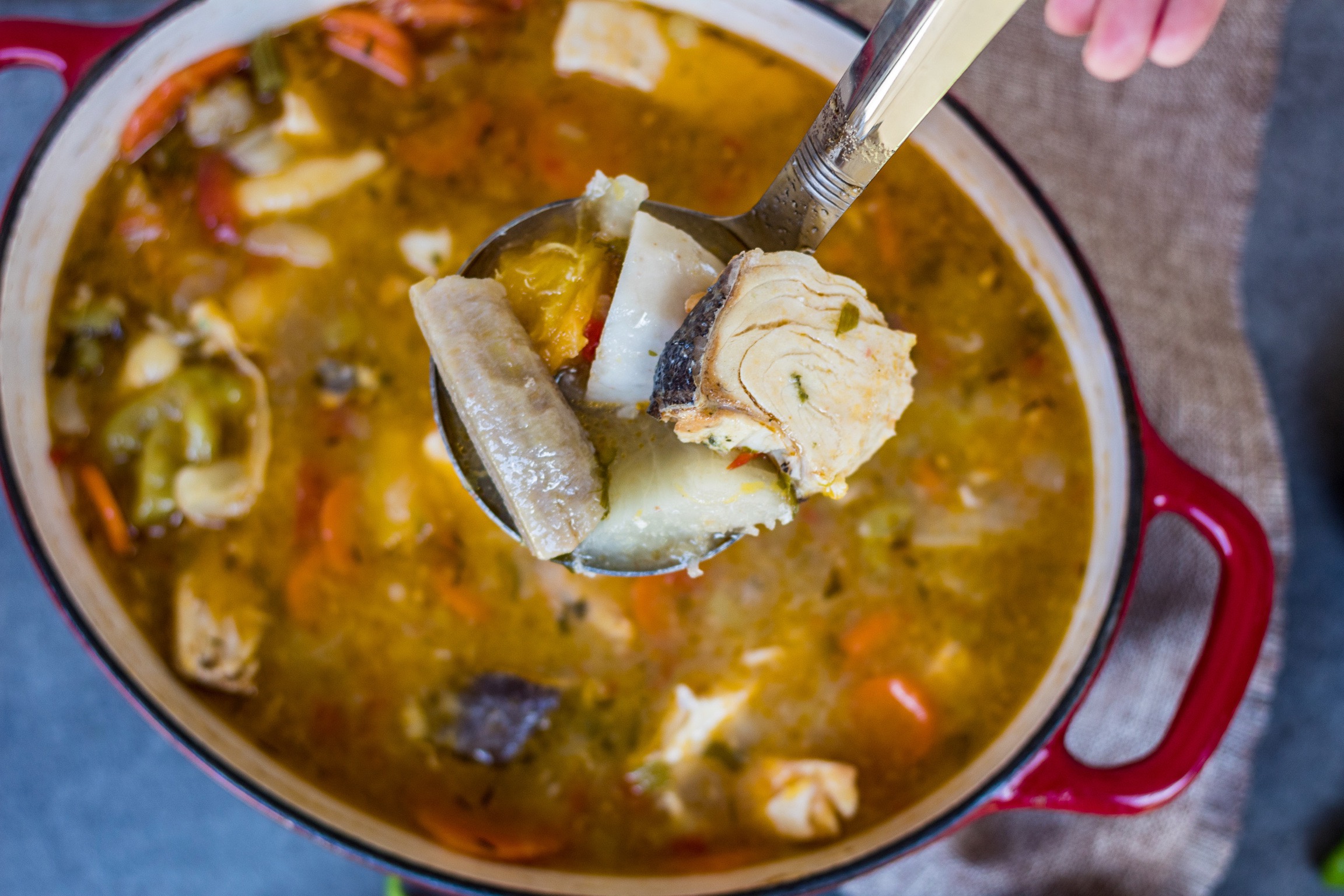 I kind of got this recipe from my father-in-law while we were chatting about what to make with the fish he was giving me. So I basically went off his verbal recipe which is always a bit of a wash just like it would be if you asked me for it, because we are both cookers not measure’ers’, (more like toss this in and a dash of that etc) so yes you can just imagine how difficult and annoying it has been for me to write recipes. I am getting better though and I’m still trying to improve on that. So thanks for your patience!! What I basically did with this recipe is use my Trini cooking principles, soup making principles and what he gave me regarding the recipe and came up with this. Hope you like it and enjoy it as much as we did!!

For the dumplings (if using) 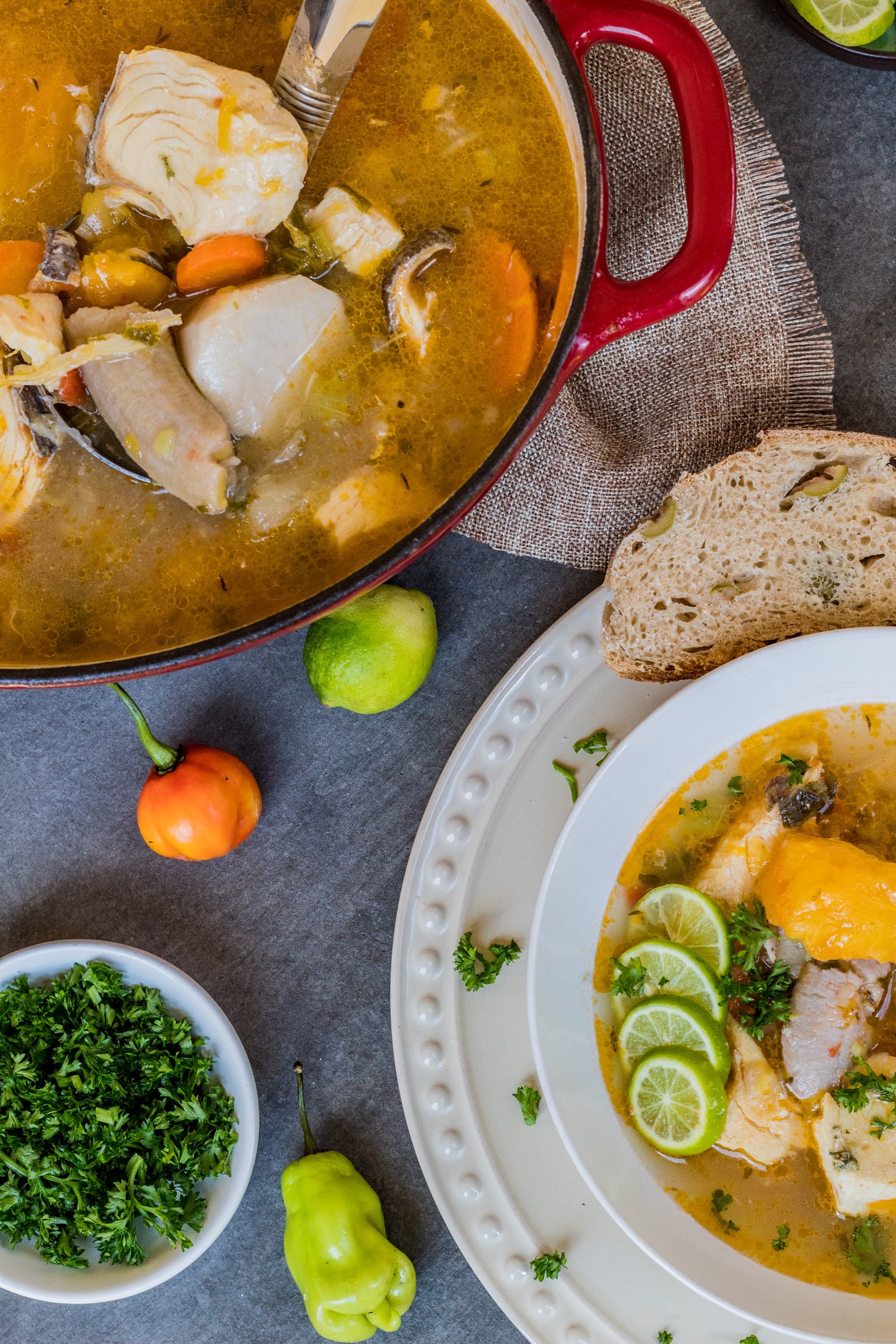