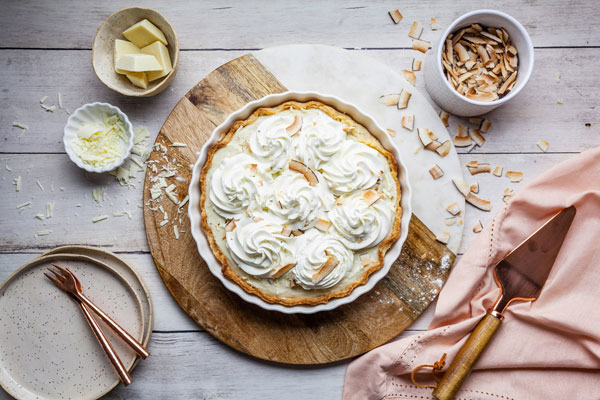 I wanted to make a delicious coconut cream pie with the most basic ingredients and also with the most coconuty flavour but without using artificial flavours. I have made other desserts and pies with coconut extract and they are good but I wanted a richer coconut flavour and using coconut in the crust and the custard just had to happen. I found two recipes that I was happy with and I used a few components from each to get this yummy recipe right here. I’m very happy with it and so was my family. It’s a great make ahead dessert that is stress free - even the custard I promise. I made the crust and the custard the day before and topped it which whip cream just before serving. Let me break it down and talk about each layer. 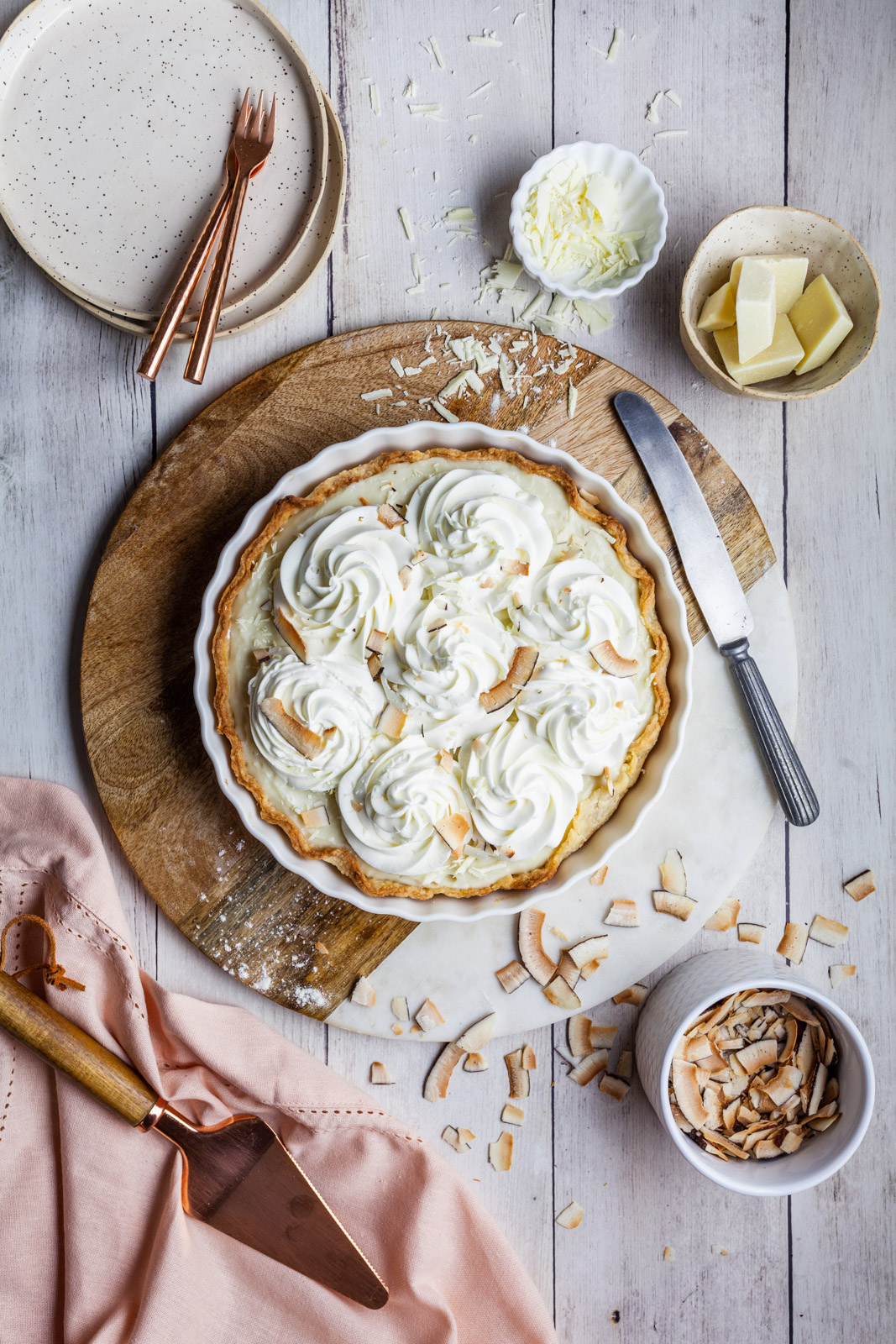 As I mentioned before the crust has coconut baked into it. What’s better than the flavour of regular coconut? Toasted coconut! It smelled heavenly while it baked. It’s a tender crisp crust that holds in that creamy custard perfectly. I learned something new when I made this tart from Chatelaine magazine. They suggested brushing a layer of melted white chocolate to the tart crust after its baked and once it’s cooled. Of course adding white chocolate to anything is never a bad idea but this is more than just adding white chocolate for flavour. It is added to create a seal for the crust and prevent it from getting soggy from the custard. It’s a wonderful little tip that I’m definitely holding onto and applying to other pies for sure. It was only appropriate then to add more white chocolate to the recipe as a garnish, so that is what I did. No regrets! 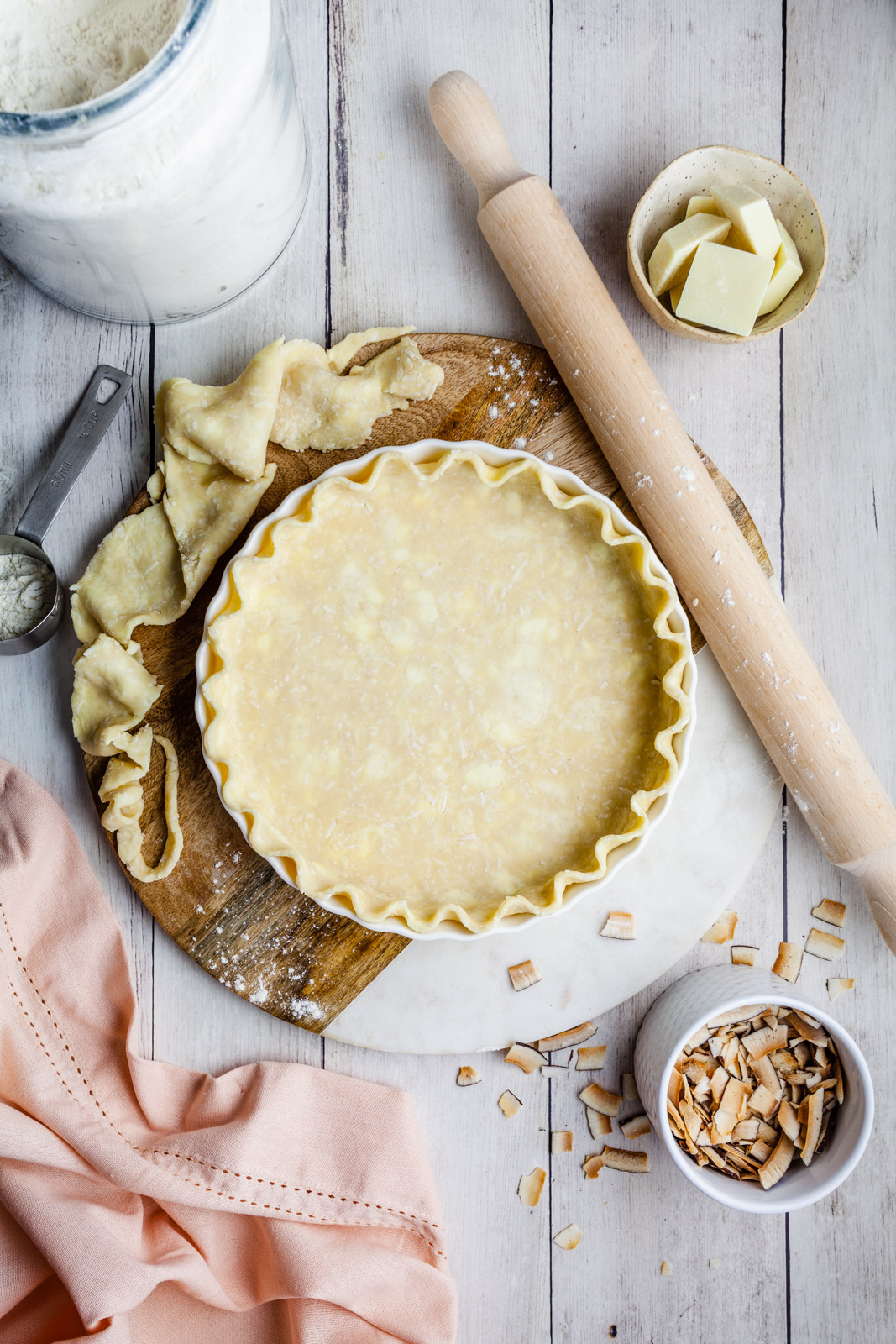 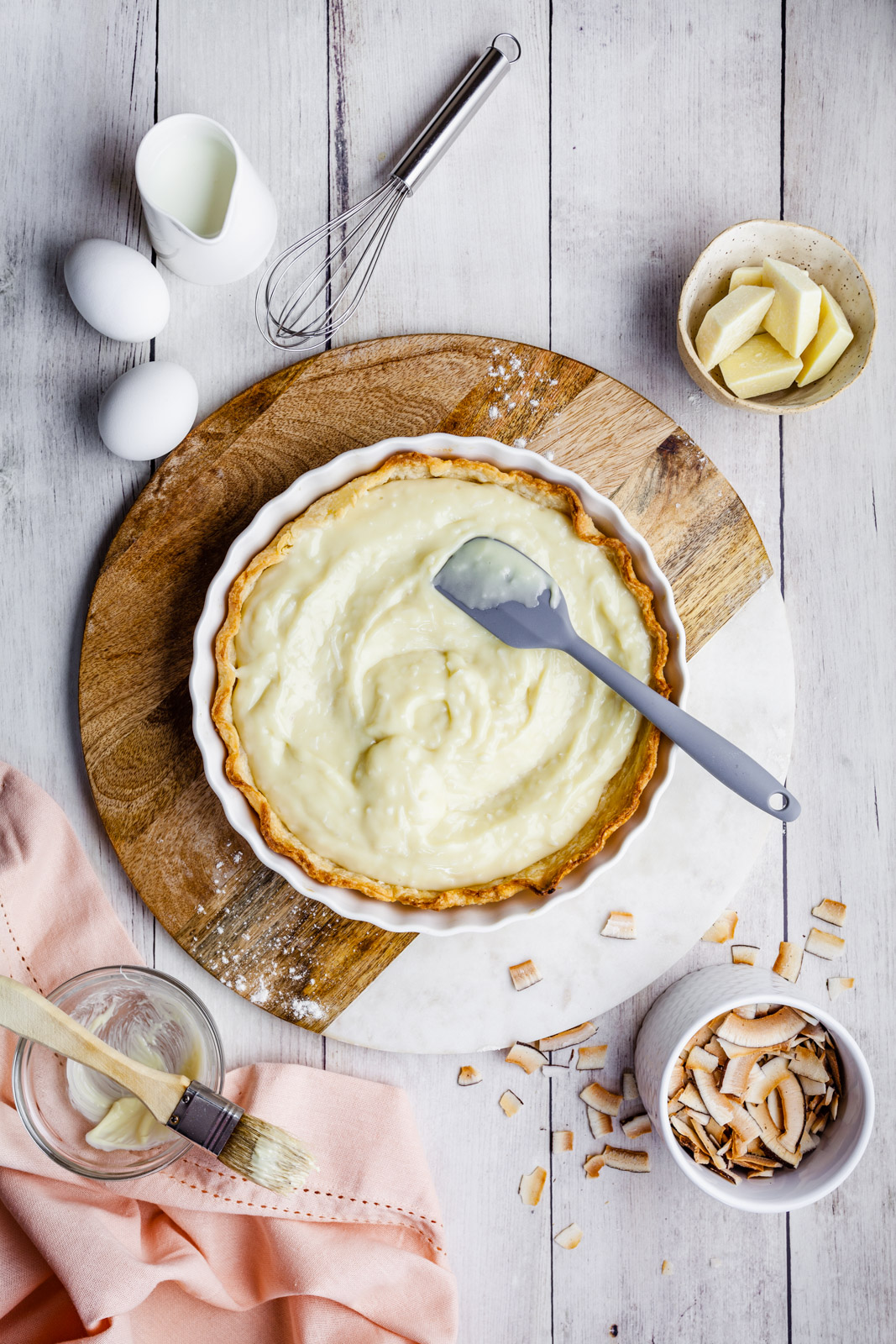 This is a very simple and straightforward custard as far as custards go. Not only does it have shredded coconut in it, it’s also made with coconut milk - told you it was extra coconuty. It’s just a few minutes of whisking and your done. It tasted delicious and I dare you not to have a few spoonfuls (or more) of it as you wait for it to cool. The shredded coconut not only adds flavour to the custard but adds a bit of texture to it too. It doesn’t stay dry and crisp but softens as it cooks and adds a scrumptious texture and flavour to the custard. 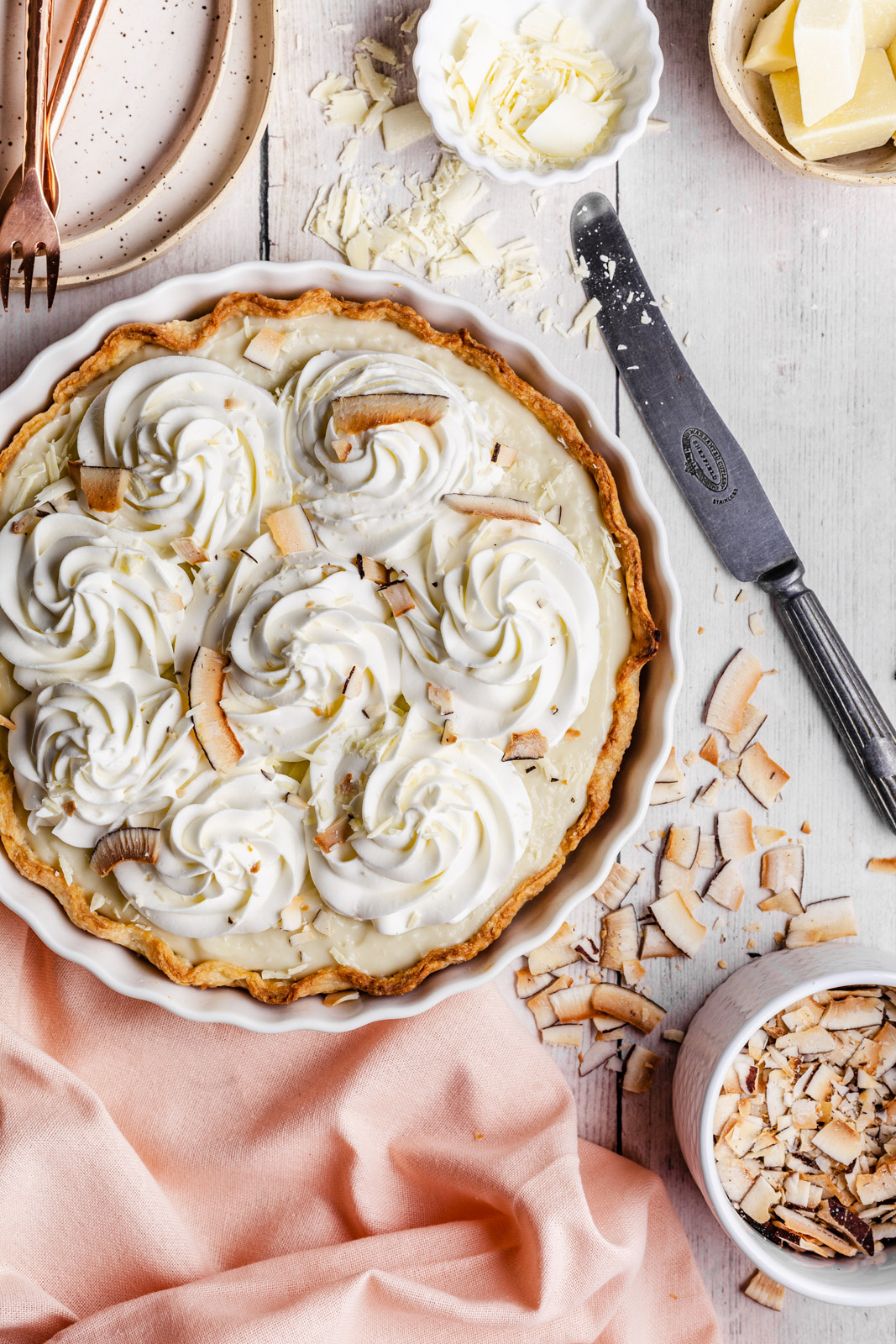 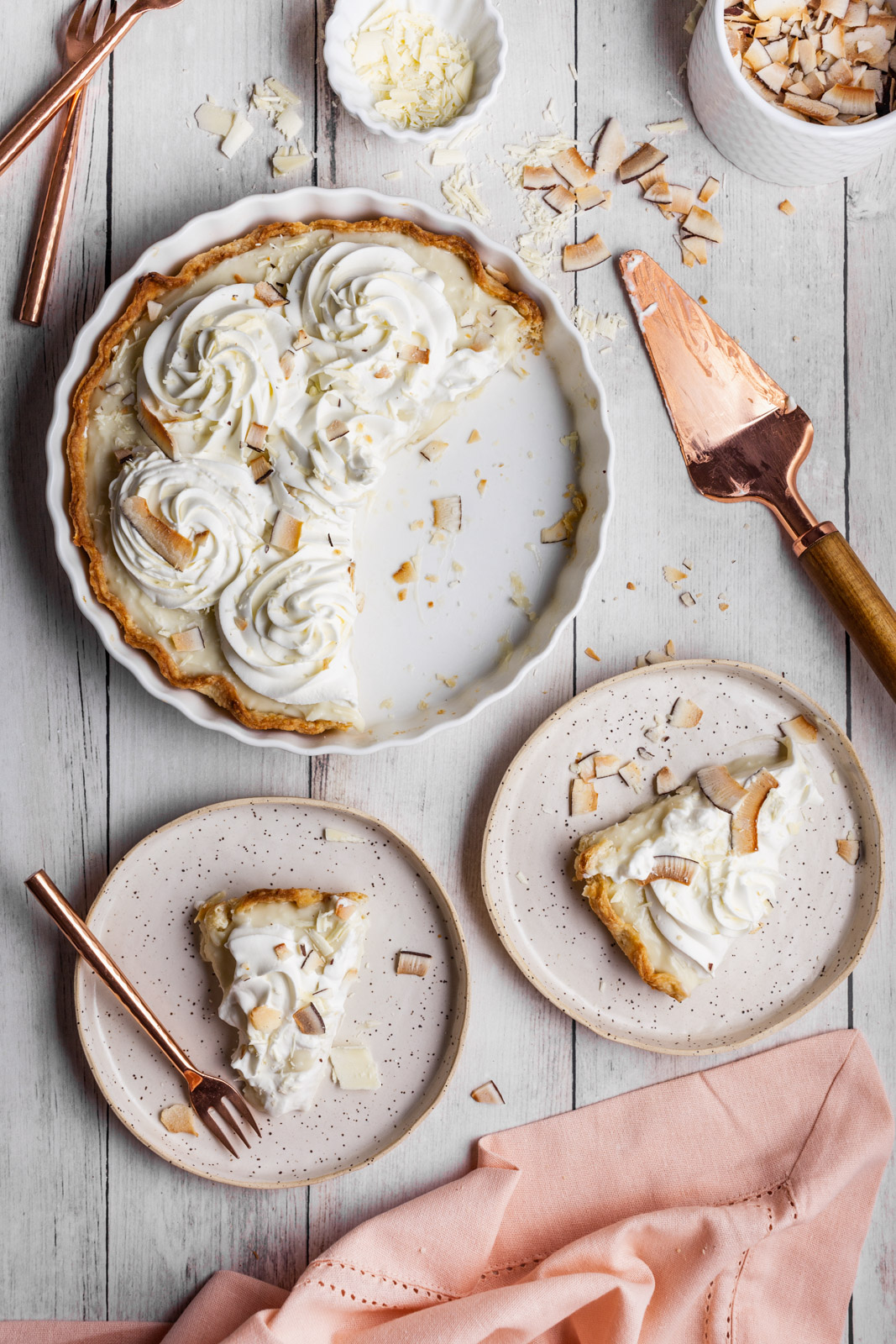 It’s hard to resists this pie. The textures and flavours are a real treat for the mouth and tastebuds. The crust is tender and crisp and that custard is creamy and, what is a coconut cream pie without whip cream - I love a mile high whip on my pie but decided to be a bit more creative this time with piped the whip on. The whip adds that perfect light and fluffy layer which compliments the custard and crust so much. Over that I added toasted coconut flakes and white chocolate for extra texture and decadence. It’s a great pie and I do hope you enjoy it.

Adapted from Chatelaine and Tasting Table 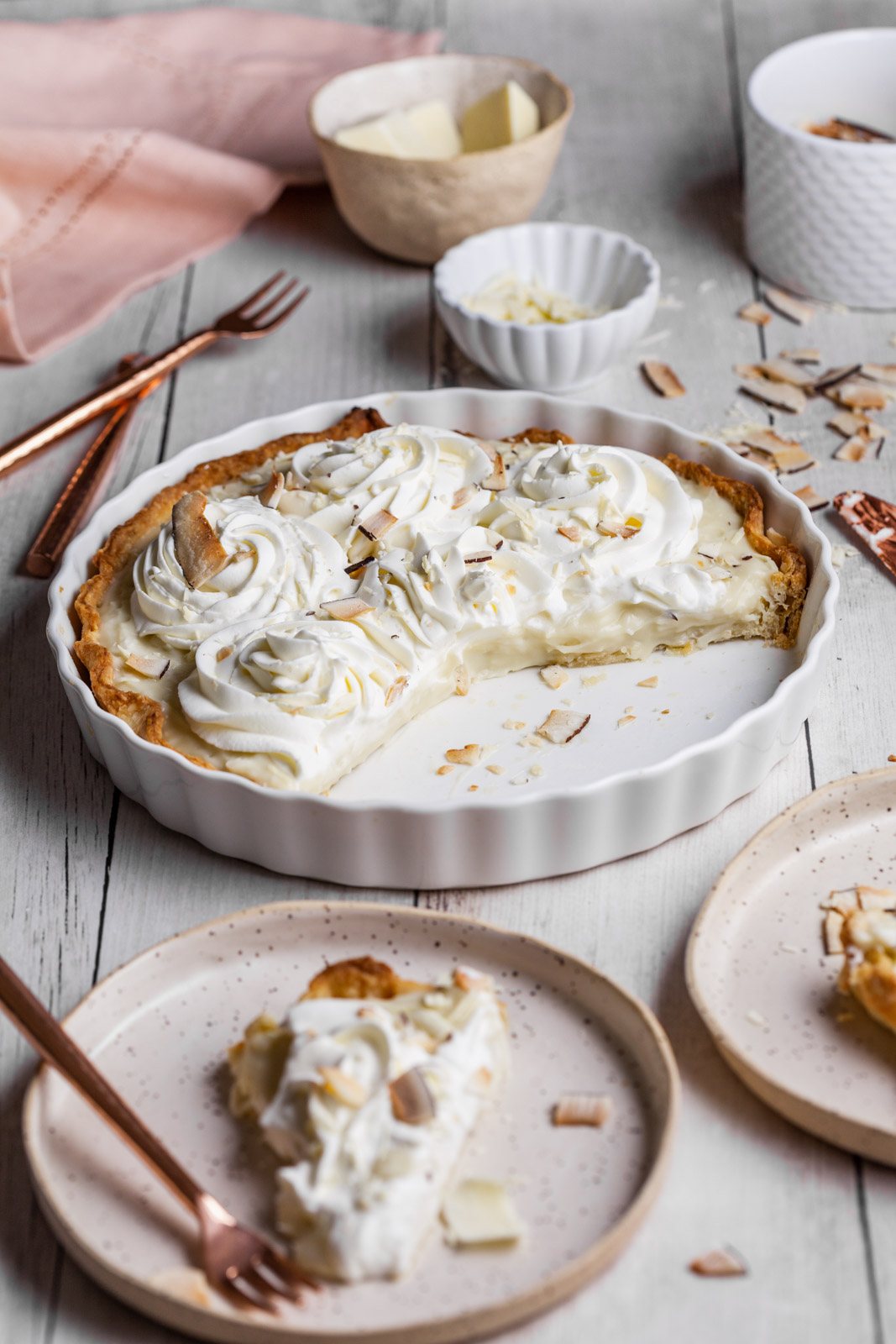 For the Coconut Pastry Crust

For the Coconut Pastry Cream

For the Whipped Cream 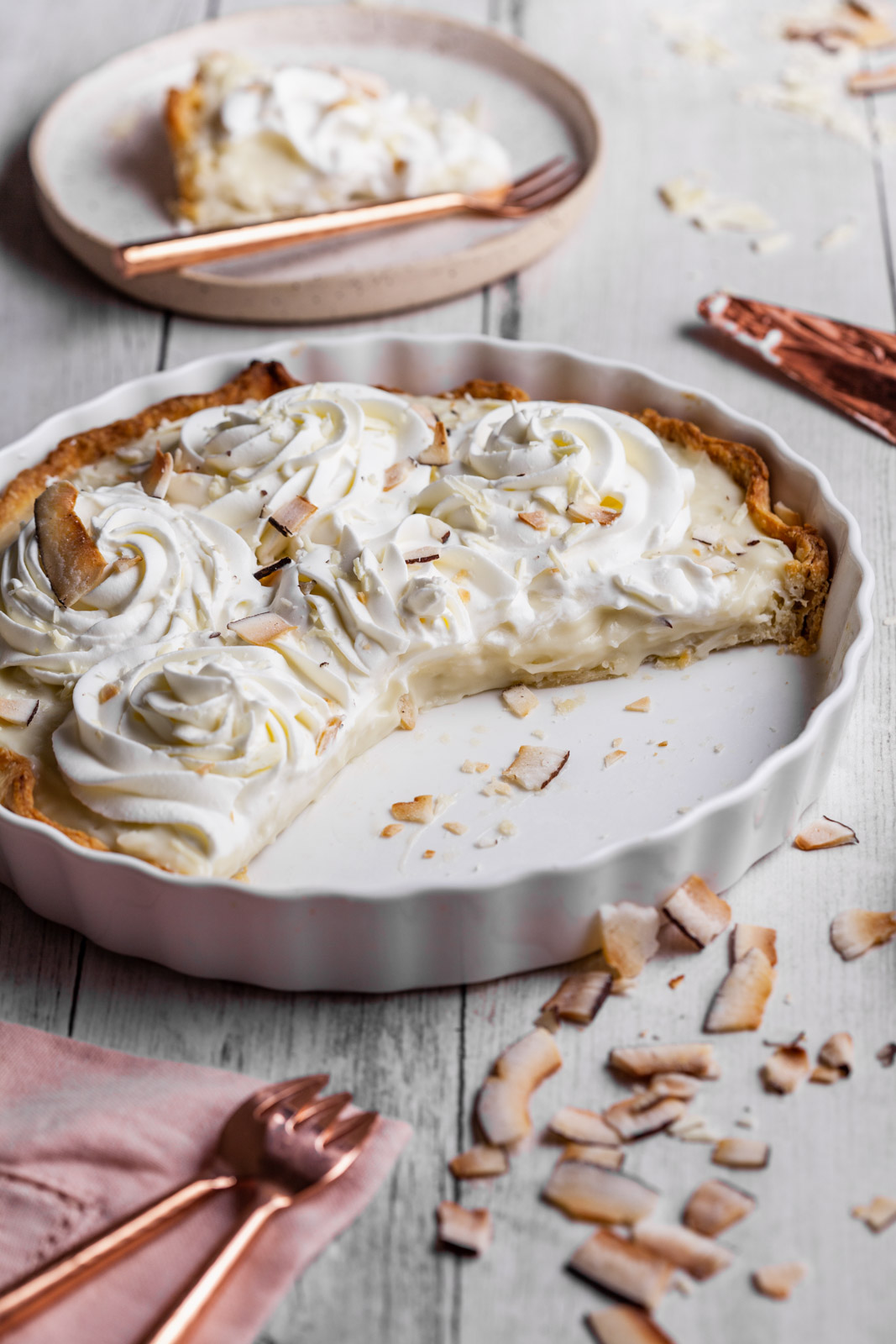