20 Jan, 2019 Fluffy Lemon Ricotta Waffles Joanne Rappos breakfast These lemon ricotta waffles are soft, tender and so flavourful. Adding ricotta makes them extra fluffy and you really get a nice lemony zing in them thanks to the good amount of fresh lemon juice and zest. waffles, ricotta, lemons, breakfast 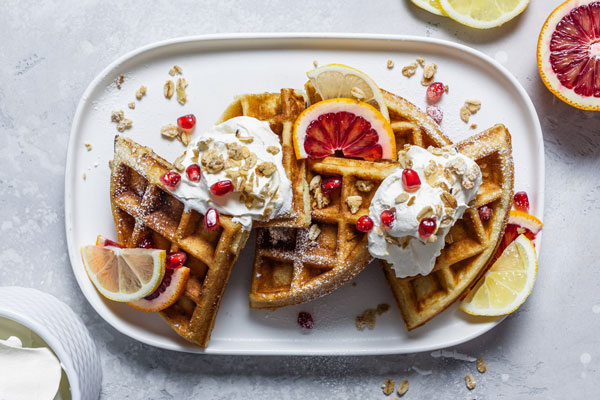 waffles, ricotta, lemons, citrus
These lemon ricotta waffles are soft, tender and so flavourful. Adding ricotta makes them extra fluffy and you really get a nice lemony zing in them thanks to the good amount of fresh lemon juice and zest. 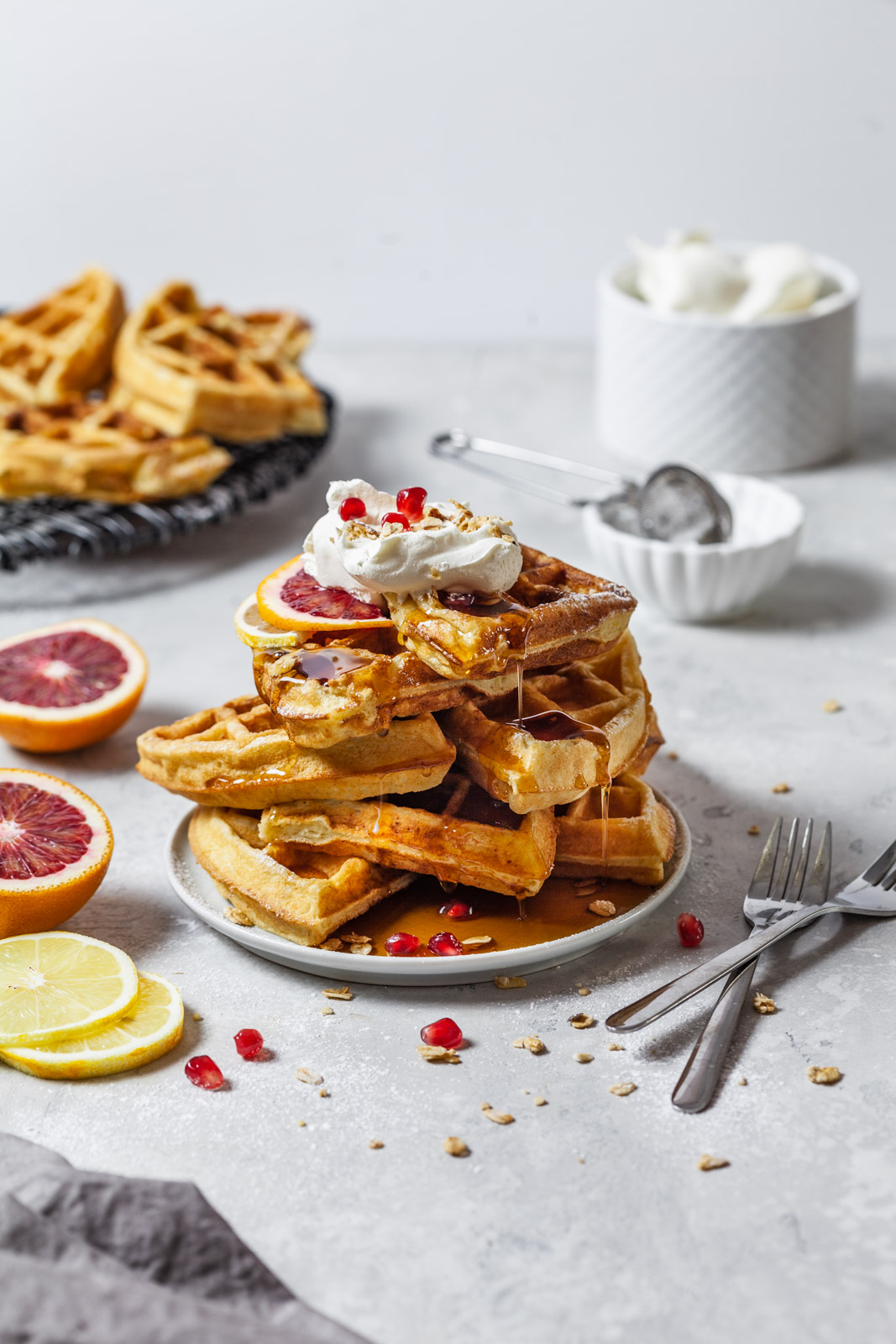 My husband is a very big fan of breakfast. I may have mentioned this before but he truly is a bottomless pit when it come to breakfast and always ends up ordering two of them when we are out for breakfast or brunch. The first one is usually your typical hungry man breakfast with a couple of eggs, hash browns, bacon and sausages. But he just can’t resist a stack of pancakes or a stack of waffles and that is what his second order usually includes. I’m pretty typical when I’m out for breakfast - if there is eggs Benedict on the menu that is what I will be getting. I can’t resist a good hollandaise sauce and every place makes it different and I love to taste them to compare. 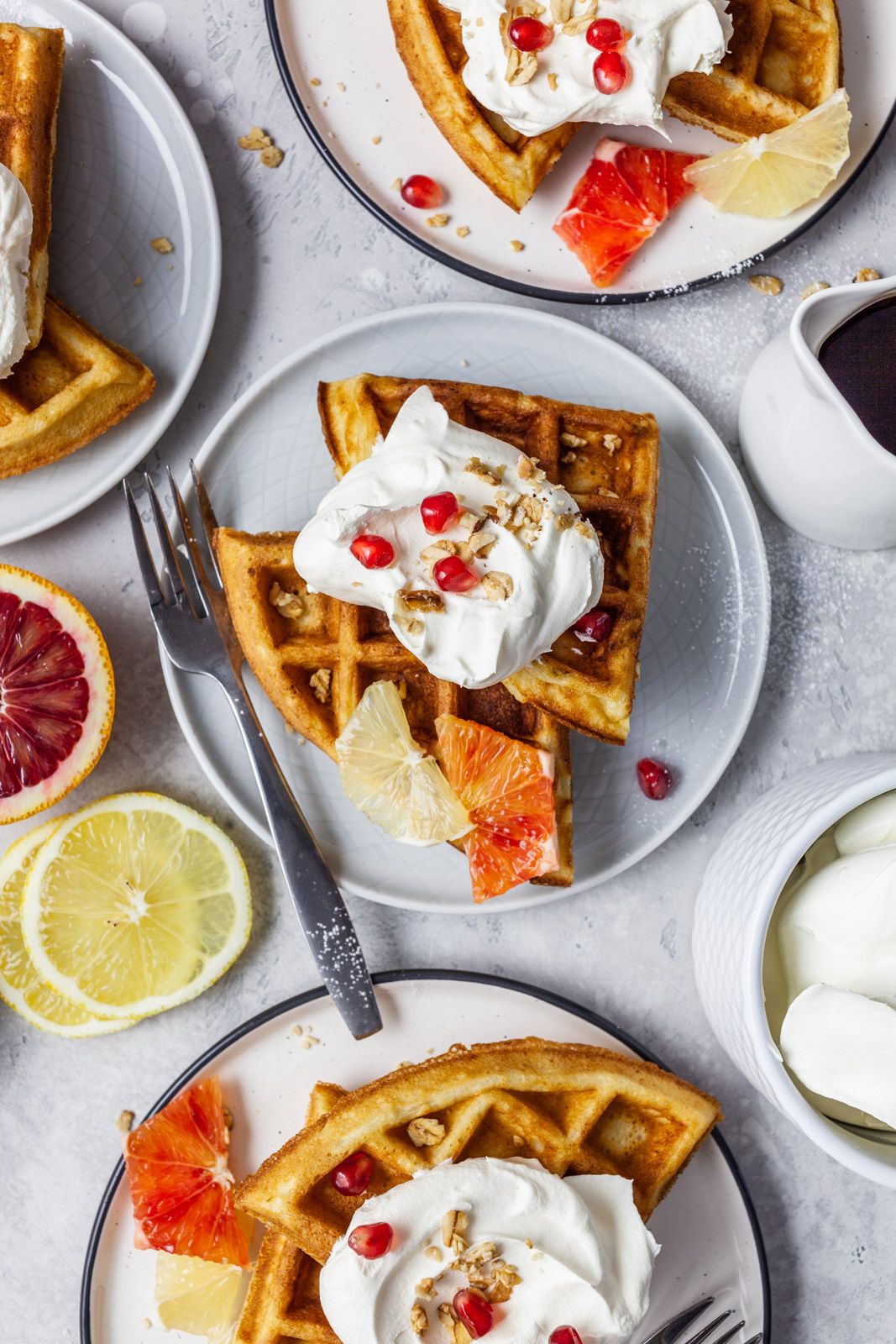 Back to these waffles though. I’m trying to make something special for hubby on Sundays especially since our schedules have changed a bit on a Sunday and have a little extra time to have a slow morning. Waffles are one of his favourites and so I’m trying to experiment with a few flavours to have a little variety. Lemon ricotta are my favourite flavour addition to pancakes and I had to try them in in waffles. As I expected, they were delicious and not shy when it comes to lemon flavour which I love. 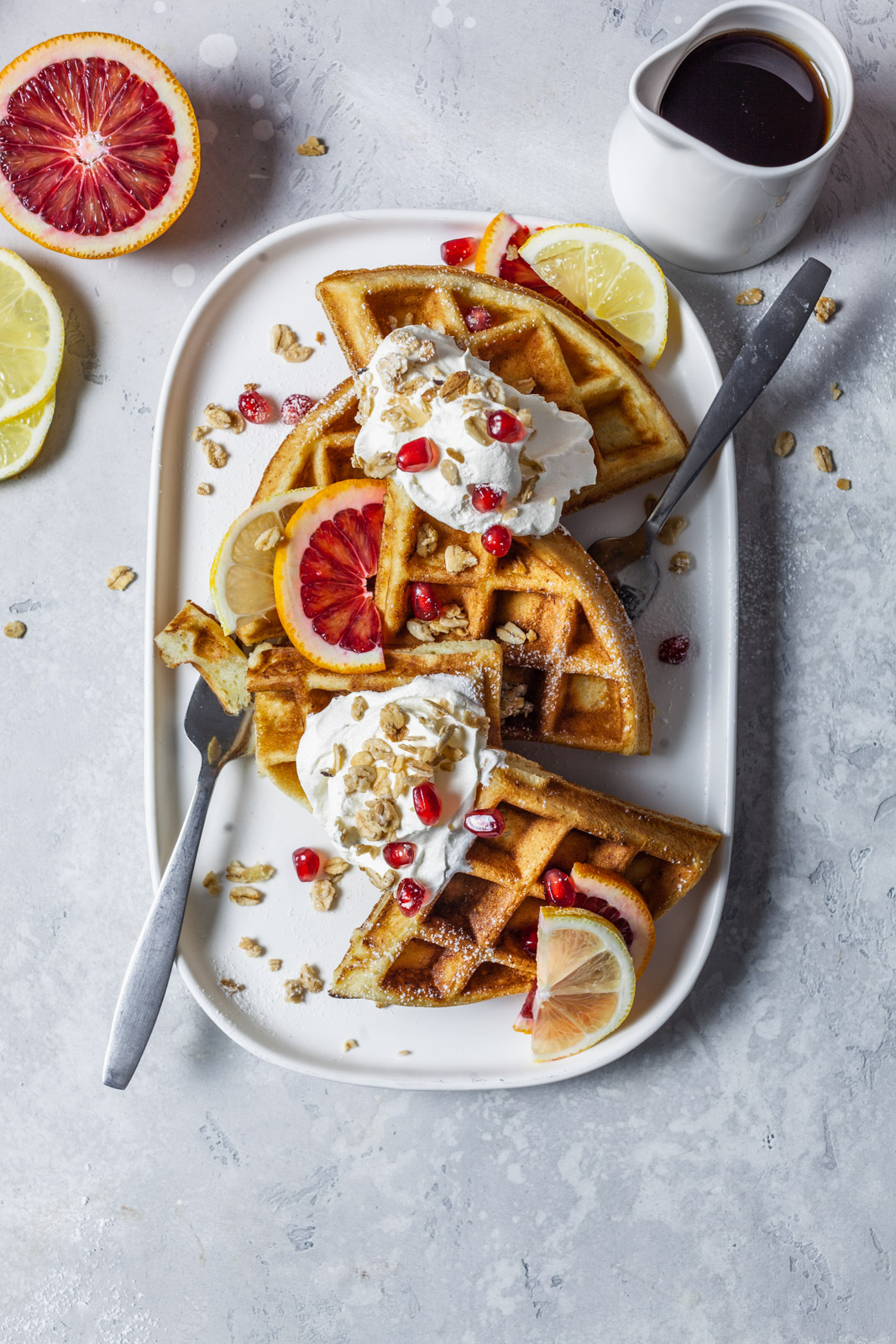 Why add ricotta to waffles? 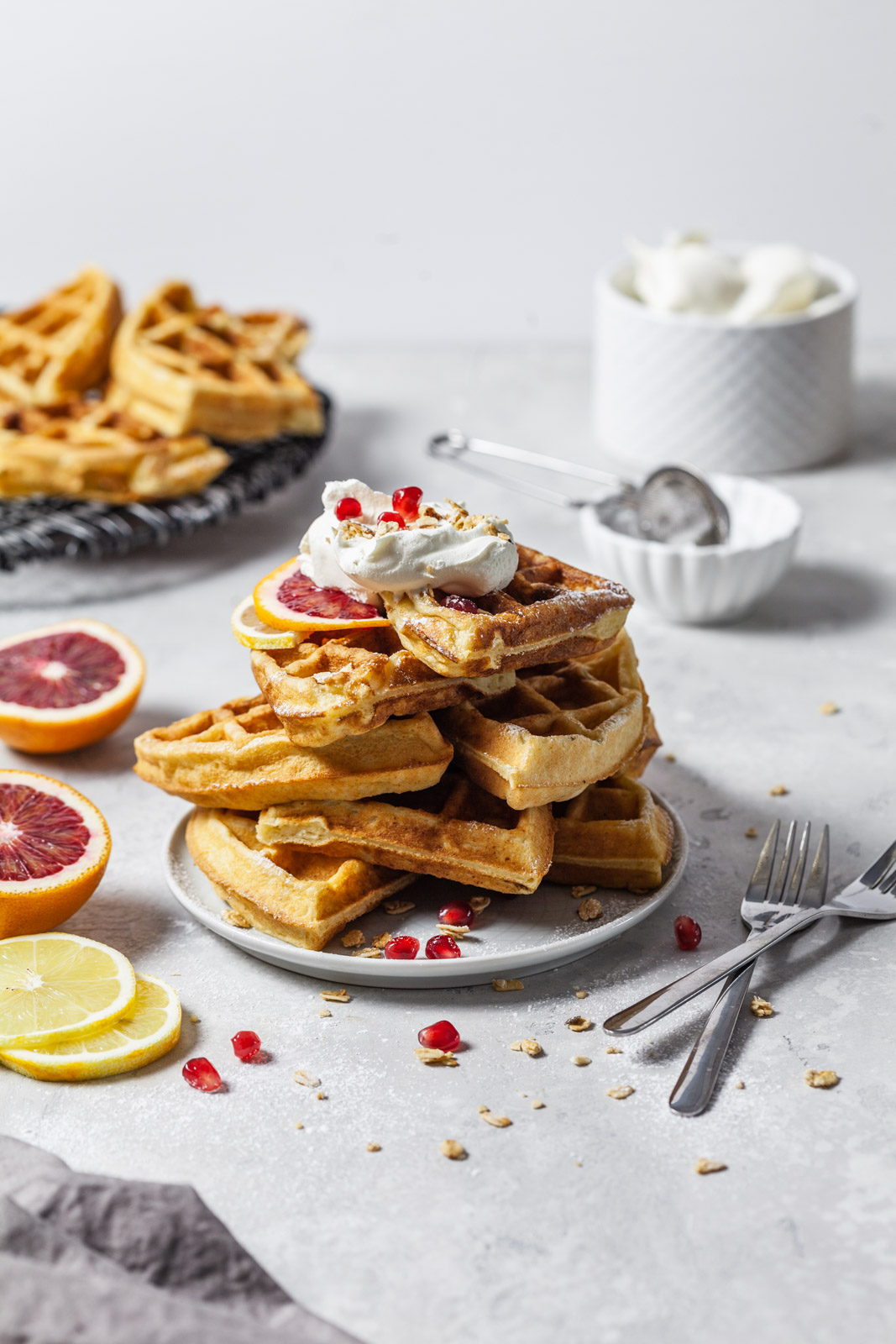 Lemon ricotta is quite a classic combo for baked goods and it works beautifully in waffles too. Topped with a dollop of whip, a little granola for a little crunch, sliced citrus and some pomegranate arils adding a nice freshness to them and of course some maple syrup. I was originally going to do blood orange glaze instead but I’m pretty classic when it comes to what I want to pour on my waffles and maple syrup was also hubby’s choice. I saved the blood orange glaze for a blood orange cake that I will be sharing in the near future. In the meantime I know you will enjoy these lemon ricotta waffles. I made these a few weeks ago as I try to stay a week ahead with posts but it’s looking like another snow day today so I think I’m going to heat up that waffle iron and get to making some more of these.

Recipe adpated from The Food Network and Joy the Baker 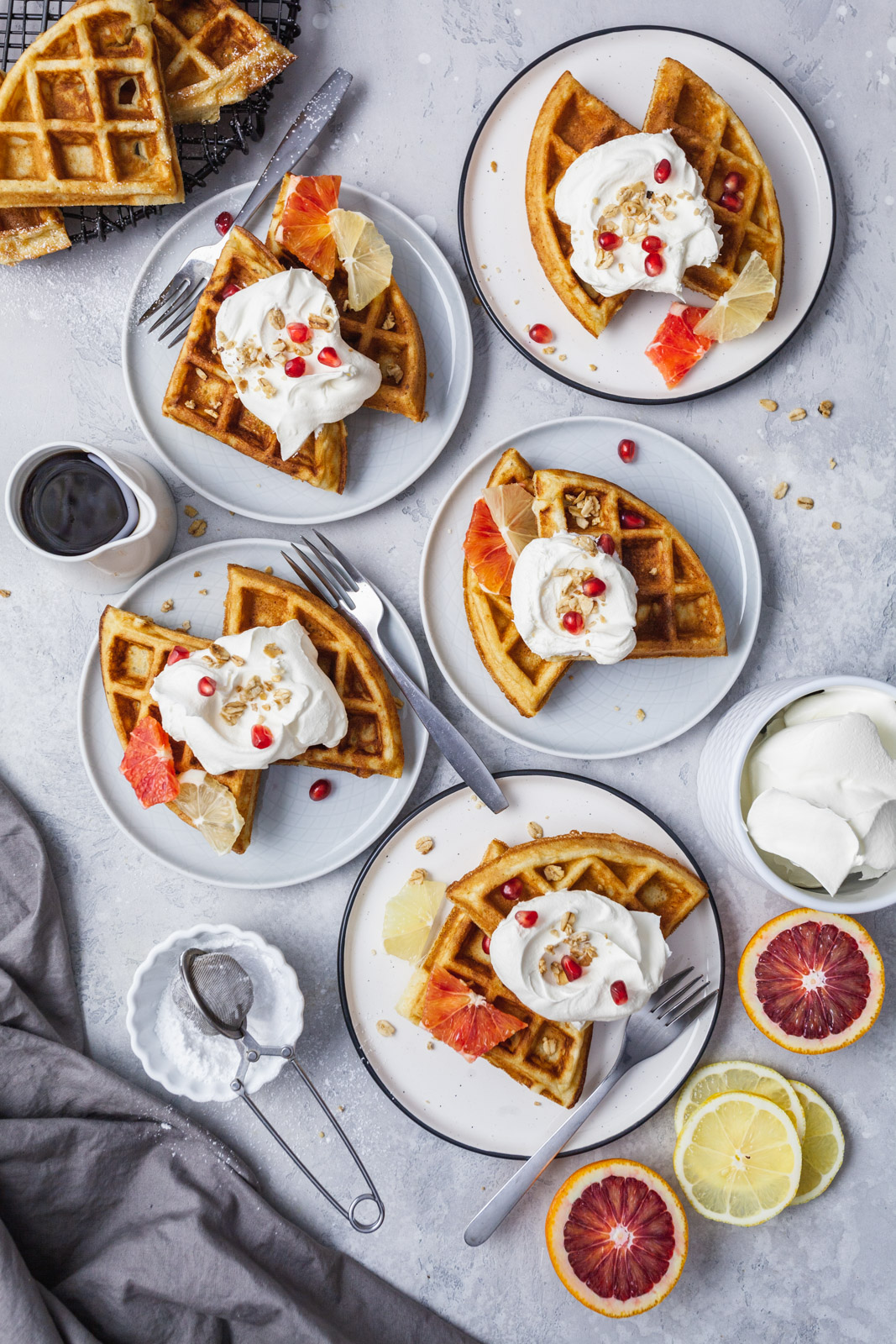