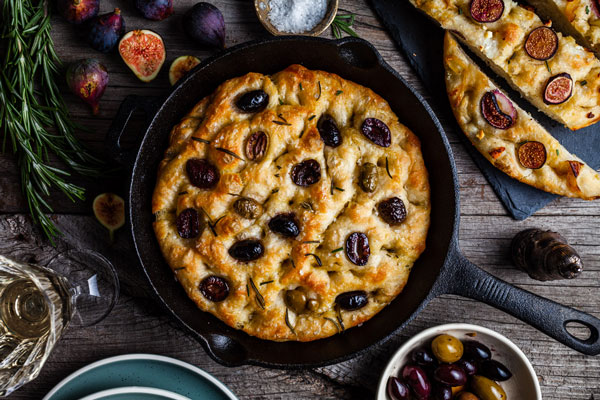 Focaccia is a flat oven-baked Italian bread similar in style and texture to pizza dough that is usually served as an antipasto, appetizer, table bread, or snack. There are many versions but the most famous is focaccia di Genova. This recipe is closest to the latter. It requires no kneading or stretching and results in a crisp, olive oil-scented crust and a puffy, moist, crumb with just the right amount of tender chew It’s the easiest bread you can imagine making. All it takes is a bit of time as it rests overnight and then again for another two hours or so before baking. It is worth all the planning for because Its basically no effort with a fabulous result. 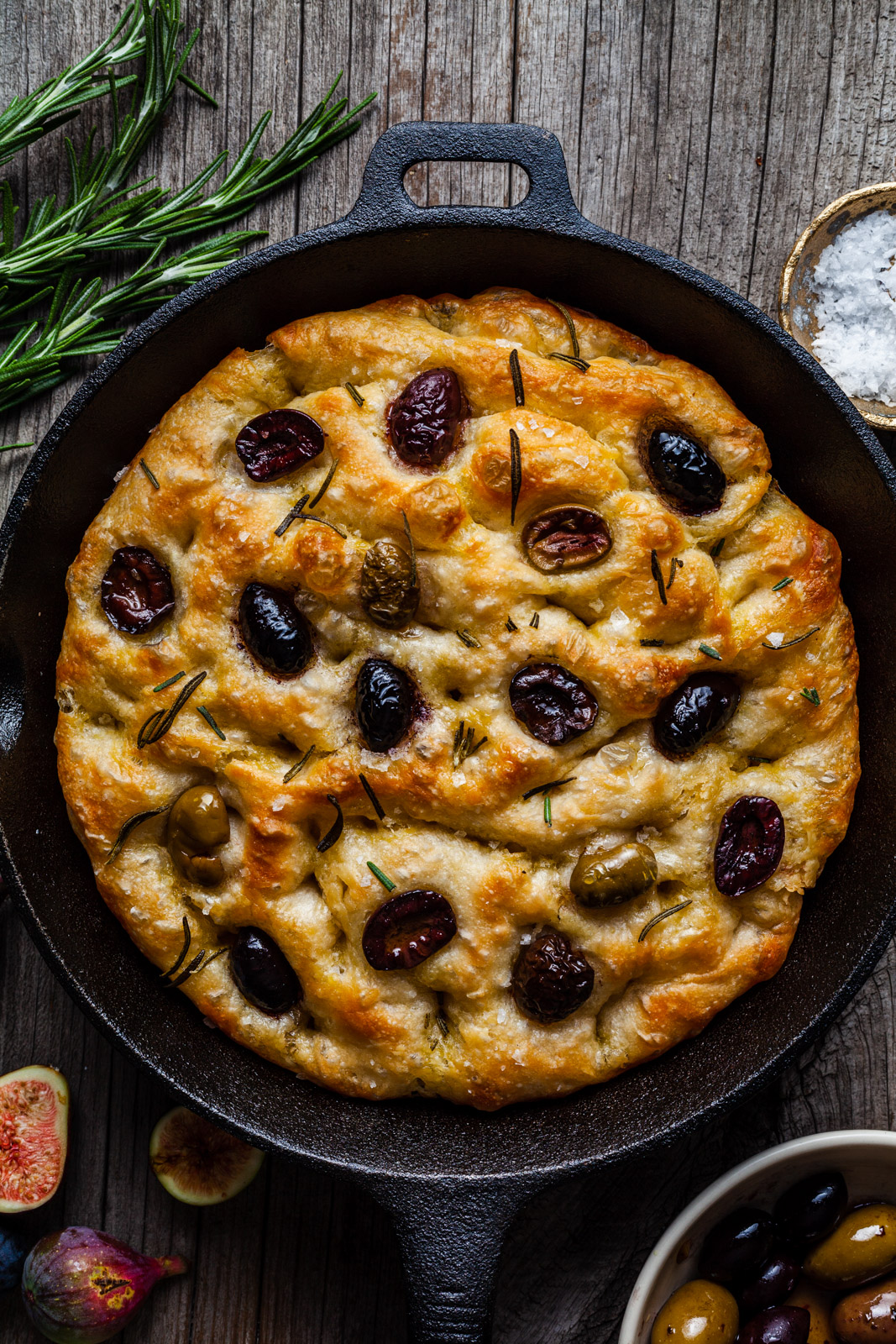 I chose a no knead recipe as my standing mixer dough hook attachment isnt working at its fullest potential right now and I really have to be in the mood to knead by hand for 10 minutes or longer (that’s called pure laziness btw). So I went on a search for a truly easy no knead  recipe that yields the best texture with barely touching the dough. My two favourite recipes are from AlexandraCooks.com and Seriouseats.com. I often turn to those two sites for advice and also for guidance and flavour inspiration. This time I chose Alexandra’s recipe over Kenji’s for one reason only. I love that Alexandra’s recipe calls for the bread to sit overnight in the refrigerator instead of on the counter. For some reason the out of sight out of mind I prefer - and in the fridge was the direction I went with. When it comes to the pan the recipe I favoured more calls for baking the focaccia in pie plates/pans. I used one baking pan and one skillet and the difference was that the one in the skillet baked up crispier and I much preferred it in the skillet. So if you have two skillets I recommend using them for this focaccia. We inhaled both but you can also freeze one while you enjoy the other. Like I said though ours didn’t last long at all. 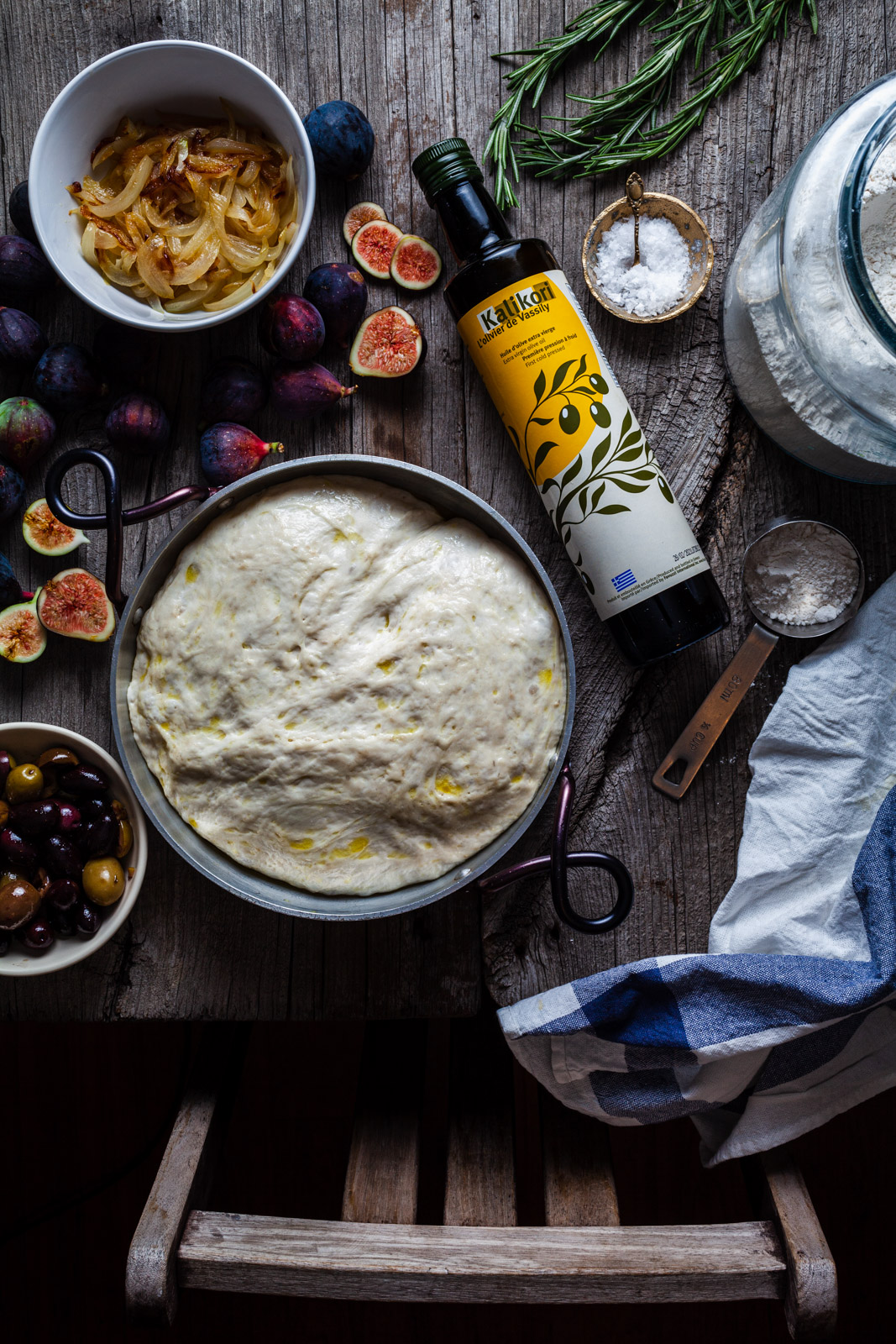 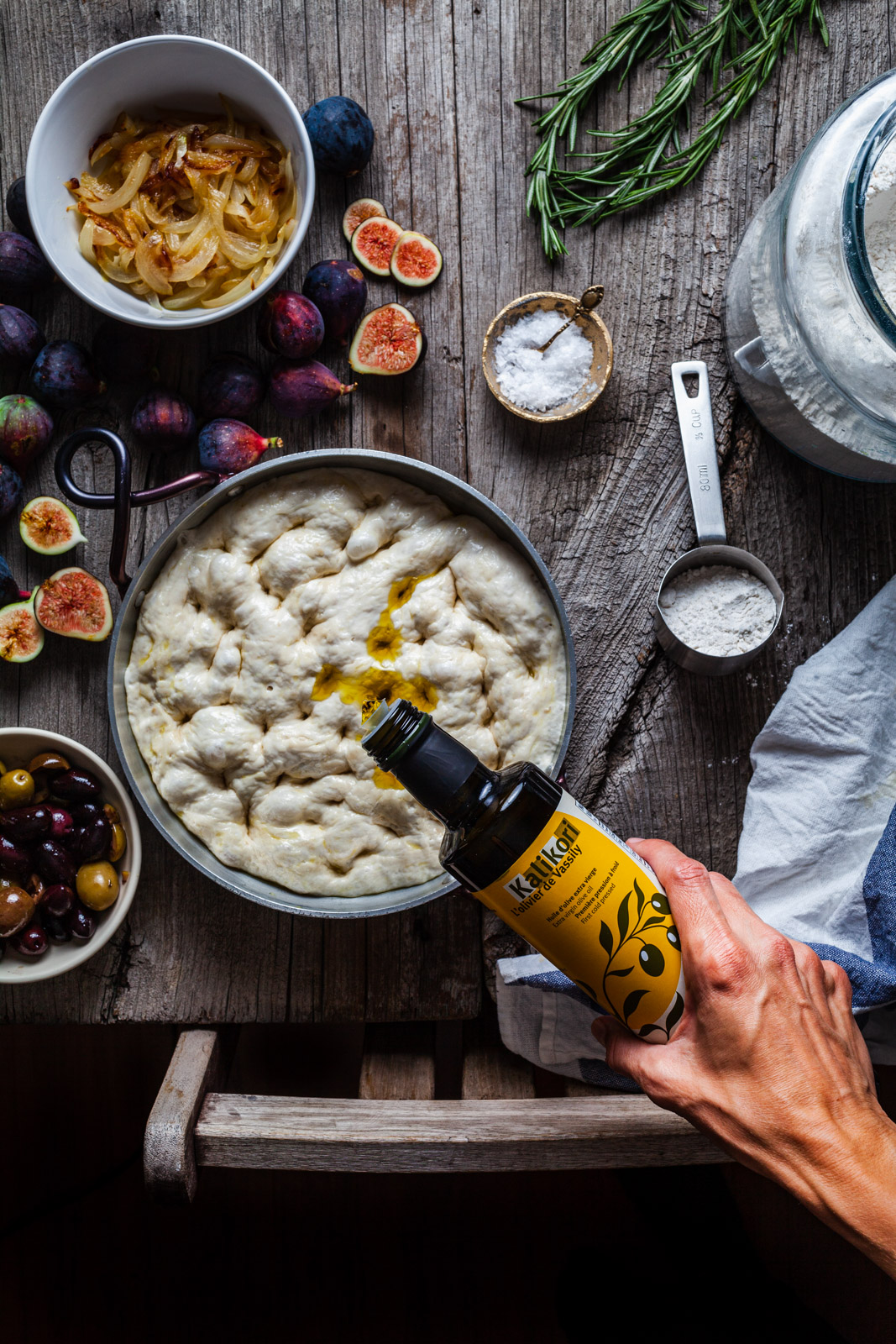 The choice in flour and olive oil is essential for the preparation of this recipe. A good quality flour is a must and as for the choice of olive oil, it obviously needs to be very fragrant, fruity and first cold pressed extra virgin. I chose an olive oil that is just that. Kalikori Extra Virgin Olive Oil comes directly from an olive grove of vatsikes olive trees in the hills near Kalethéa, in the Kalamata region of Greece. It’s a grove on family land owned, nurtured and harvested by the Ligris family since the first grove was planted in 1950. The quality of Kalikori is very evident – from the smell, the feel and of course the taste. You may also notice a slight peppery finish to the oil. This comes from the first pressing of the olives and also gives it a distinct green colour. Kalikori wants to make sure that their product is of the highest quality and as a result each bottle comes with a best before date. 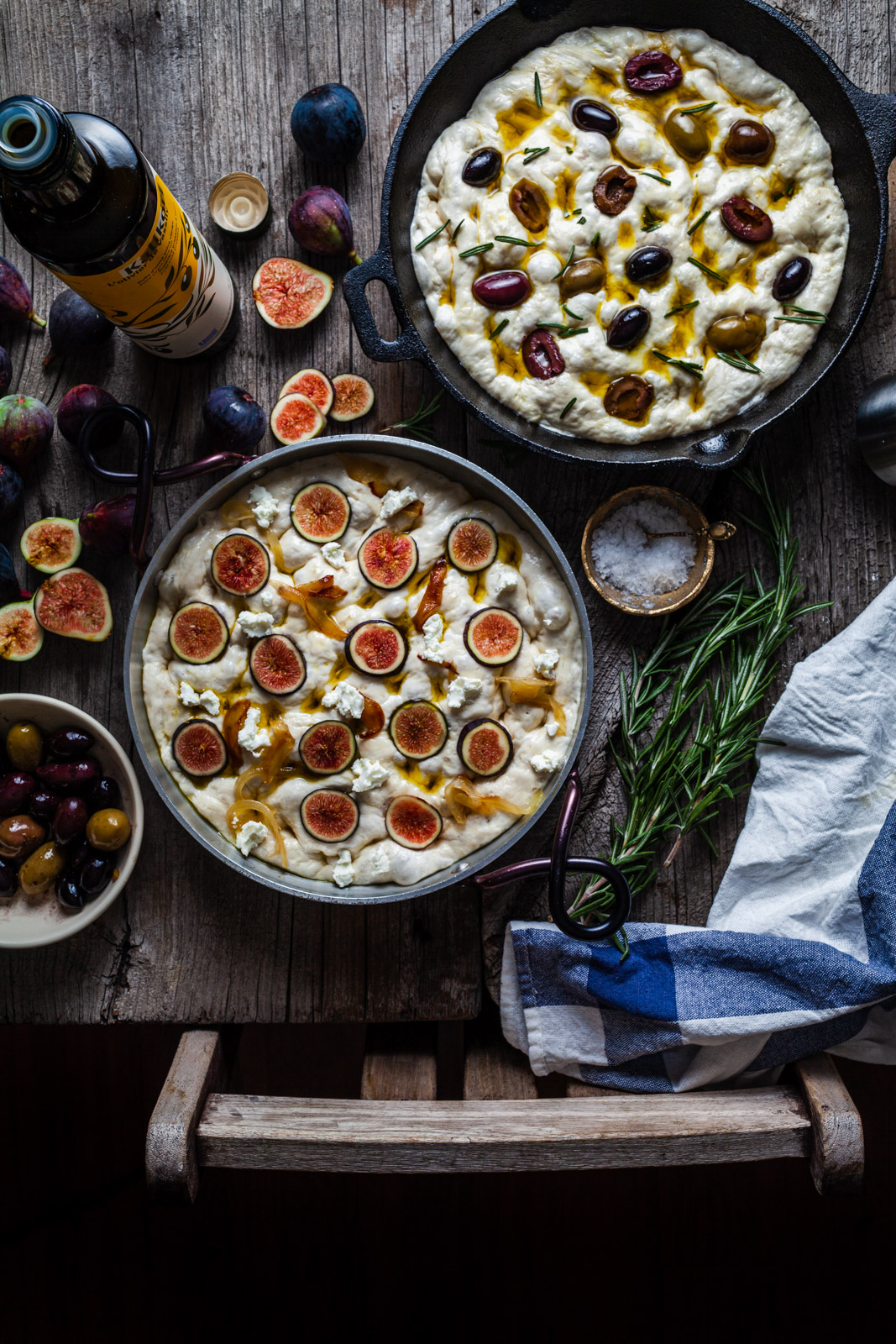 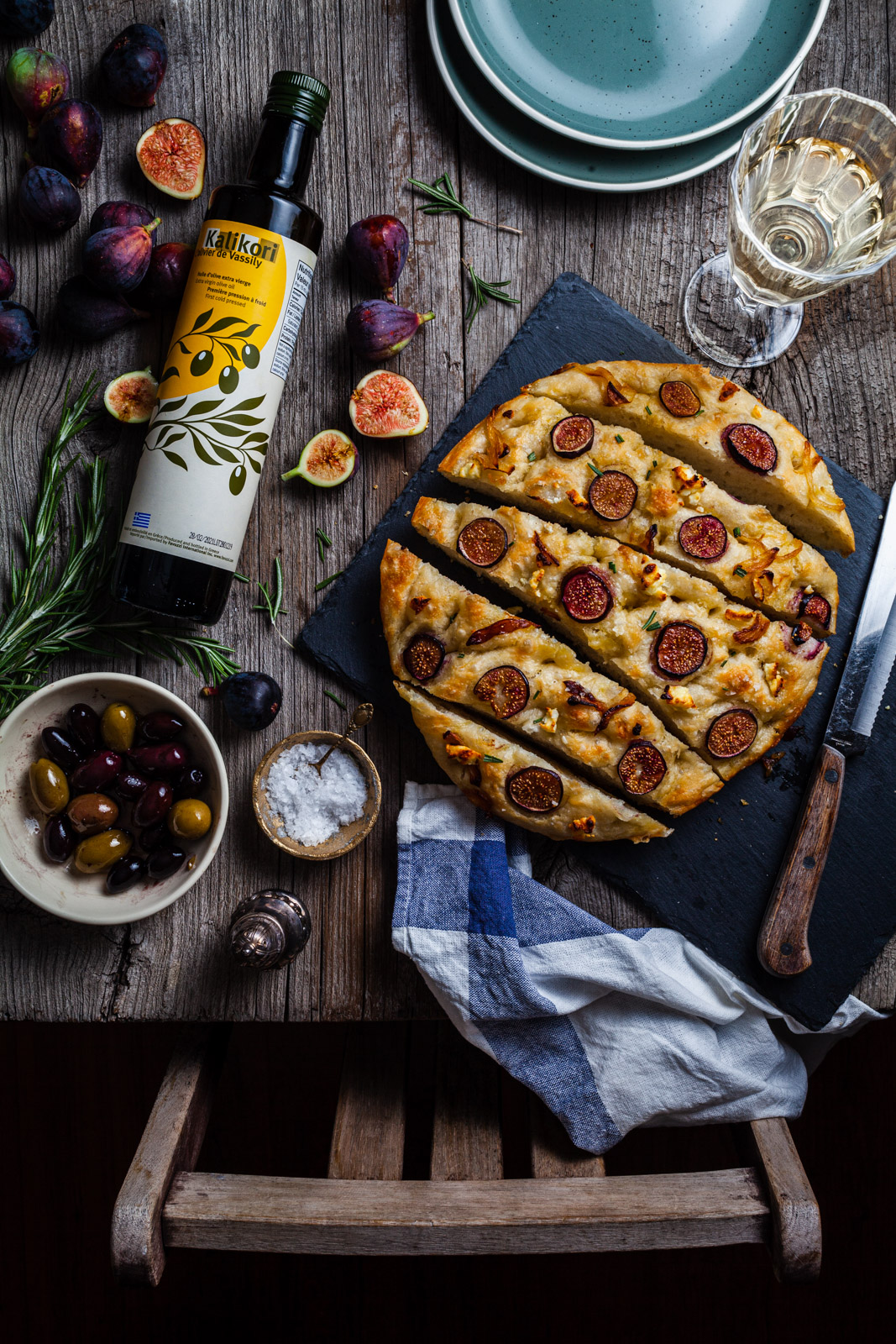 This recipe is easy to make, and tastes so rich and wonderful with the addition of fresh rosemary, olive oil and flaked sea salt…but also great loaded with figs, caramelized onions and goat cheese too! Plain is also delicious. This focaccia is perfectly crisp on the outside and soft and chewy on the inside. It has a moist but airy crumb sandwiched between thin but ultra-crunchy top and bottom crusts, thanks to a generous amount of olive oil in the pan and on top of the dough. If you haven’t tried making focaccia or want to try a very simple recipe for focaccia this is definitely the one for you. You will love it and you can dress it with any topping you like or no topping at all. Have fun coming up with flavour combos!

I have partnered up with Kalikori Olive Oil to bring you this fabulous recipe, but all opinions are my own. Thank you for supporting Olive & Mango. 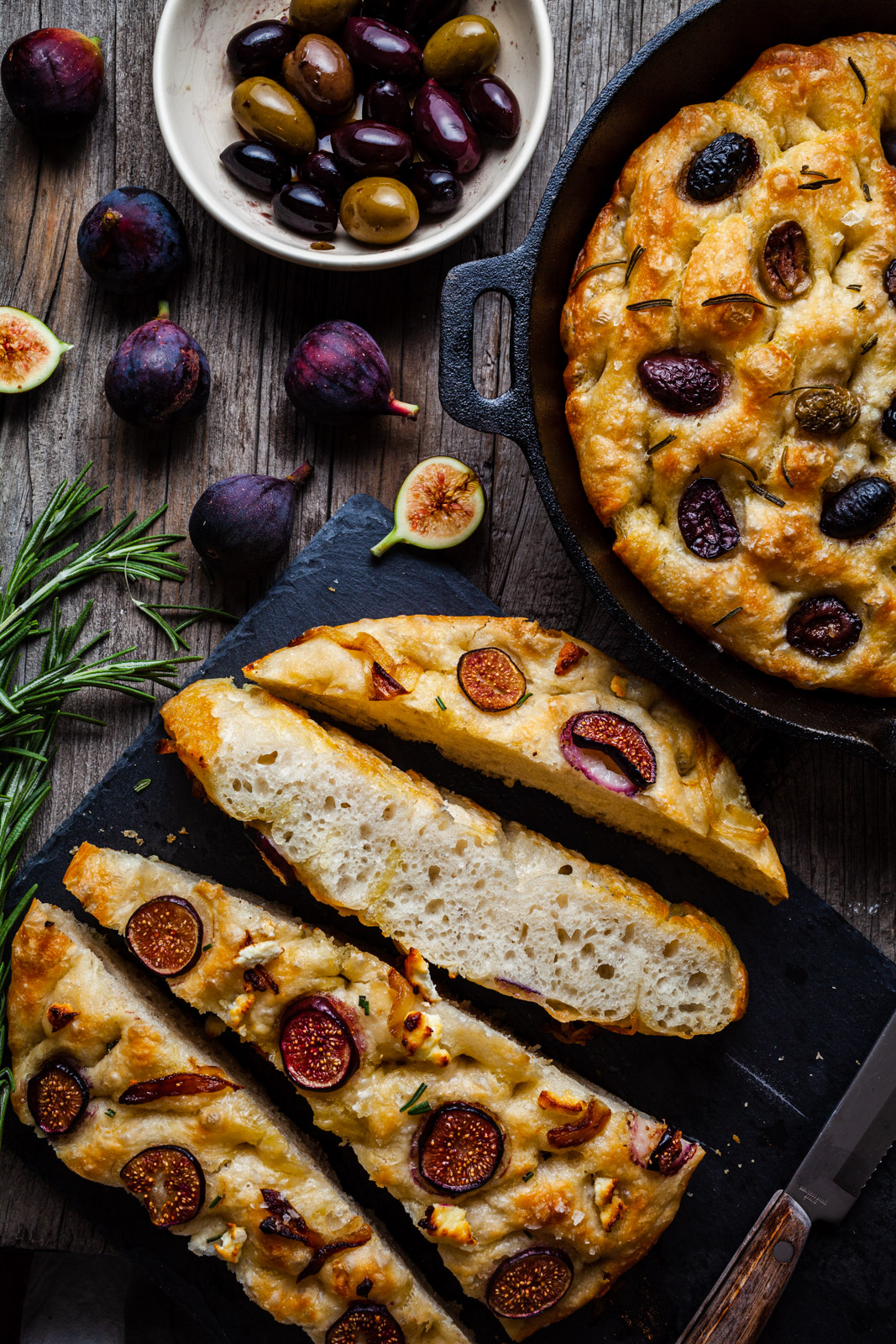 For the olive and rosemary (divide ingredients between two pans) 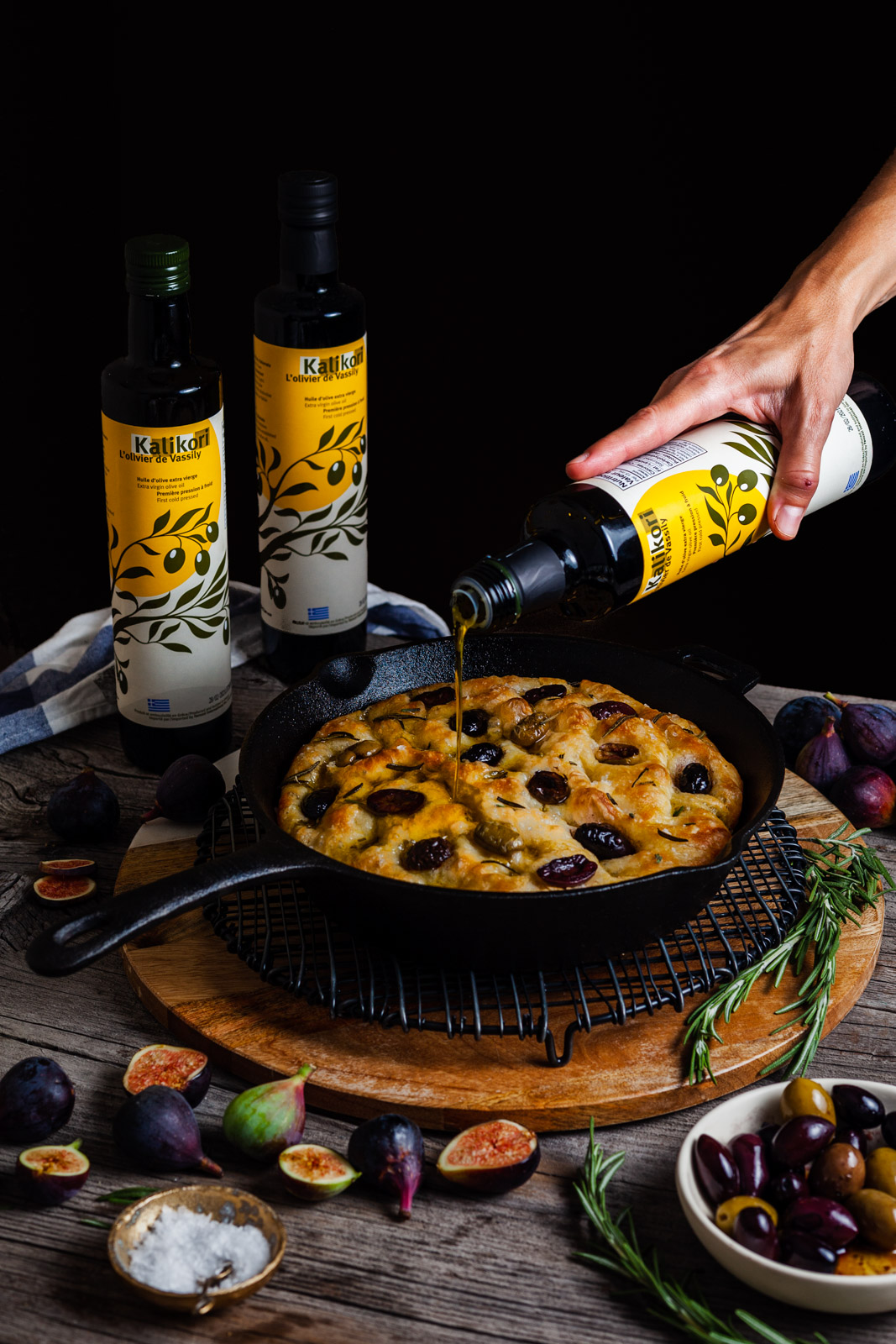 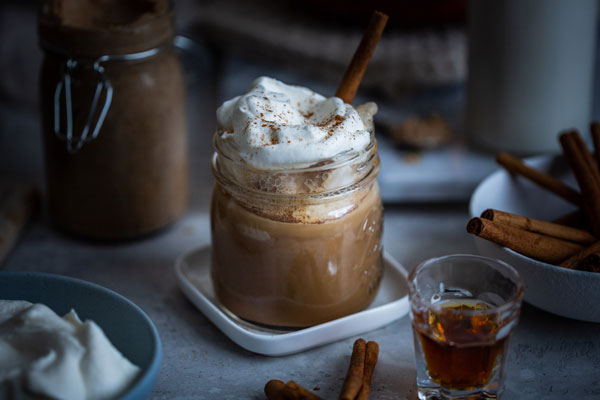 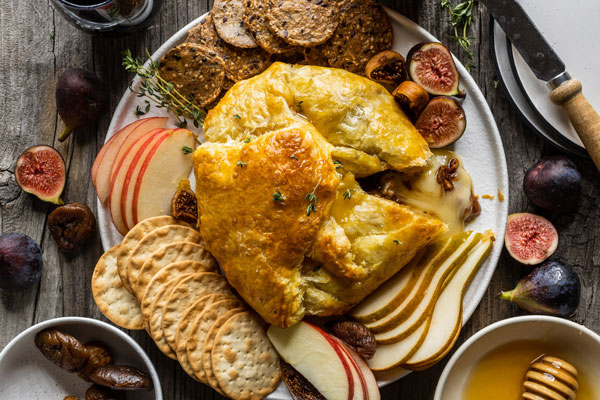 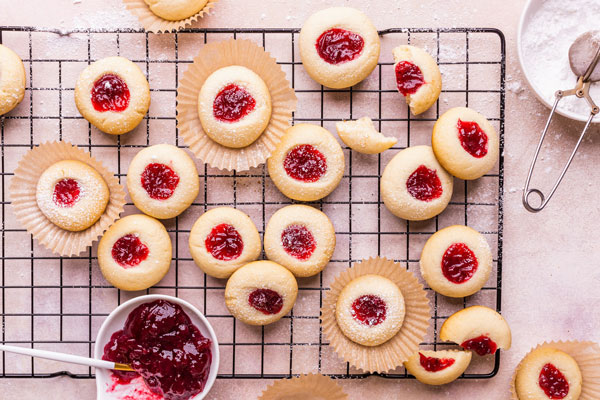