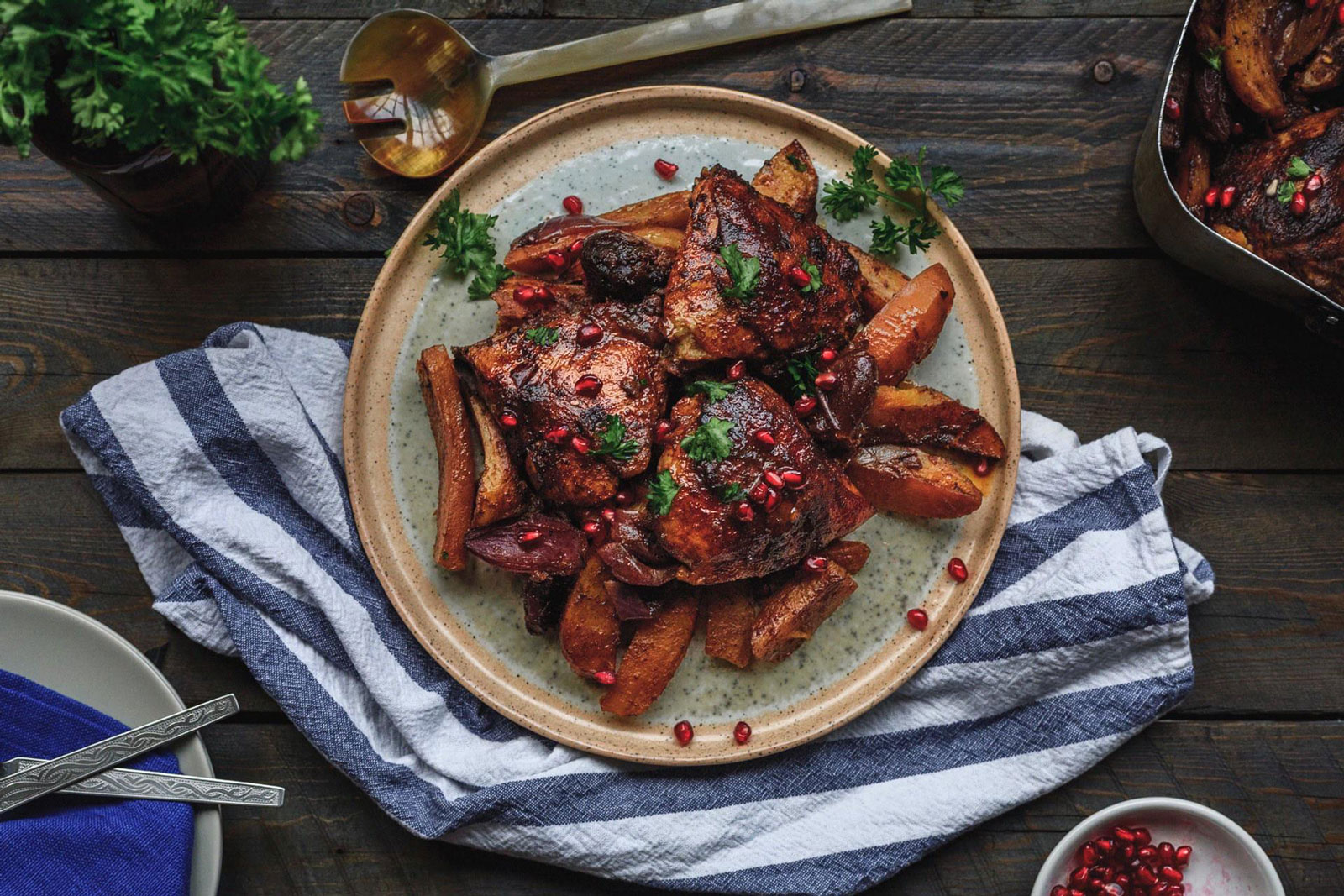 Two pomegranate posts in a row!! What?!?! Purely coincidental but I won’t be apologizing about it cause they are both wonderful. In fact it might even be a good idea to make this dish followed by that pomegranate cake for dessert. Making both together or individually is definitely a good idea. This roasted chicken dish is wonderful. 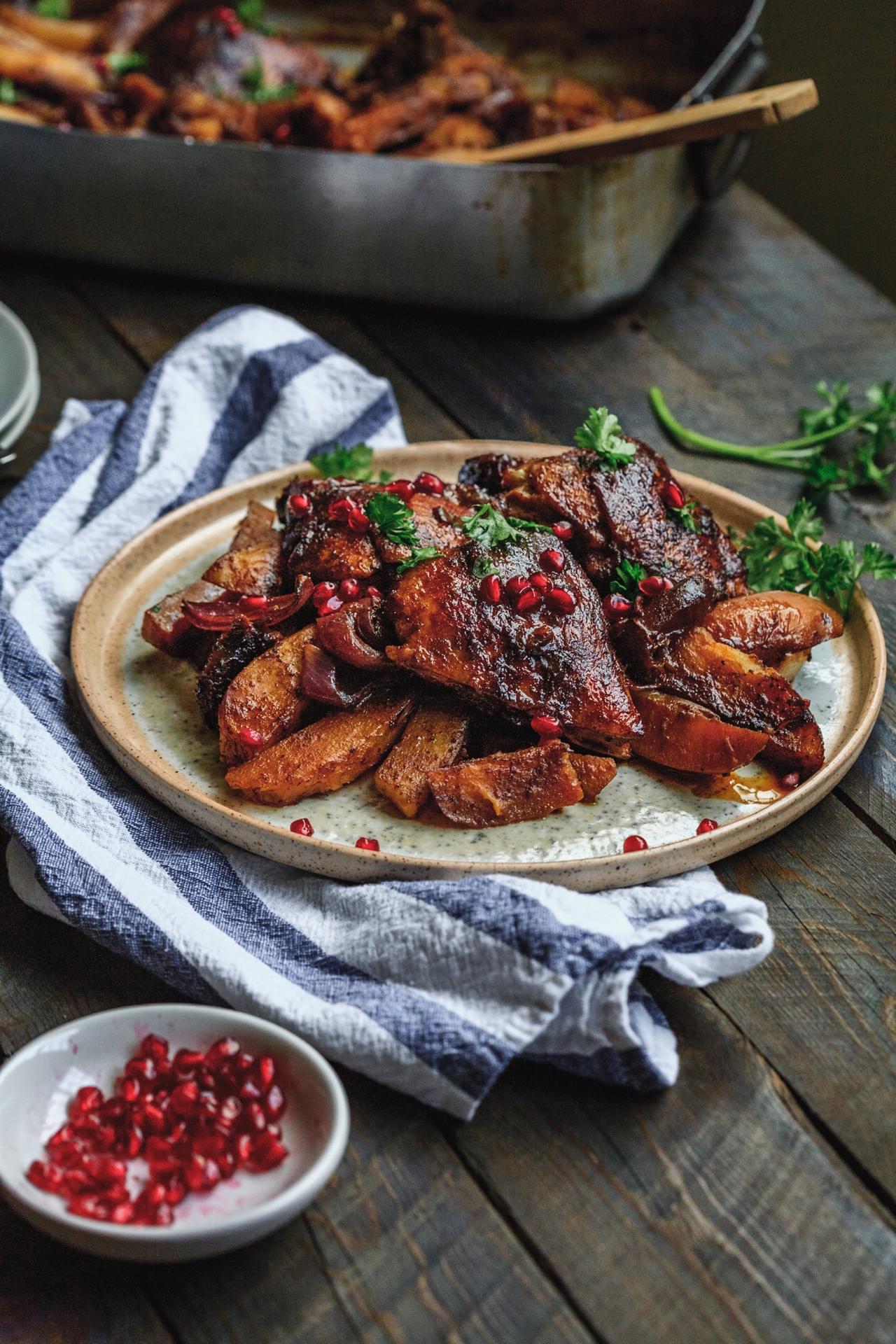 How did I come across it? I was searching for a good pomegranate molasses chicken recipe. I was hoping to find one that required it as an ingredient part of the chicken dish itself, not just as a glaze. Using pomegranate as a glaze is great on any meat but I wanted something a little different. So of course Yotam Ottolenghi never disappoints! This recipe is based on his, so no doubt it’s wonderful. I changed a few things up based on some other pomegranate recipes I had sifted through and the outcome is fab and feels more like a meal I would put together. Plus some of the substitutions were out of necessity – not having particular ingredients on hand. 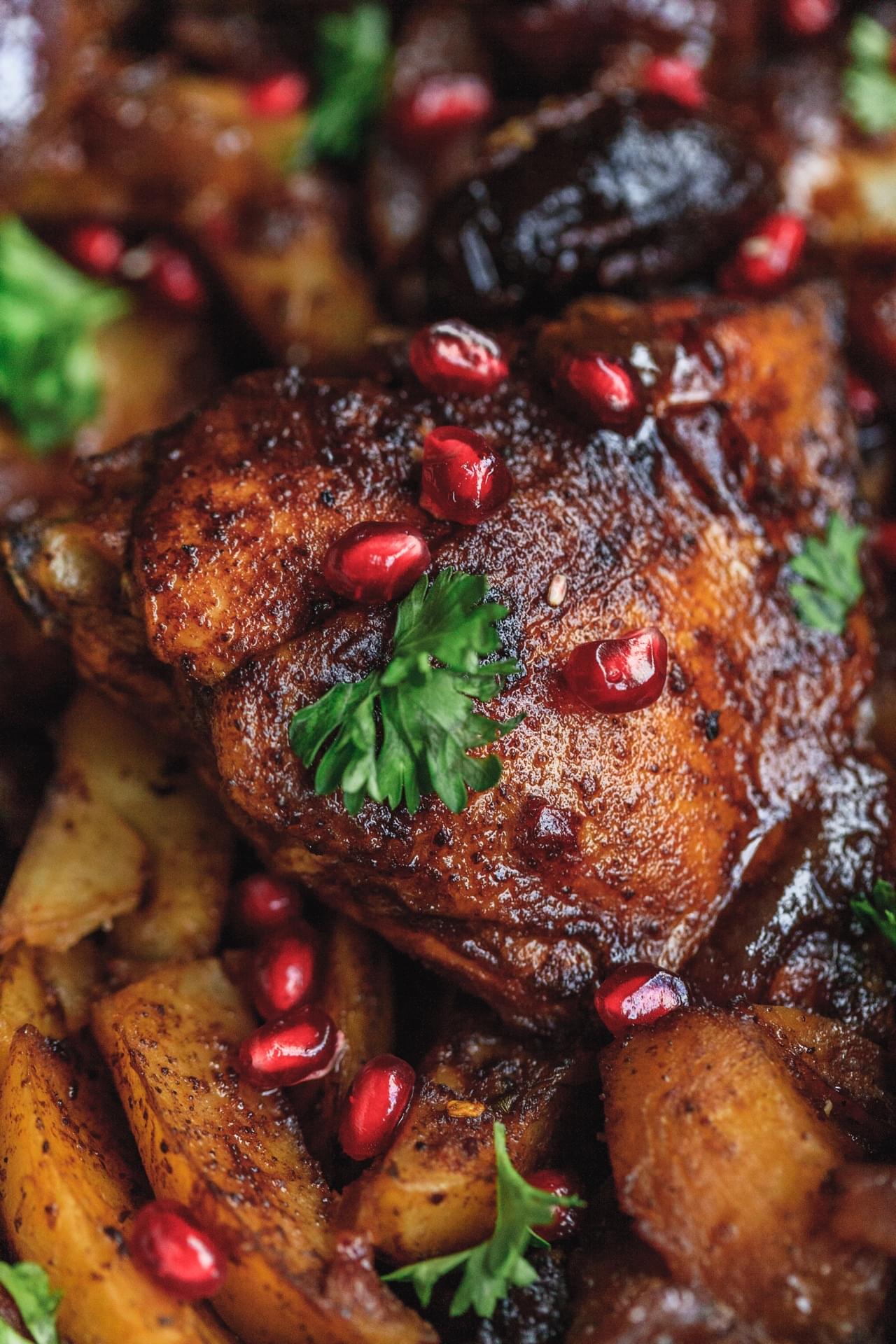 He makes his with prunes and I swapped them out with dates as I prefer them over prunes. I also added some chili flakes for a slight bit of heat and also some tomato paste which balances the sweetness and tartness a bit I thought, and also helps develop the texture of the sauce. I used mango powder instead of chutney because that’s all I had at the time and I thought it was a great swap, but if you do have the chutney it would be delicious with it too. Oh and I also used honey over maple syrup because I love our local honey and I thought it would be perfect for this dish making the sauce even more fragrant! That pretty much sums up the changes. I also used thighs instead of legs but I don’t think that counts as much of change as cooking time was pretty much still the same. 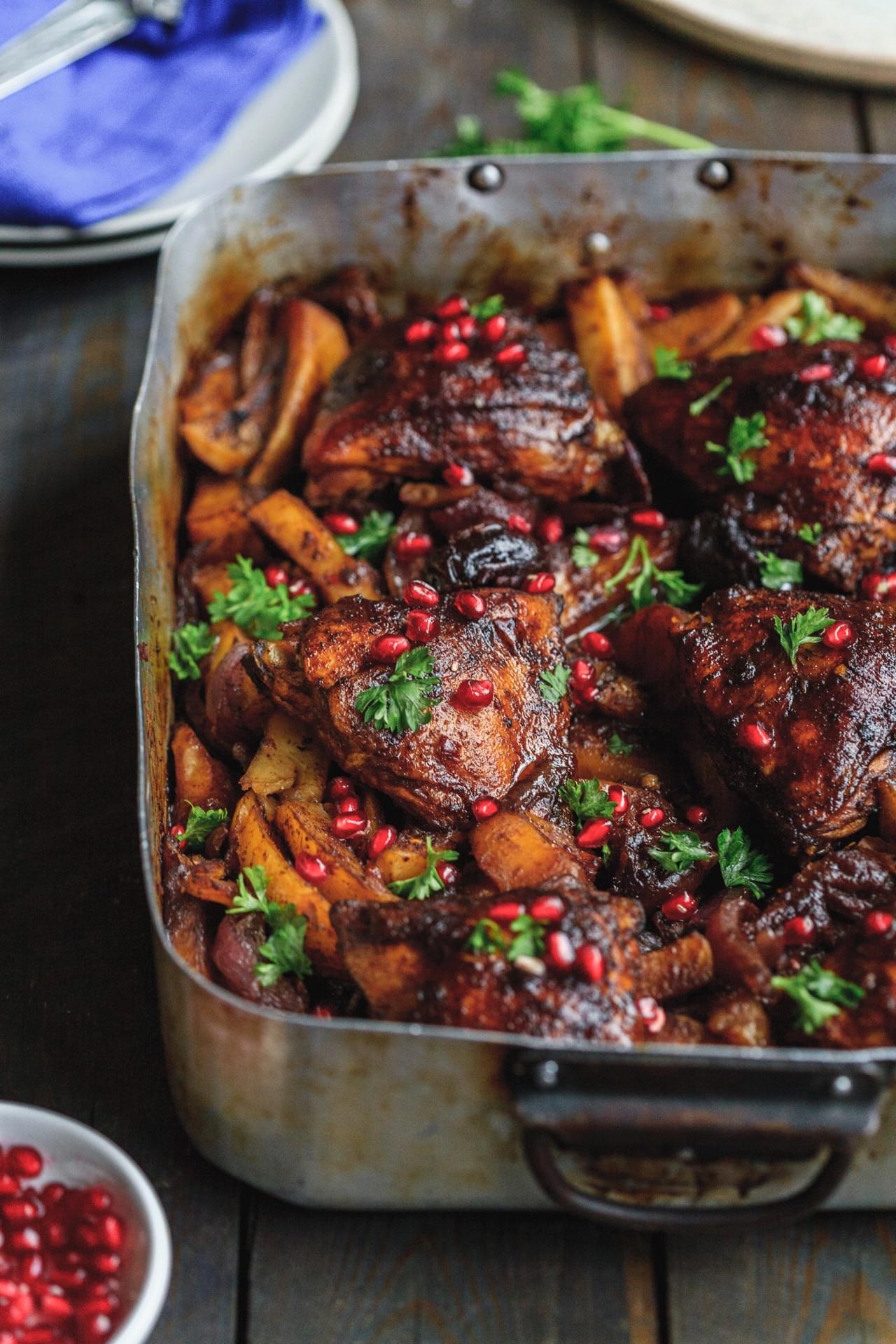 Speaking of cooking time, this dish does take a while to roast in the oven. It takes almost two hours but it’s not a fussy two hours. I checked mine after the first 15 minutes when reducing the temperature and then again halfway through to baste and check the chicken and potatoes for doneness. The hands on part is really minimal. The sauce is simple to whip up and the onions and potatoes being chopped is the most labor intensive job in the recipe. I do recommend it as a weekend or holiday meal when you are kicking around at home.

One of the easiest Sunday lunches you will make

You just toss everything with the sauce in the pan seal it off and the magic happens while everything roasts. The dates get soft and almost melt into the sauce adding some body and texture to the sauce. The onions caramelized and do the same for the sauce. The onion disintegrates into the sauce giving it all sorts of yummy flavour - sooo good! The chicken actually gets a lovely colour from the sauce – it doesn’t just steam cook under the foil but roasts to a lovely deep orange-reddish shade as do the potatoes. To get a crispier skin, once it’s done cooking I put it under the broiler for a few minutes and done. 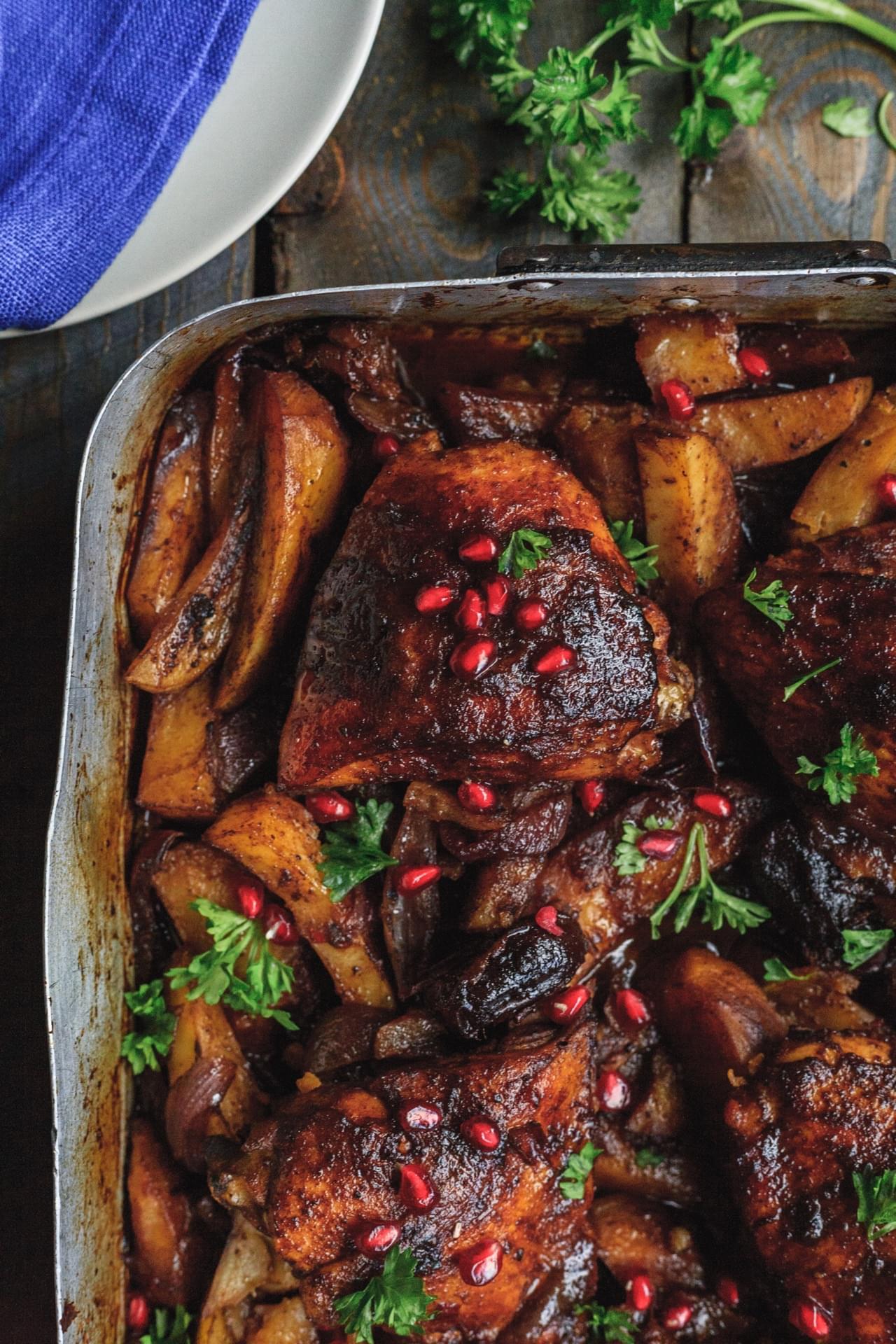 I have made it several time since as my husband loves it. He loves the sauce and pan juices and he says the potatoes are addictive. They soak up all the wonderful flavours and in Greek I would say “σαν λουκούμι είναι” (san loukoumi eeen’eh) not a great word by word translation for what I’m trying to say but an expression that denotes melt in your mouth good. Basically comparing it to Turkish delight – doesn’t translate well but if you’re Greek you get it. Bottom line this is a one pan dish that tastes like you spent hours and hours prepping and roasting when it takes minimal effort to make and you and everyone who tastes it will adore it. A definite must try if you’re looking for a different kind of roasted chicken dish. 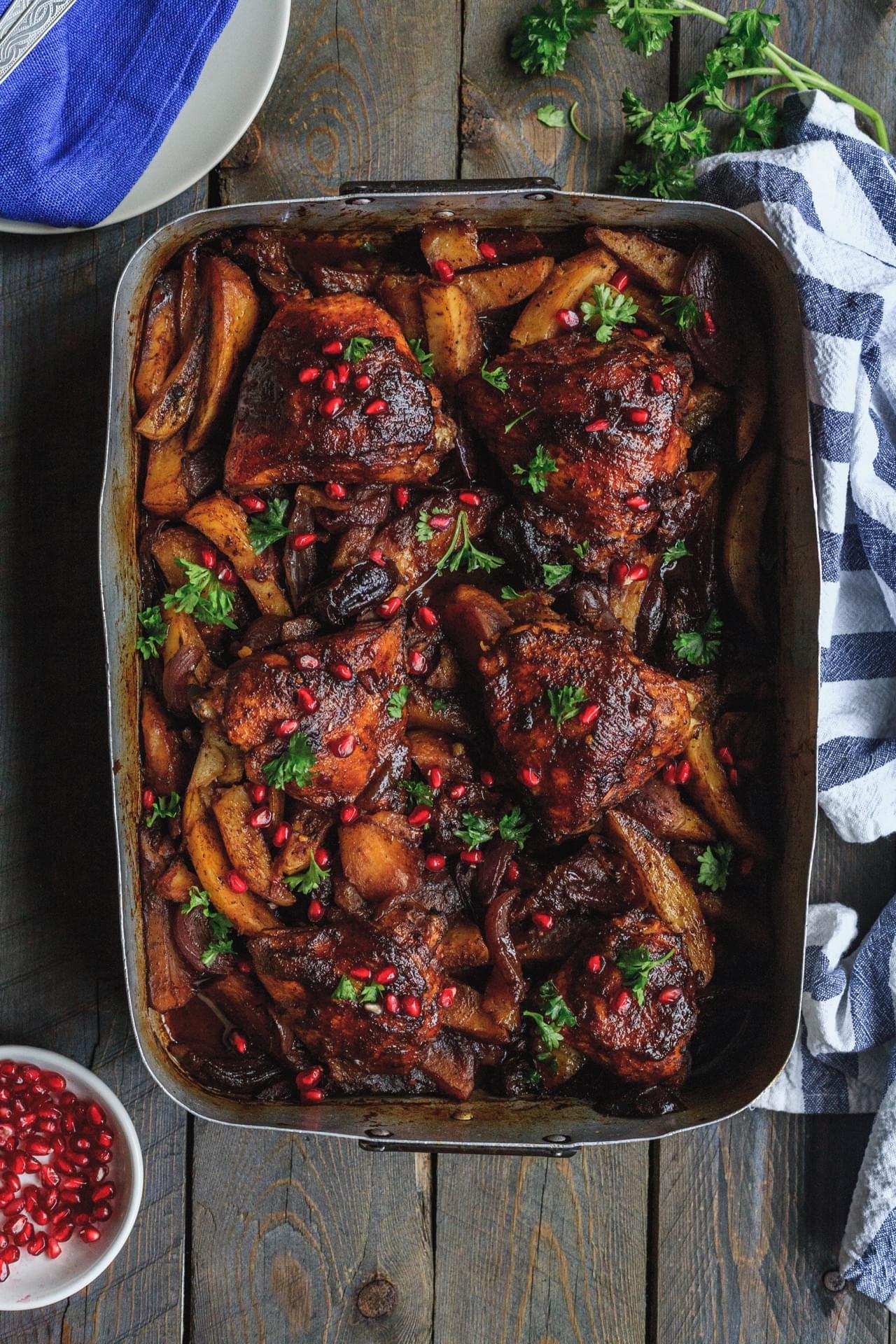 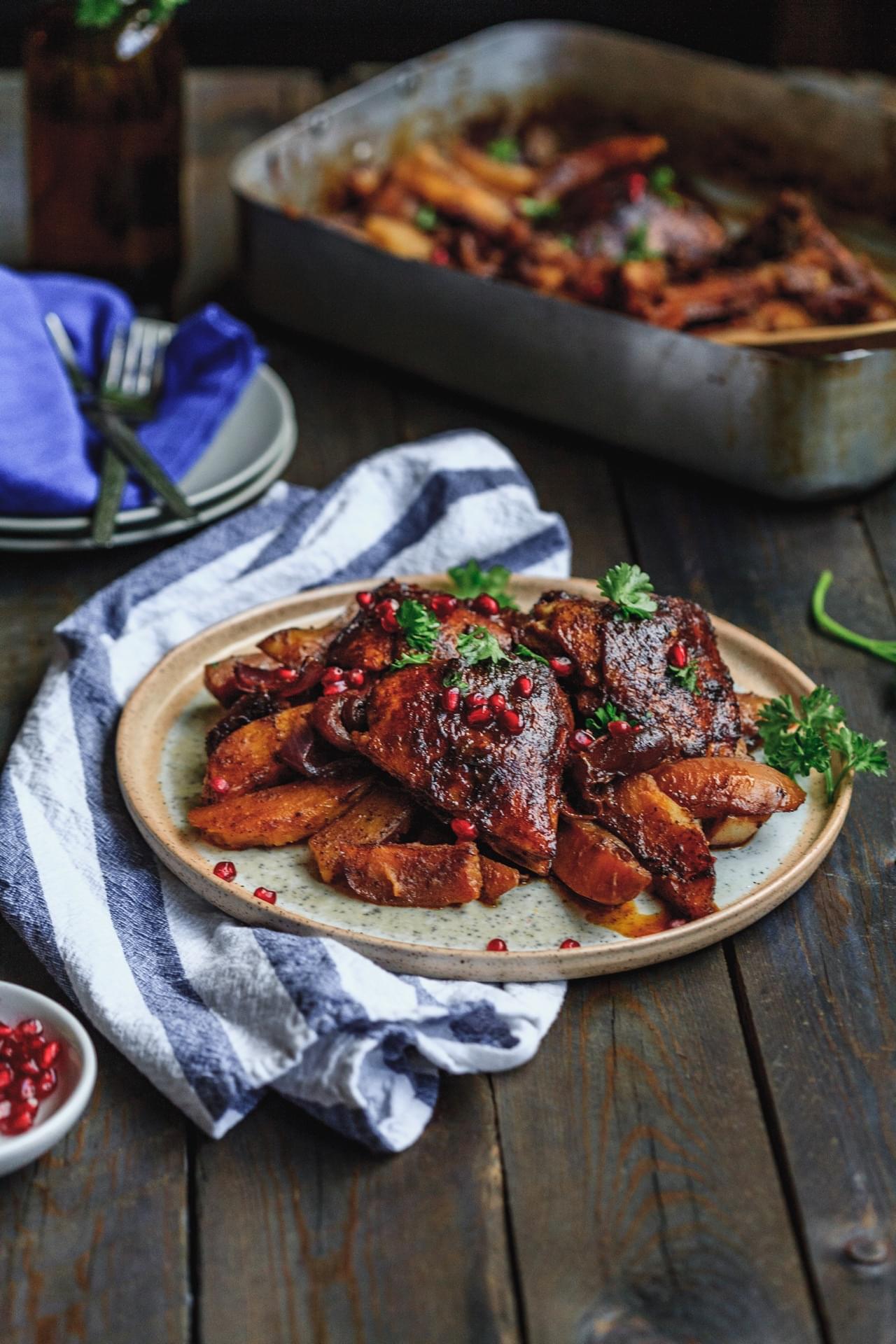