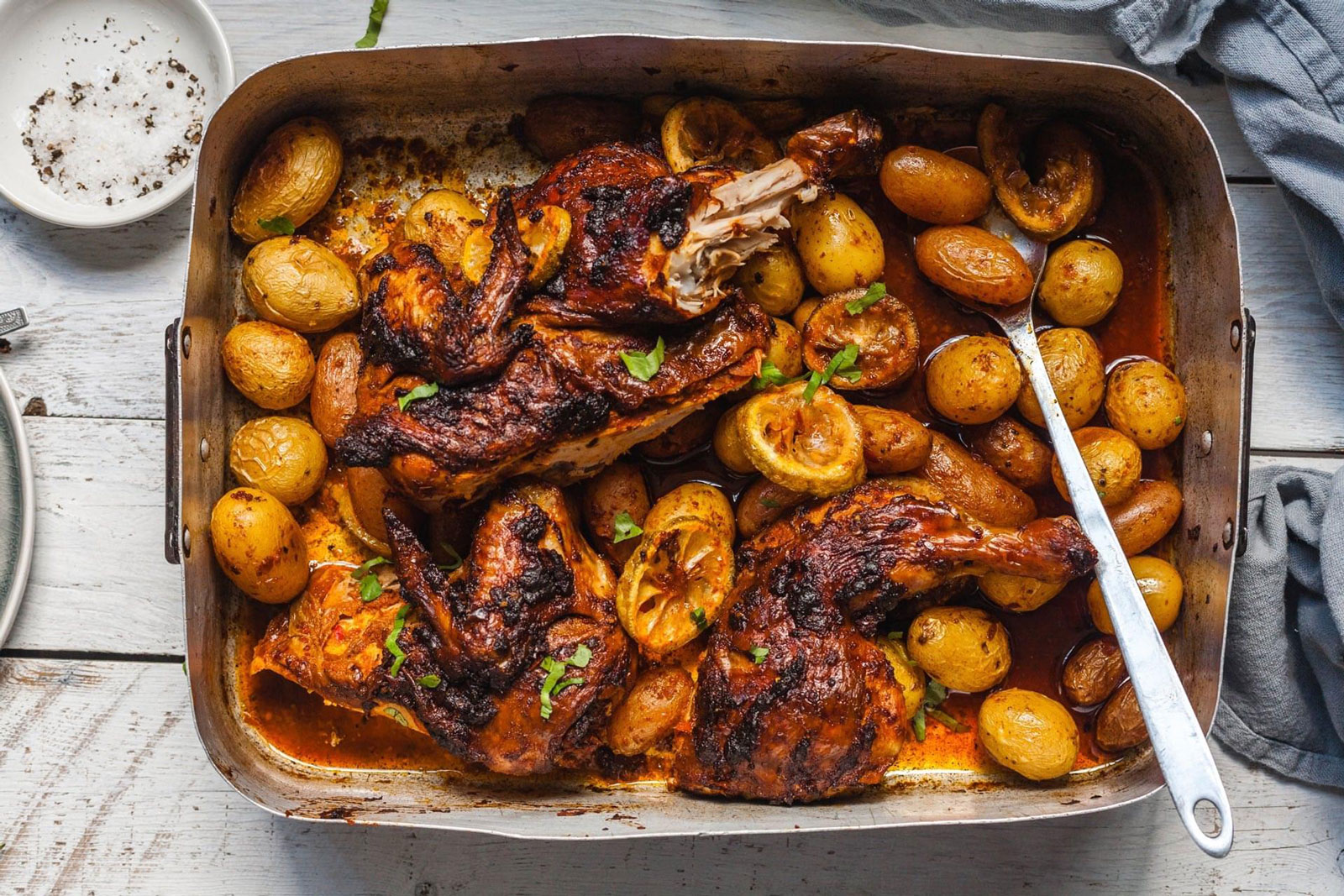 Living in Toronto introduced me to so many different cuisines. I only grew up 45 minutes west of the city and had plenty of great food there too but just not the options and the selection that the big city had and has. I was introduced to Portuguese style Piri Piri chicken by a friend who married a Portuguese guy, and my roommate worked for a Brazilian and often held events at restaurants serving up some of the yummiest Piri Piri in the west. The love affair began. Then I went to Portugal for a port wine tour (next level - I look back and can’t even believe that happened) and experienced it to a whole other level. I also worked with a Portuguese girl and her shower and wedding was very Piri Piri-ful! I also worked in the west and we often had our staff meetings catered by some of those same yummy restaurants serving up Piri Piri chicken. So when I all of a sudden moved and was torn away from it (insert dramatic effect) no pre-mixed store bought powder or sauce would do. 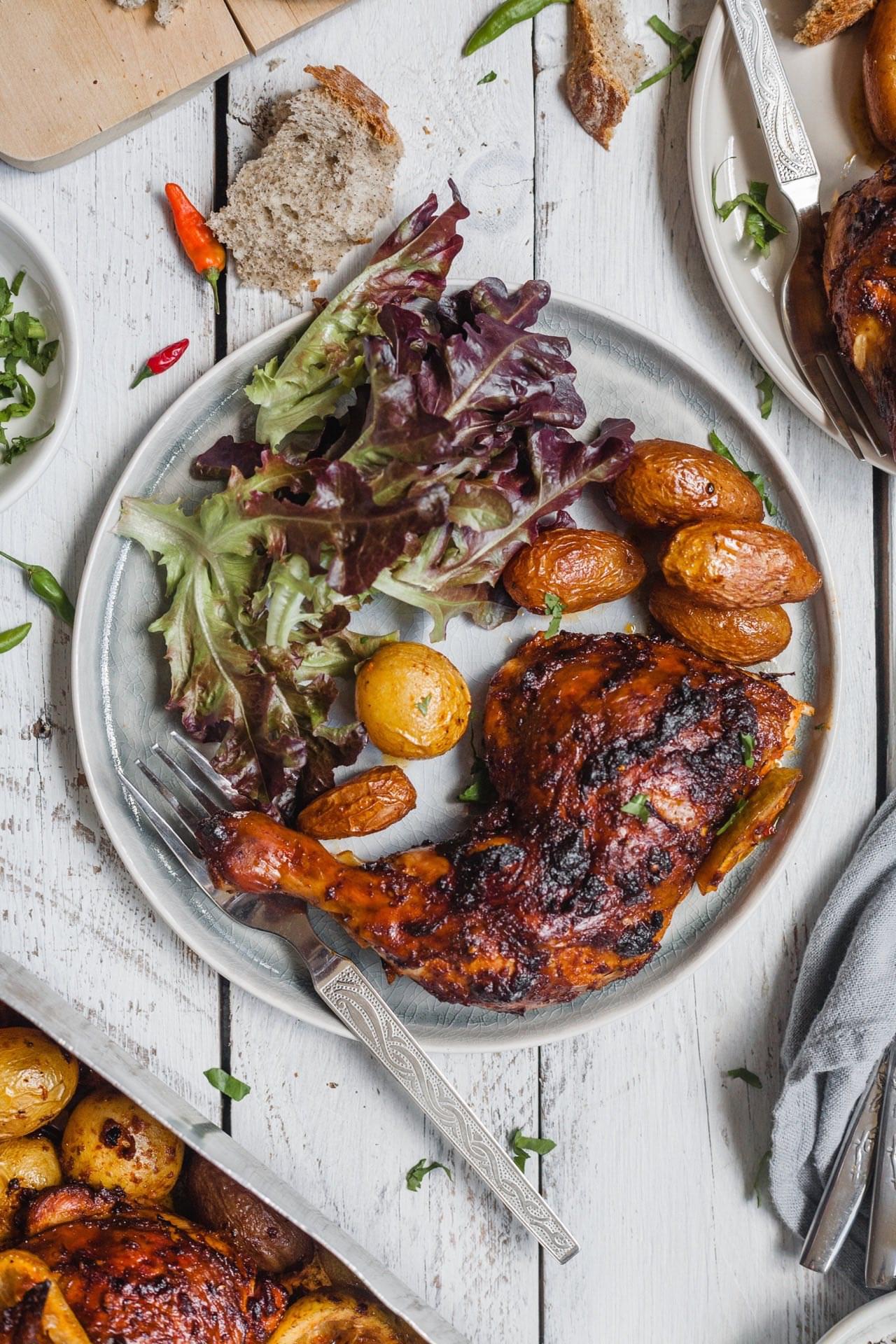 When I saw Deborah’s (rainydaybites) book selection for last month and her picks for our recipe challenges I knew I had to get the book and had to make the recipes for the challenges - one being this chicken. That book is Bringing it home by Gail Simmons. I read the sample of the book online and knew I had to have it. This woman has experienced so many food adventures and has been with Top Chef for years. She is incredible and has used all she has learned whether its flavours techniques and all on these food adventures to make delicious meals approachable and delicious - bringing it home as it were! Definitely a book to have in your arsenal. I’m thankful for it. I am only sharing the two recipes that we did on the challenges a)because they were so darn good and b) I used some substitutions that I like to include for all of us living away from places where you can just pop into any old grocery store and pick up any dried chilies you want. You will have to buy the book for the rest. 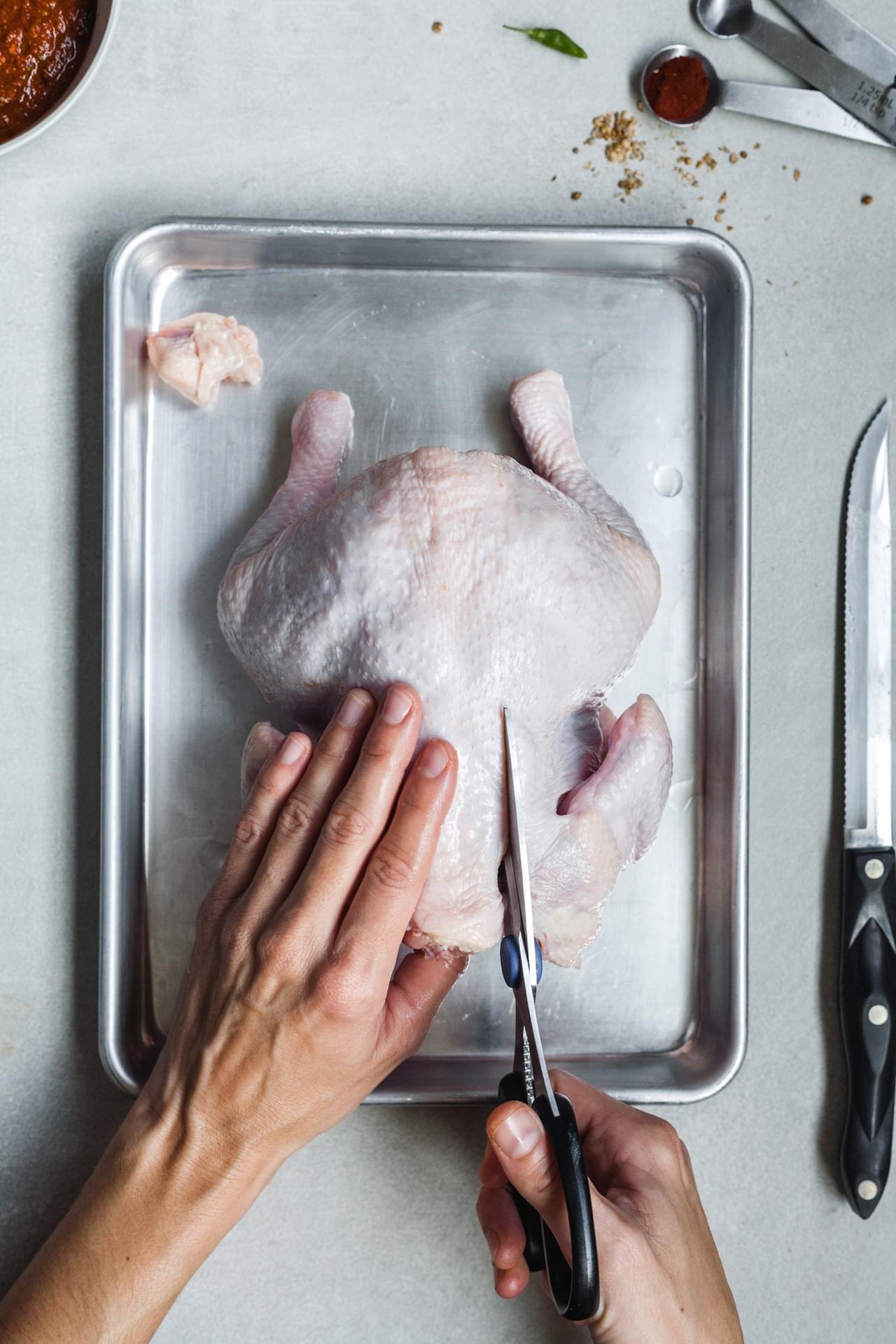 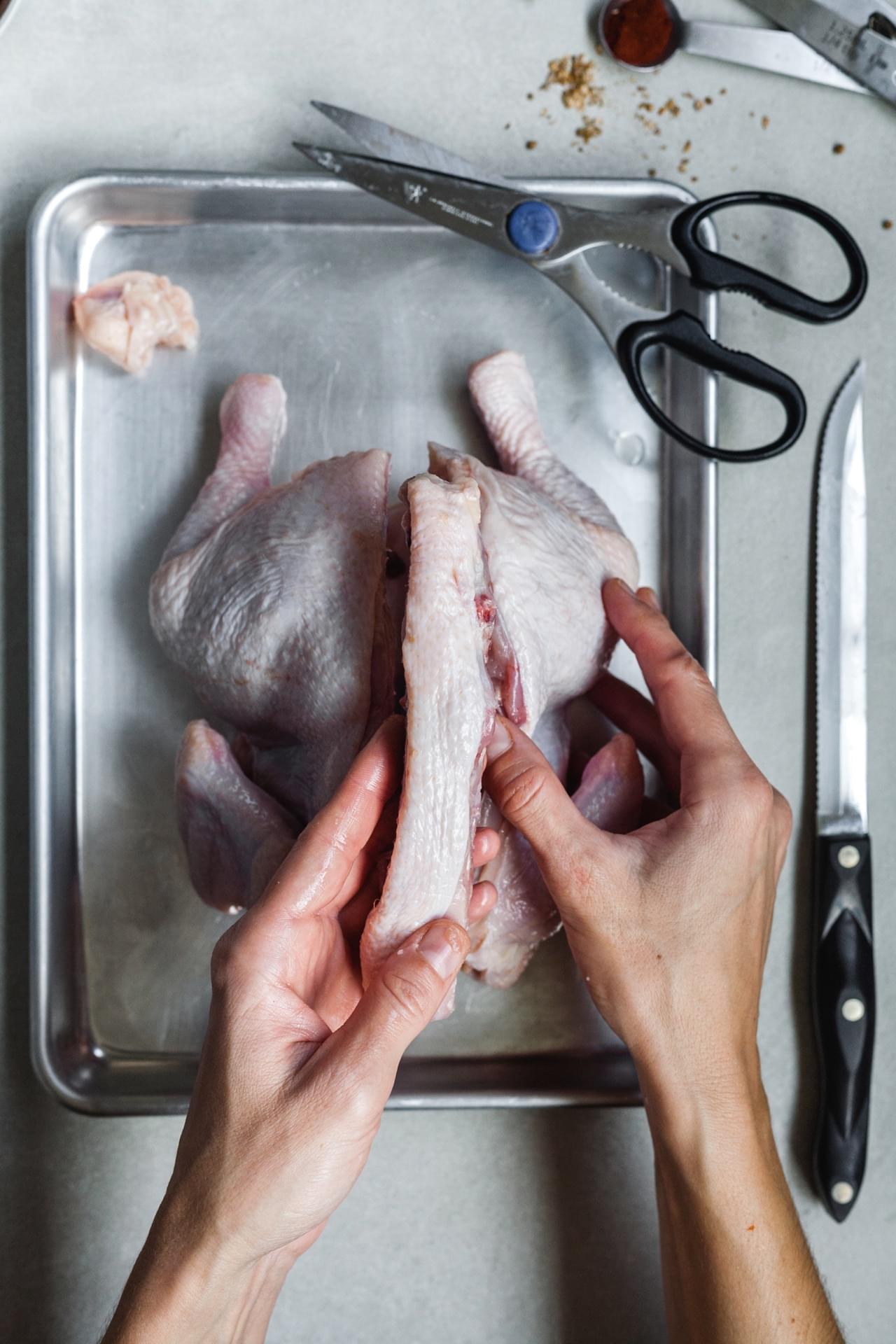 Let’s talk about chicken shall we. I literally hate touching raw chicken. Not just chicken but all meat. Chicken is at the top of my list though. I eat it with no problems but touching and washing - I hate it but I do it anyways. It’s not just the touching meat although that is part of it. It’s my phobia of germs. I’m not as bad as Howie Mandel, but when it comes to poultry I’m a bit of a freak. My skin crawls with every splash that chicken makes when I clean it and I memorize anything it’s touched or was In contact with it and must disinfect everything in its vicinity. Now you know the love hate relationship I have with chicken. Anyways, this was my first time spatchcocking a chicken and as much as I hated touching it up this much, I recommend it highly. Not only does it cook faster but it’s a lot easier to cut later when it’s cooked as well. Hope the pictures help with the process of it! 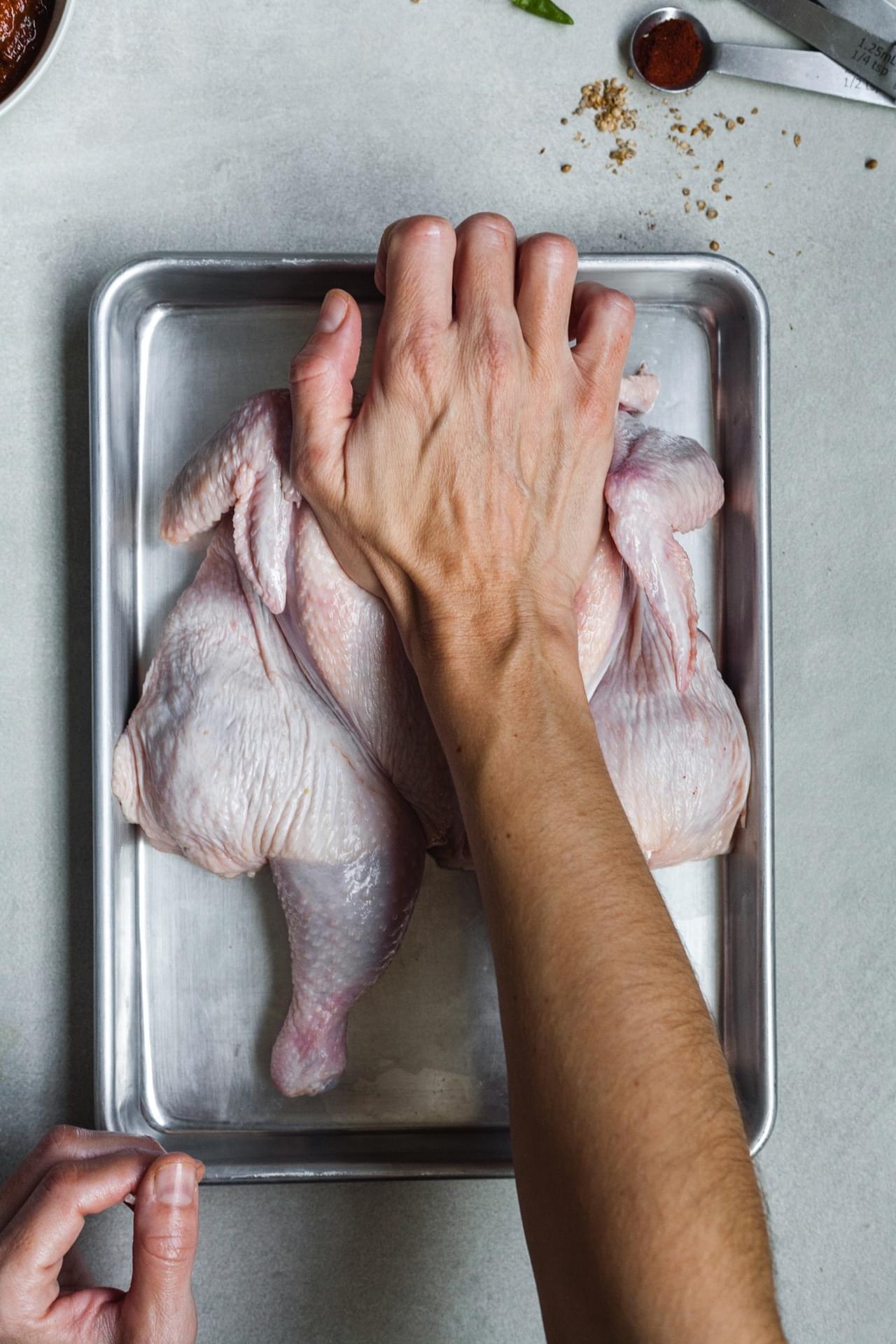 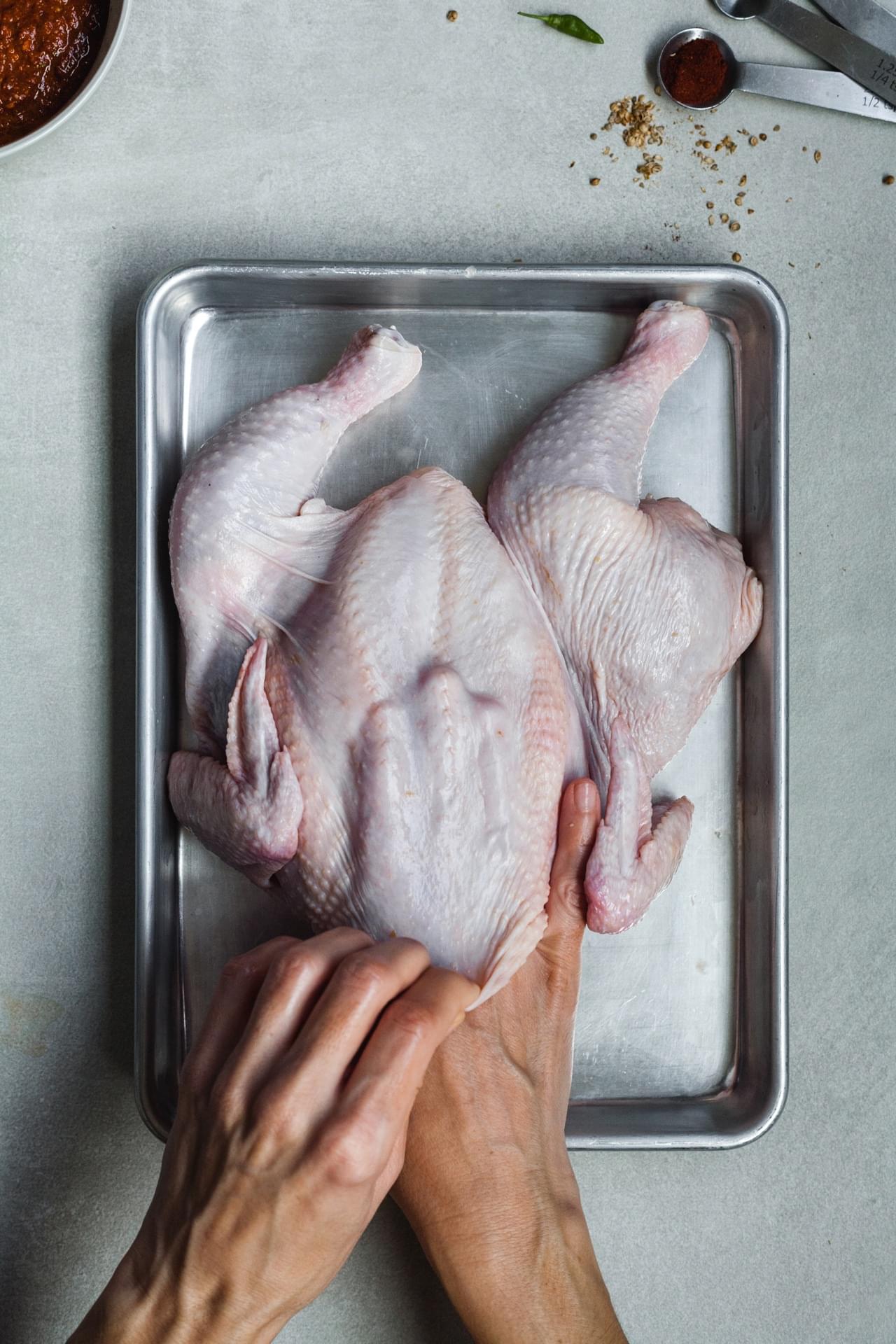 Finding the chilies was a bit of a challenge but I just did a little research on substitutions and used what was available. I found New Mexico dried chilies and they were quite affordable surprisingly for here. Ironically this week I went into the same store to see if I can get some saffron threads and saw they had brought in some anchos. Figures! I also used some locally grown tiny bird peppers for some extra flavour and used a jalapeño to substitute for a Serrano. All worked very well and the flavour outcome was incredible. The paste created with the chilies and the rest of the seasoning ingredients really seeps into the bird and makes it so flavourful. The peppers are not overly hot at all. They just add a very subtle heat but tremendous smokiness. If you want more heat don’t remove the seeds from the fresh chilies. 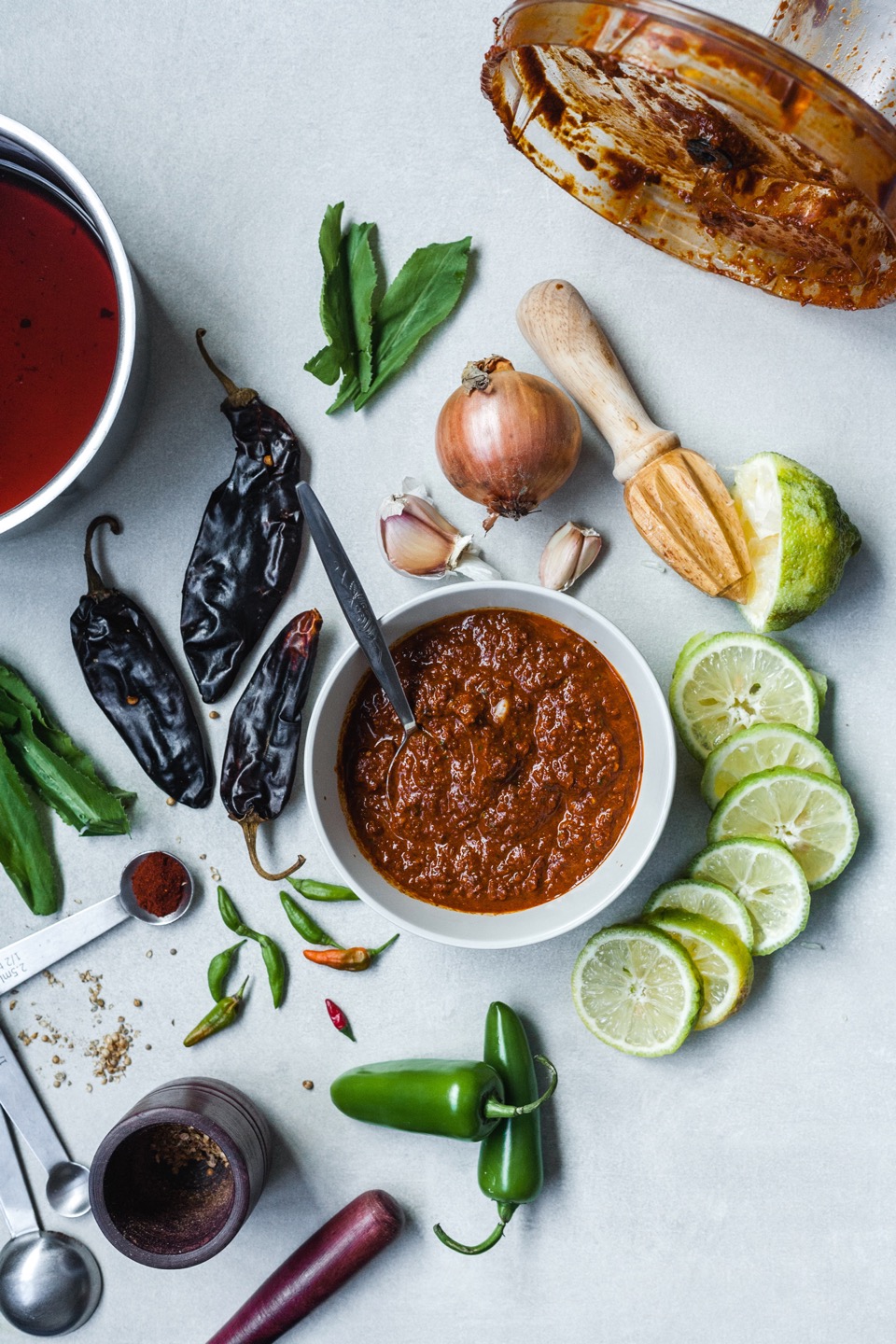 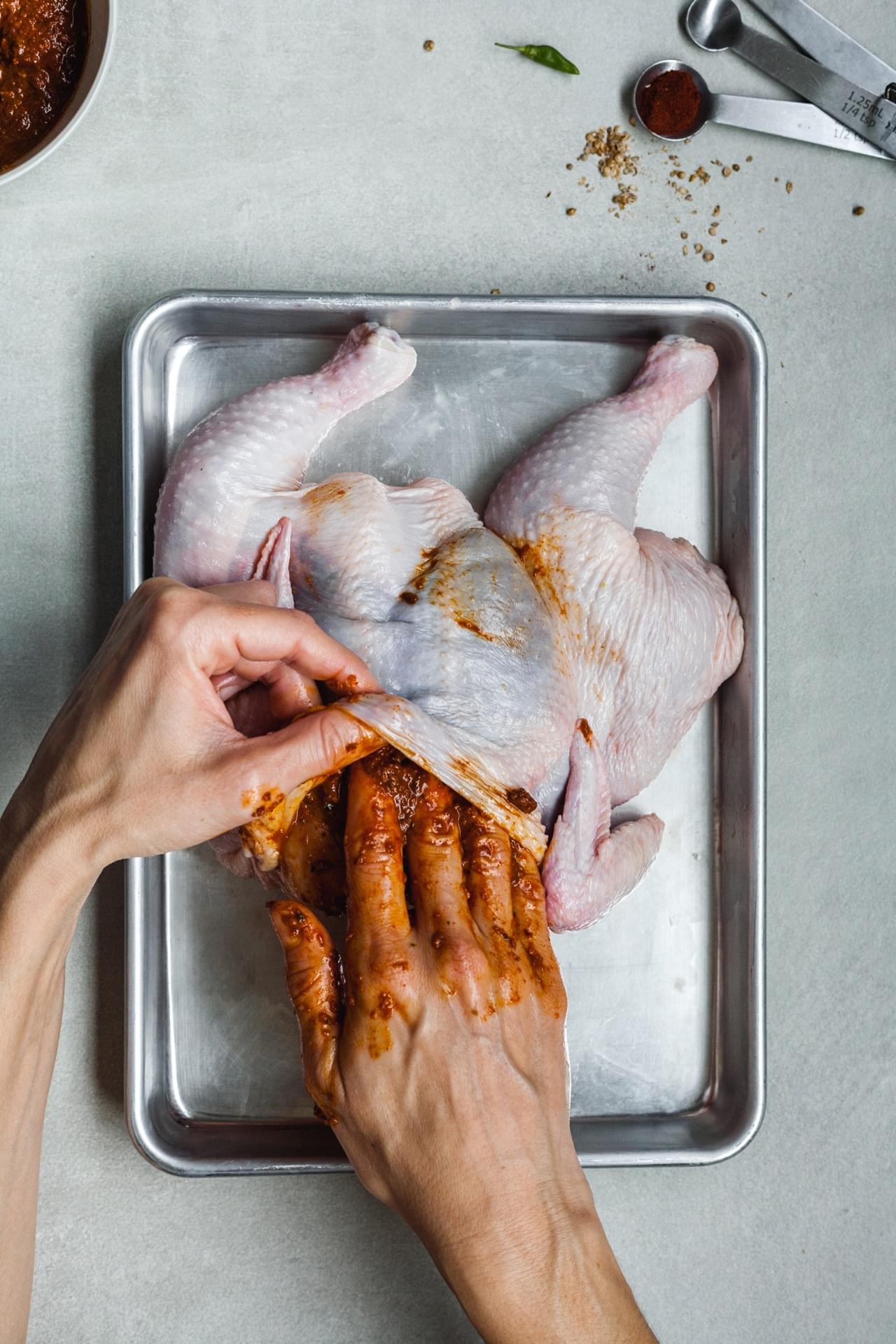 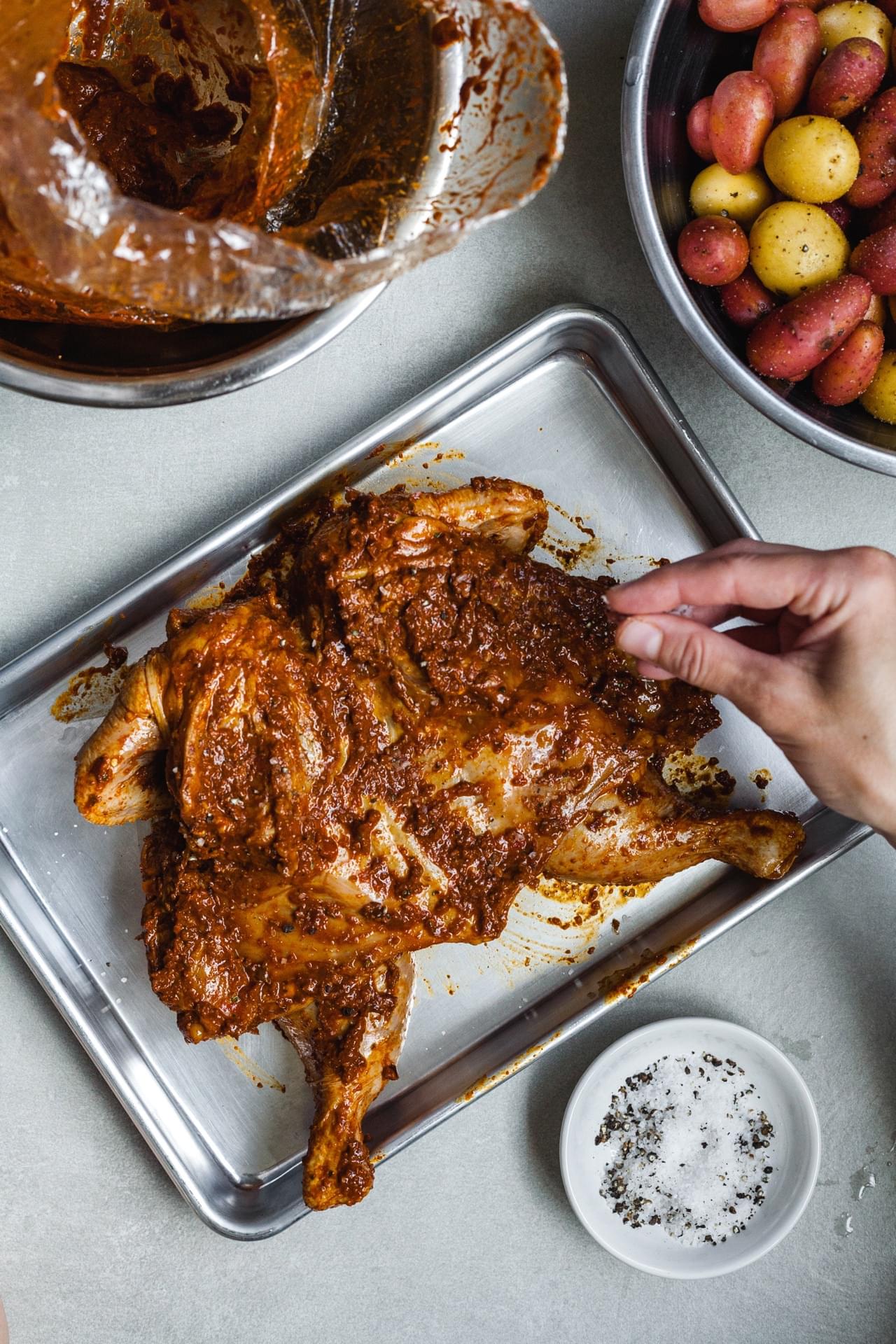 I just can’t talk this recipe up enough. You just need to try it! Hope the substitutions help. My recipe below is what I used in substitution for the original recipe in brackets. So please use whichever you find more conveniently. You won’t regret making this recipe. The potatoes are flavoured from the juices from the chicken and are perfectly cooked. The lemons give it just the right amount of zing and acidity. Just an awesome recipe which is great for family dinner or for entertaining. Hope you try it and enjoy it!! 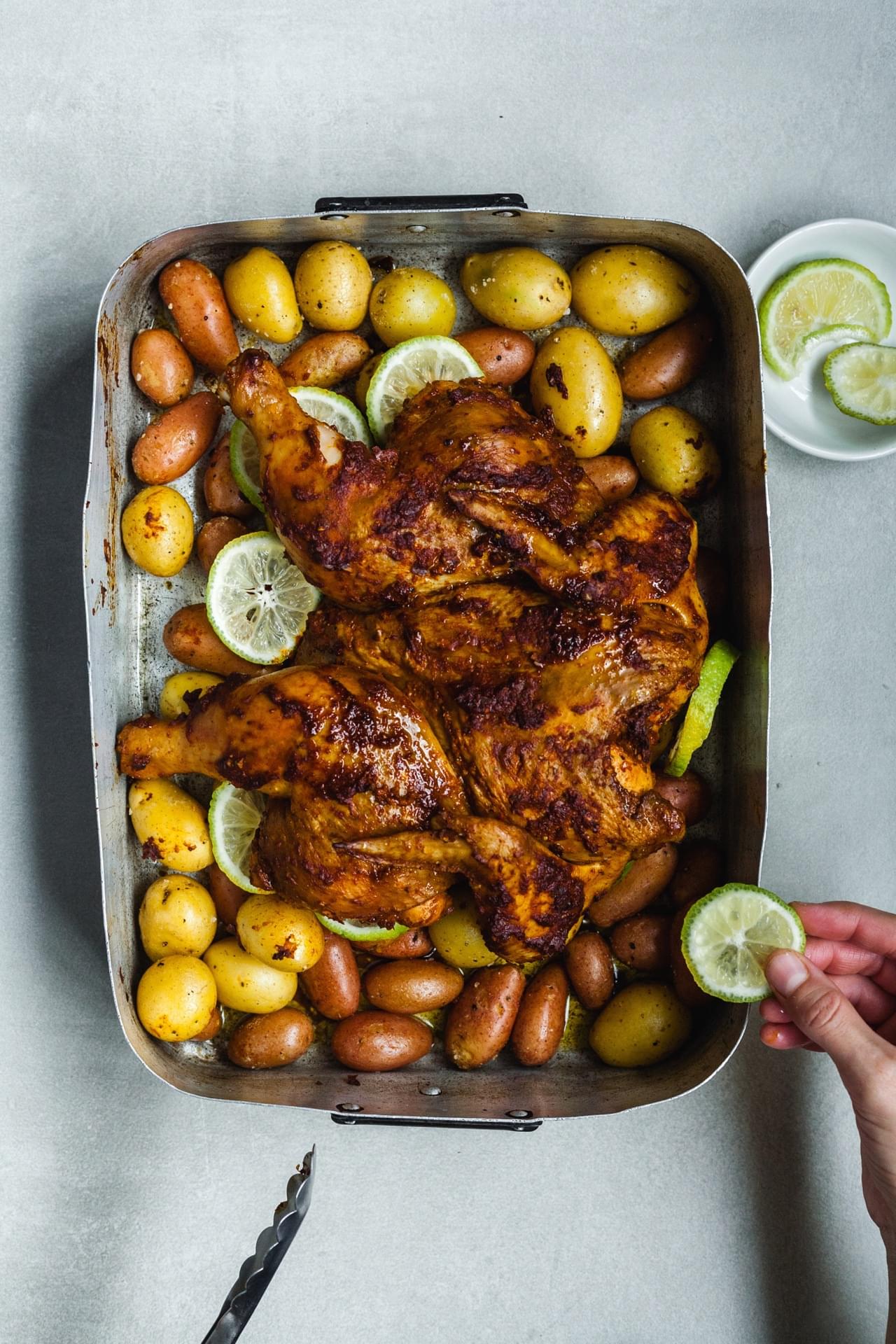 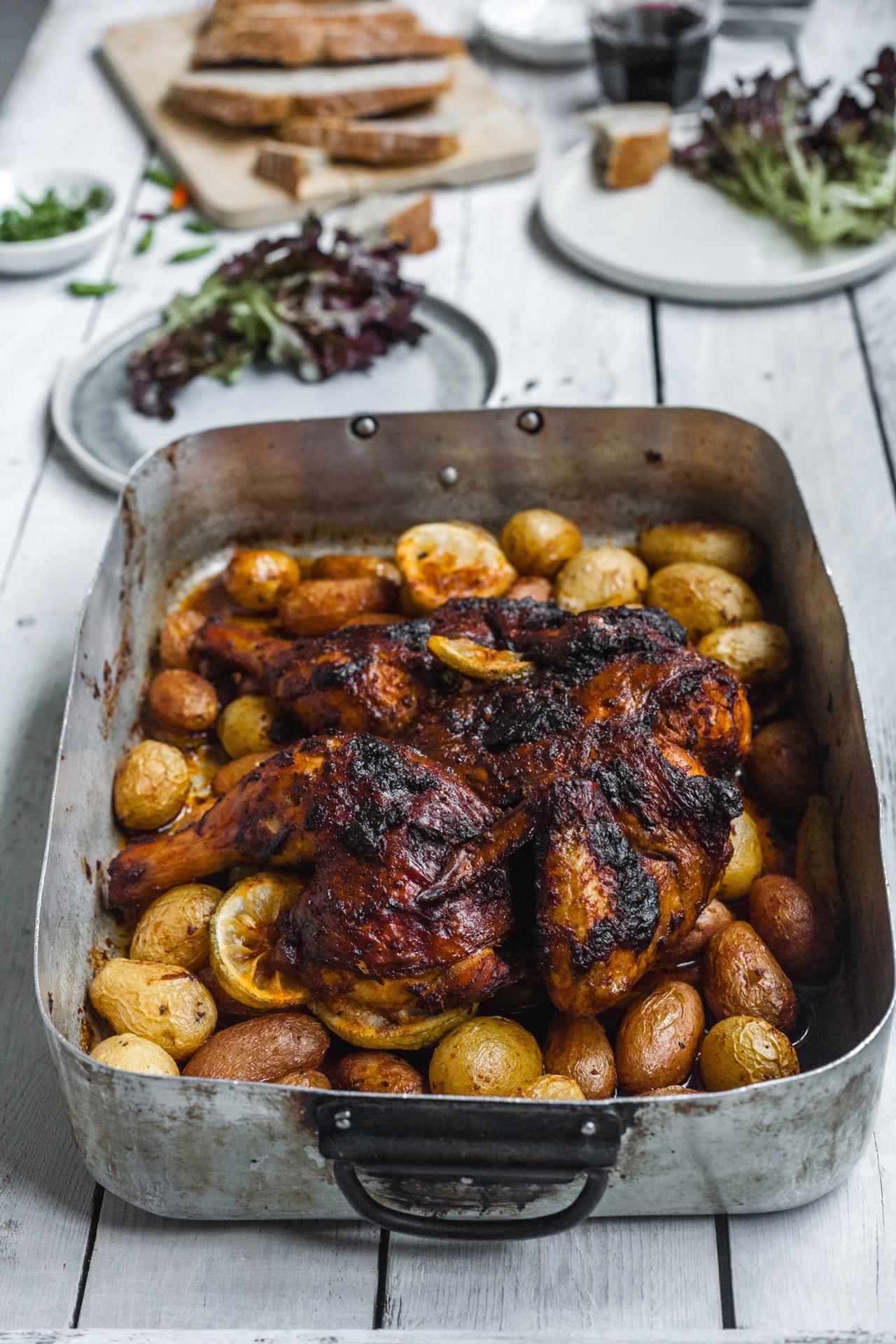