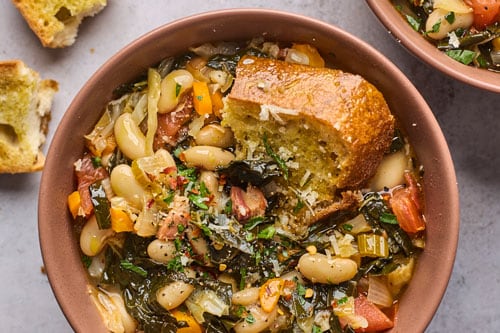 This Hearty easy to make Tuscan Ribollita soup is full of veggies, greens and white beans and is all I crave in the winter. I like to make mine with crusty bread on the side (hubby’s choice) but traditionally this Italian soup is made with stale day old bread soaked into the fabulous broth for a super filling and wonderful rich thick stew-like soup (stewp) that is best made a day ahead for the flavours to really develop. The perfect make ahead soup that is fabulous either way - bread in or on the side I have both versions available in this easy and delicious recipe. 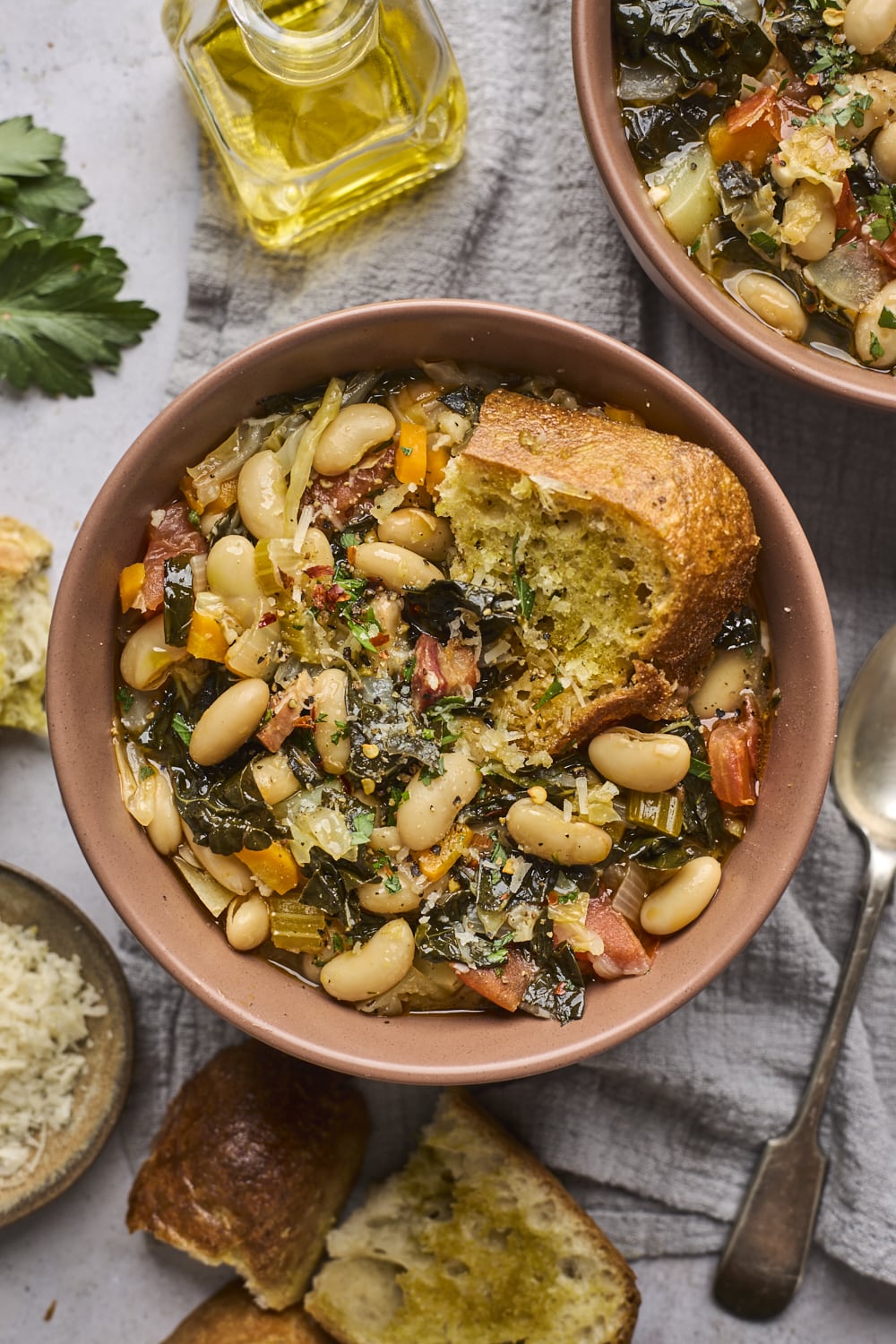 Ribollita is an Italian soup that hales from Tuscany - it’s hearty and delicious and loaded with veggies (lacinato kale, savoy cabbage and white beans are a must) and traditionally made with day old or dried stale bread. It’s often called tuscan bread soup. Although there might be tomatoes in some recipes it’s not a tomato based soup like minestrone nor is there past Ian this soup. Ribillita means ‘reboiled’ and this is so appropriate as the soup is often made a day ahead with the stale bread in it and then reheated the next day so that all the flavors meld and have a chance to really get to know each other and the bread sort of falls apart and melts and becomes part of the soup itself. This is a hard sell for my hubby as the texture (soggy bread) is not his thing and many feel the same way about the whole bread in the soup - not me - I grew up eating food like this so I love it but I made the recipe without the stale bread in it so its the soup portion alone but feel free to add the stale bread in it or serve it with crusty bread on the side or I like to place the stale or crust bread in the bowl first and ladle the soup over it that way I still get some of the harder bits of the bread in the soup - (note that that is totally not traditional just a preference ). More details included on the bread version below and recipe itself 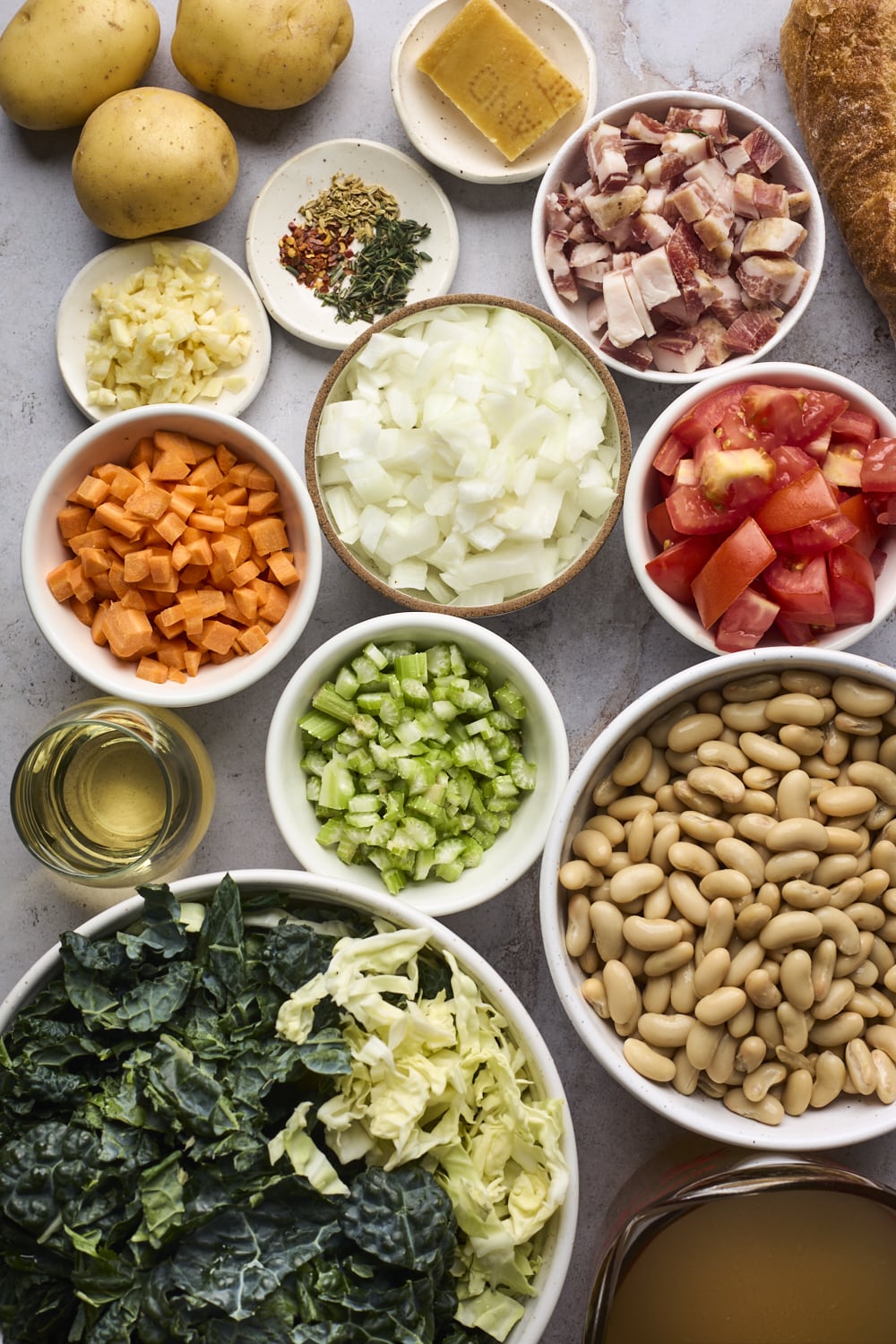 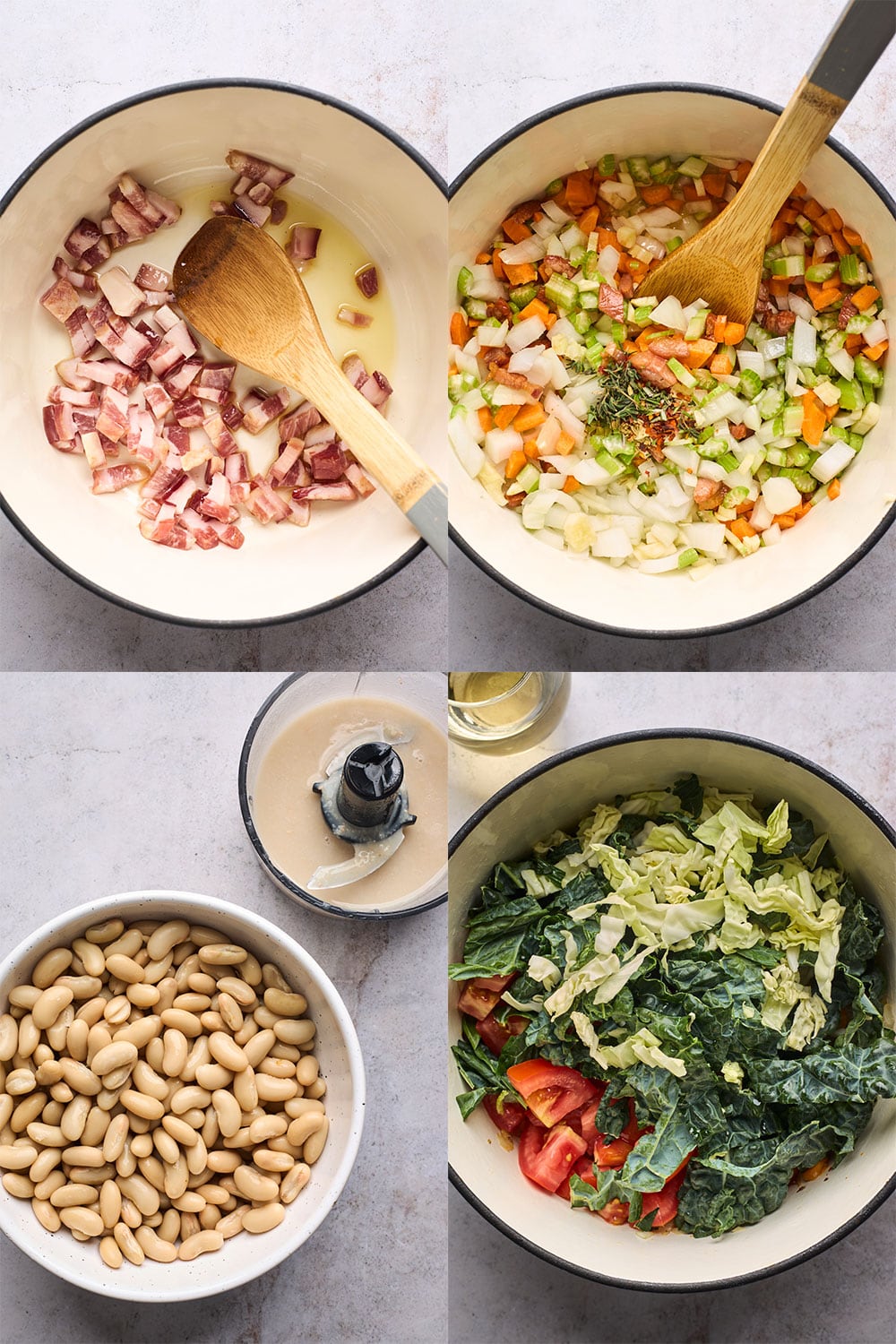 How to Make This Easy Ribollita Soup:

For the Bread Version:

Traditionally, Ribollita is layered with the stale bread in a large pot that it can be reheated in later. Spoon in 2-3 ladles of soup into the vessel. Top with a layer of dried bread. Continue to alternate layering soup and bread until you use all of the ingredients.(or you can cube the stale bread and stir it in the soup pot) Cover. Allow it to come to room temperature for at least 2 hours then refrigerate for up to 24 hours to give the bread time to soak up the broth. Then ‘reboil’ Ribollita - Add additional broth to the pot to create desired consistency. Reheat until warmed through then serve.

How to serve this Italian soup

Traditionally ribollita is made with stale bread that sort of melts and becomes part of the soup - like a thick rich veggie soup. When I make it the traditional way I usually just serve it with a drizzle of olive oil and some grated parmesan cheese but if I’m making it without the stale bread in it I will serve this hearty soup with crusty bread, cheesy crispy warm garlic bread or grilled or toasted bread on the side to dip into that lovely flavourful broth. 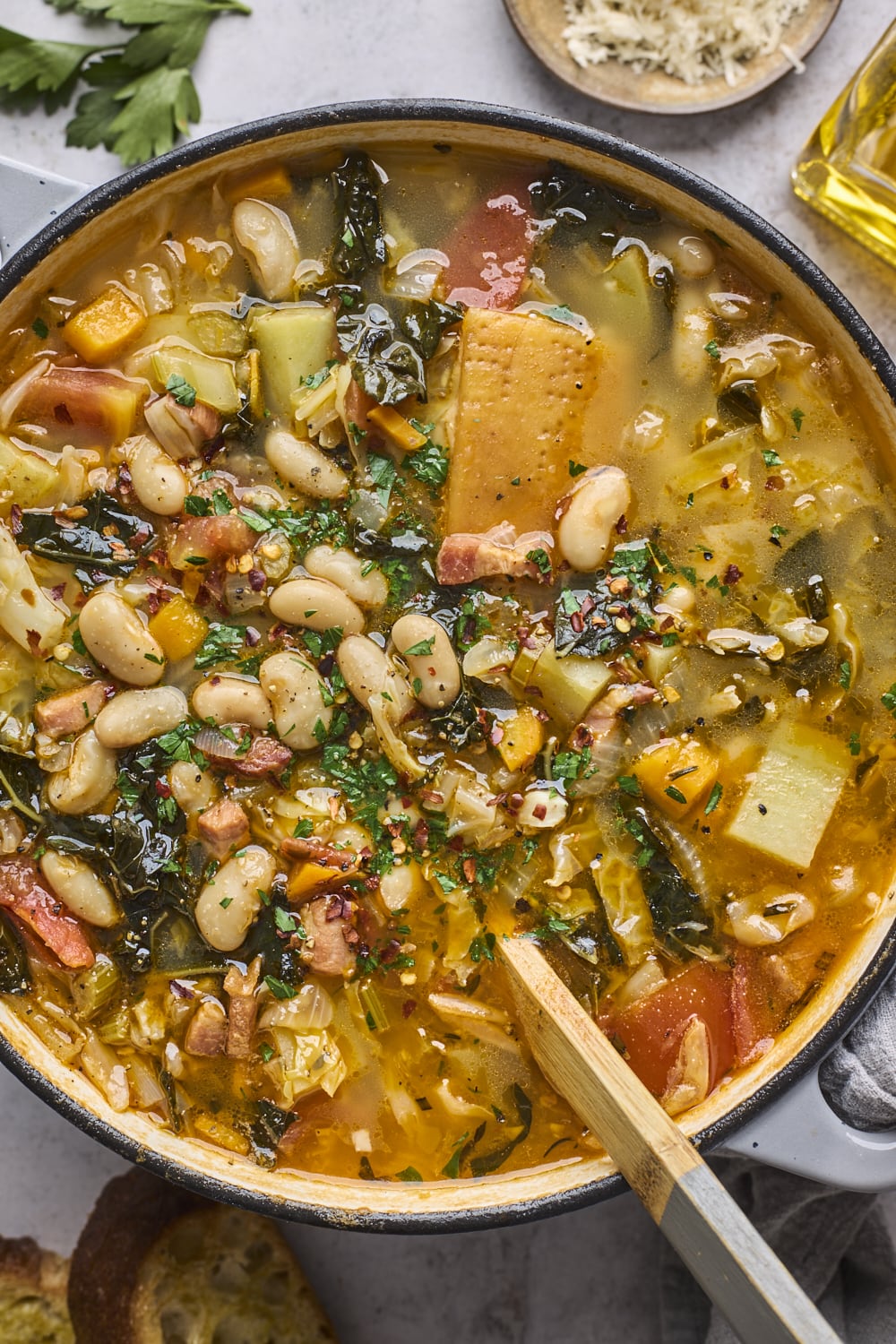 Make Ahead & Storage and Freezing 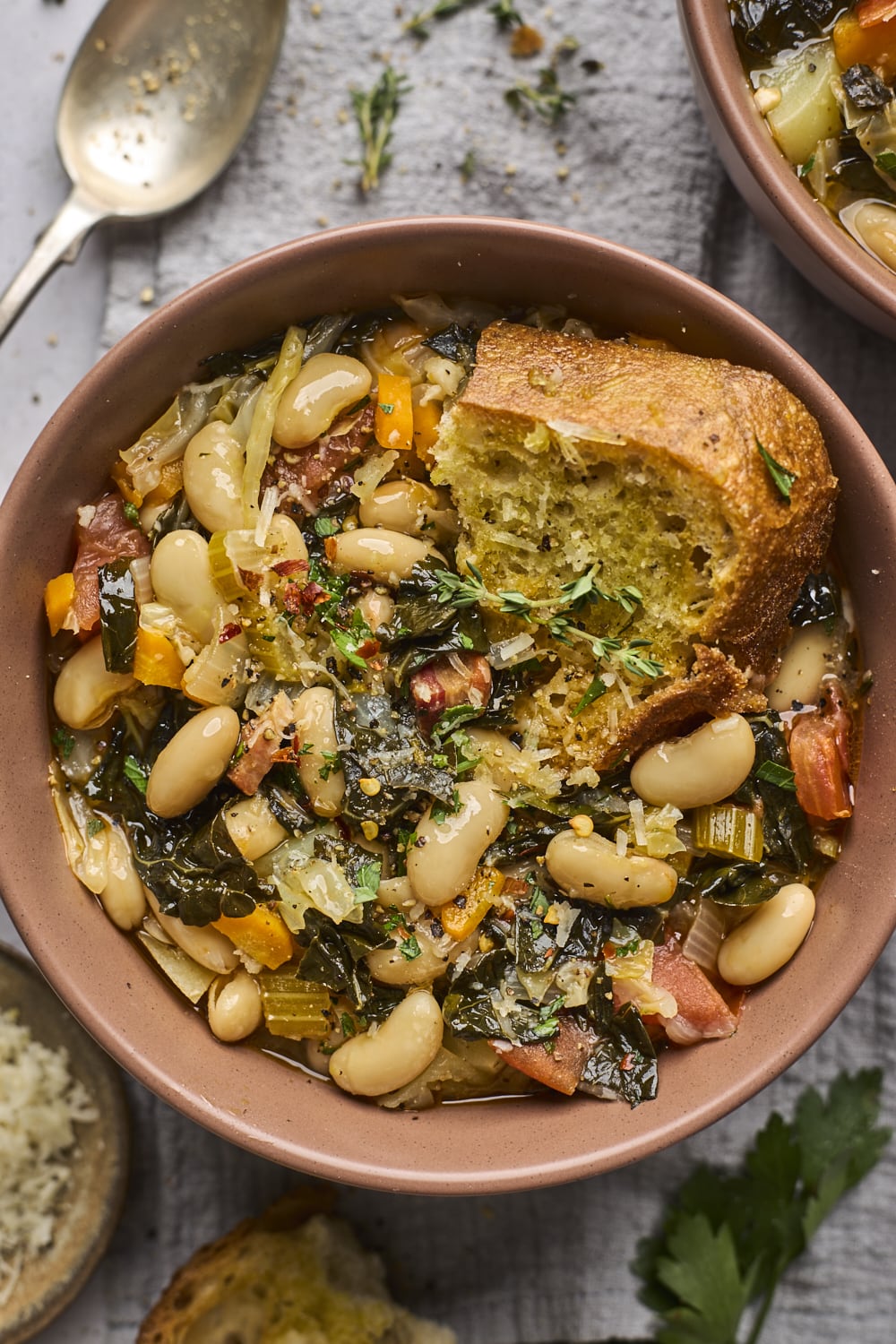 For Serving (all optional) 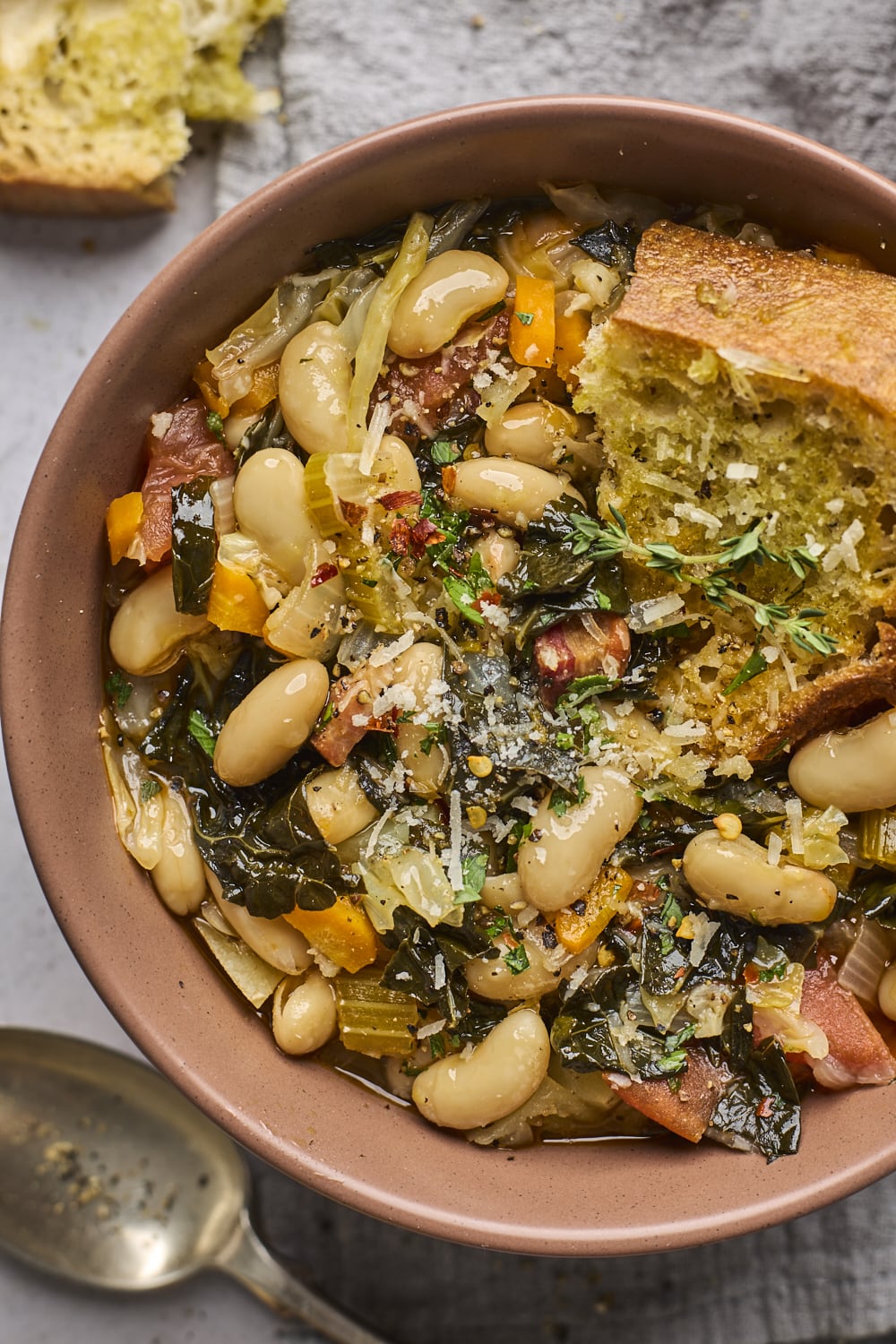