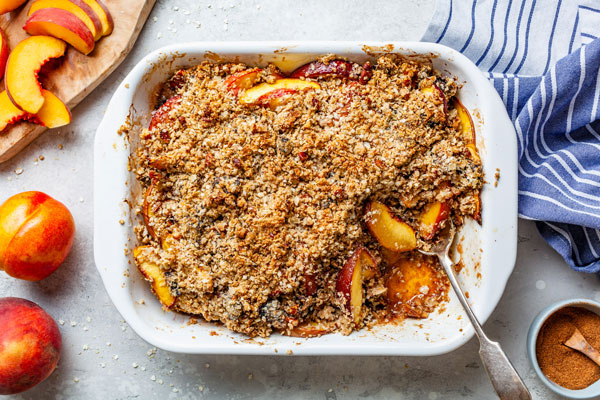 Peach and nectarine season cannot pass me by without making my very favourite thing to make with any fruit - crumbles, crisps and cobblers, easier than pie and thrown together in minutes. With little effort you are left with deliciously sweet and tender peaches and nectarines under a blanket of crunchy pecan crumble. 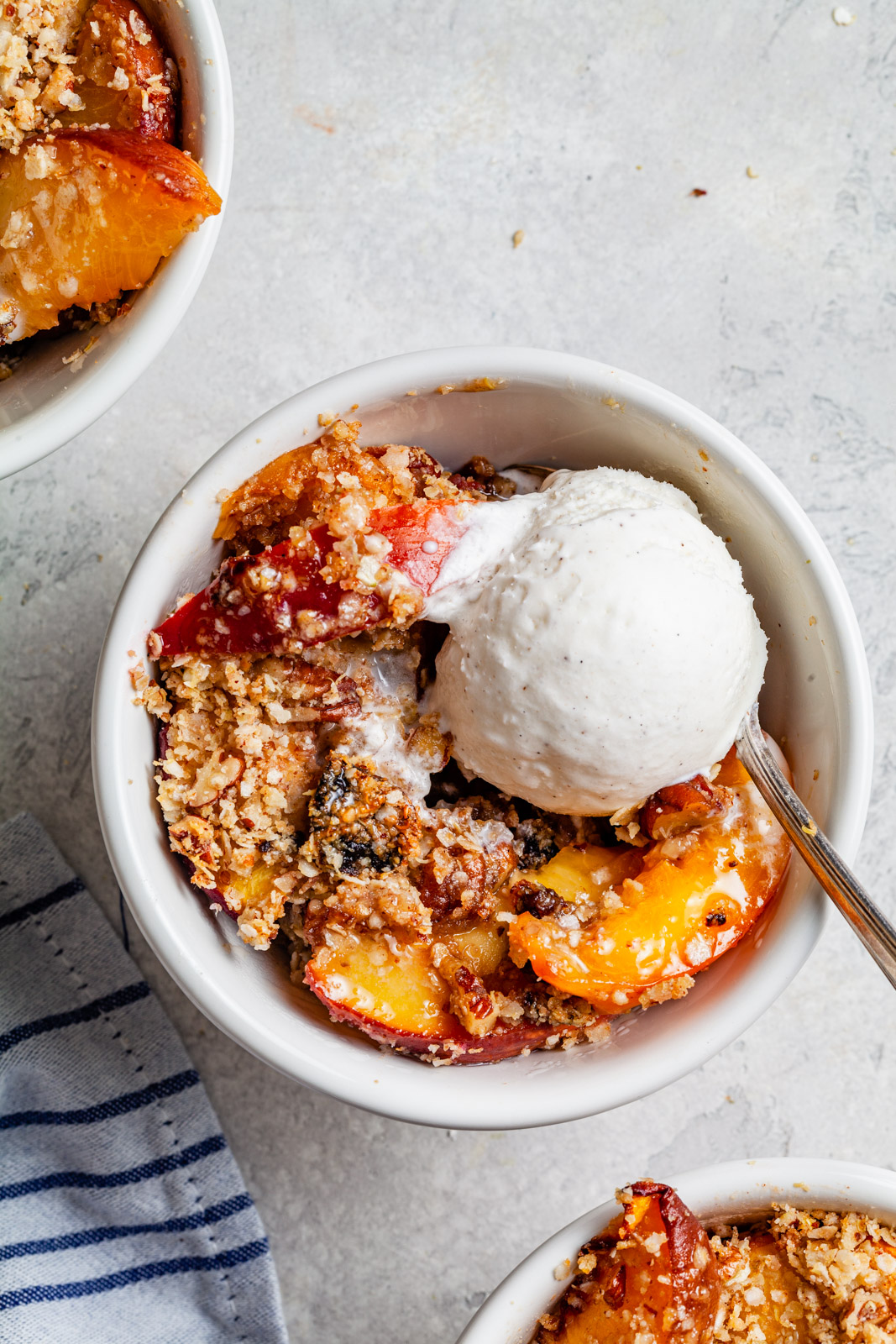 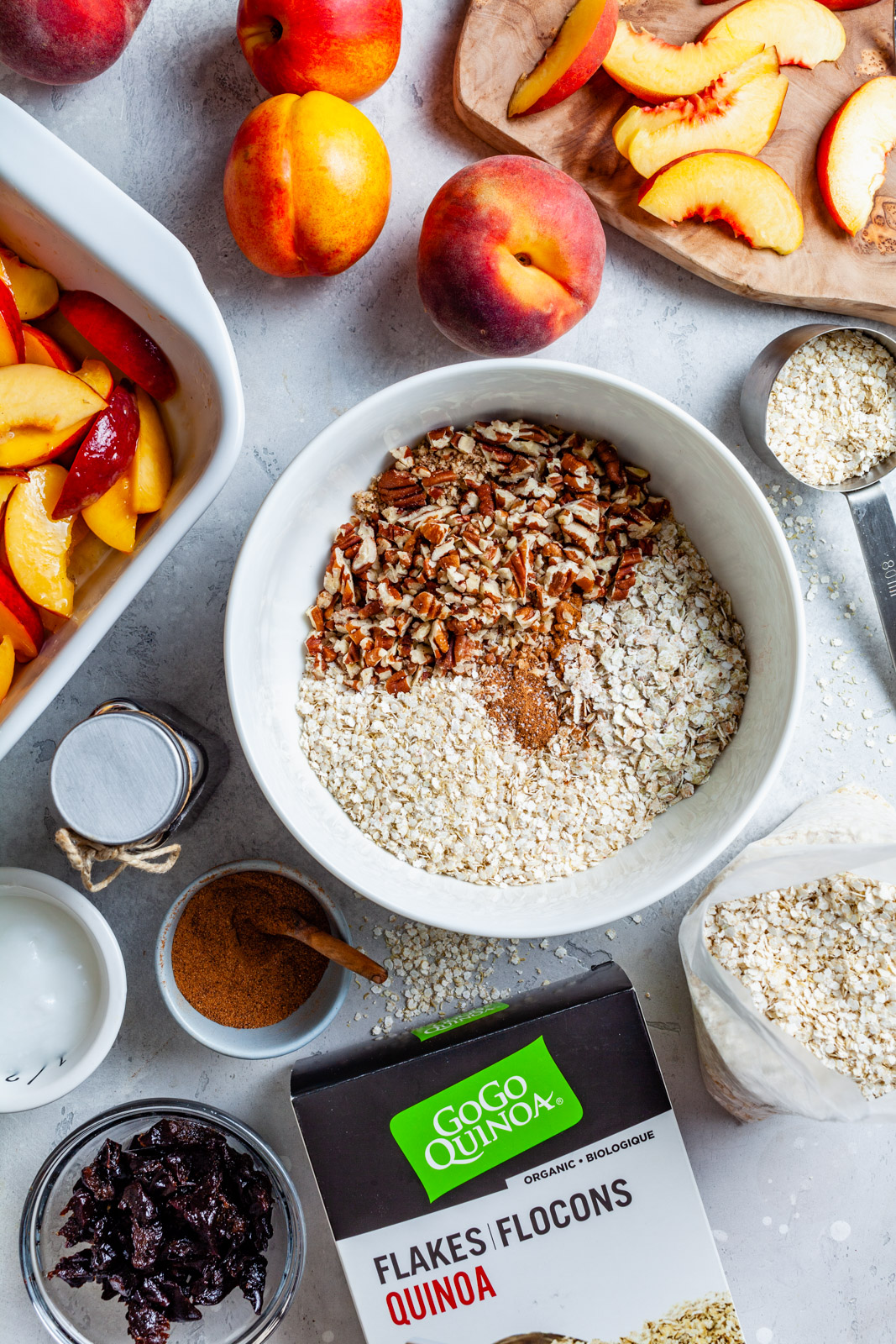 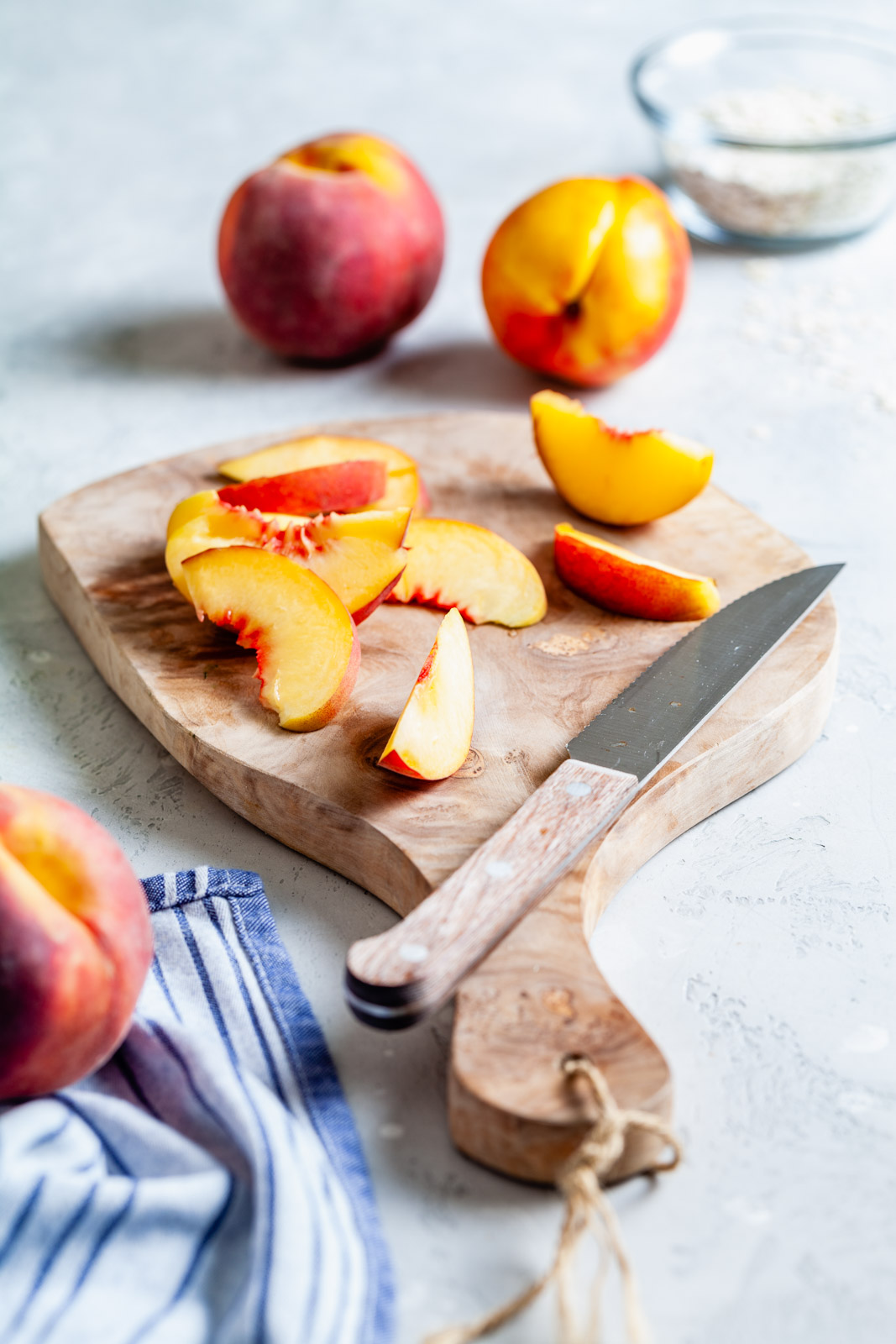 This is a riff on a recipe by Smitten Kitchen. I love all of her recipes and her crisp and crumble recipes are just the way I like them. They are not overly sweet which I love because the fruit is usually sweet enough and we want the star of the crisp or crumble to be the fruit not the sugar. Speaking of sugar - this crumble actually has none. It’s naturally sweetened with either honey or maple syrup depending on whether you want it to be vegan or not. Extra sweetness and texture is added to the crumble topping via the chopped dates in it. You read that right - there are dates in the topping and you will just have to trust me on that. I got inspired to add them to my crumble from a recipe by Green Kitchen Stories. They do what sugar and butter do (take that butter and sugar! - they do have their place just not in this recipe). They sweeten the topping plus when rubbed together with the dry ingredients of the topping, help clump or bind pieces together so the topping is part crumble part sandy. 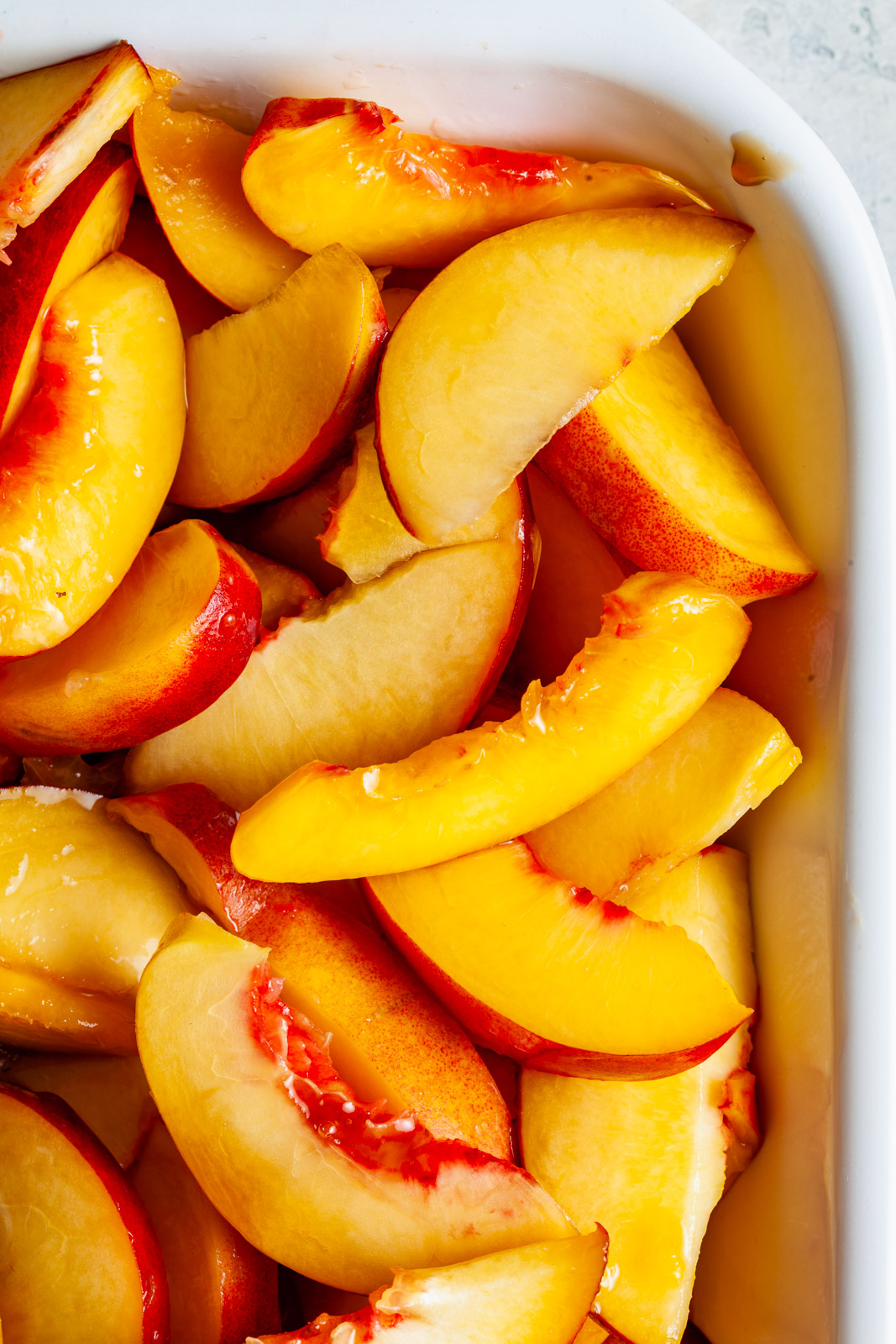 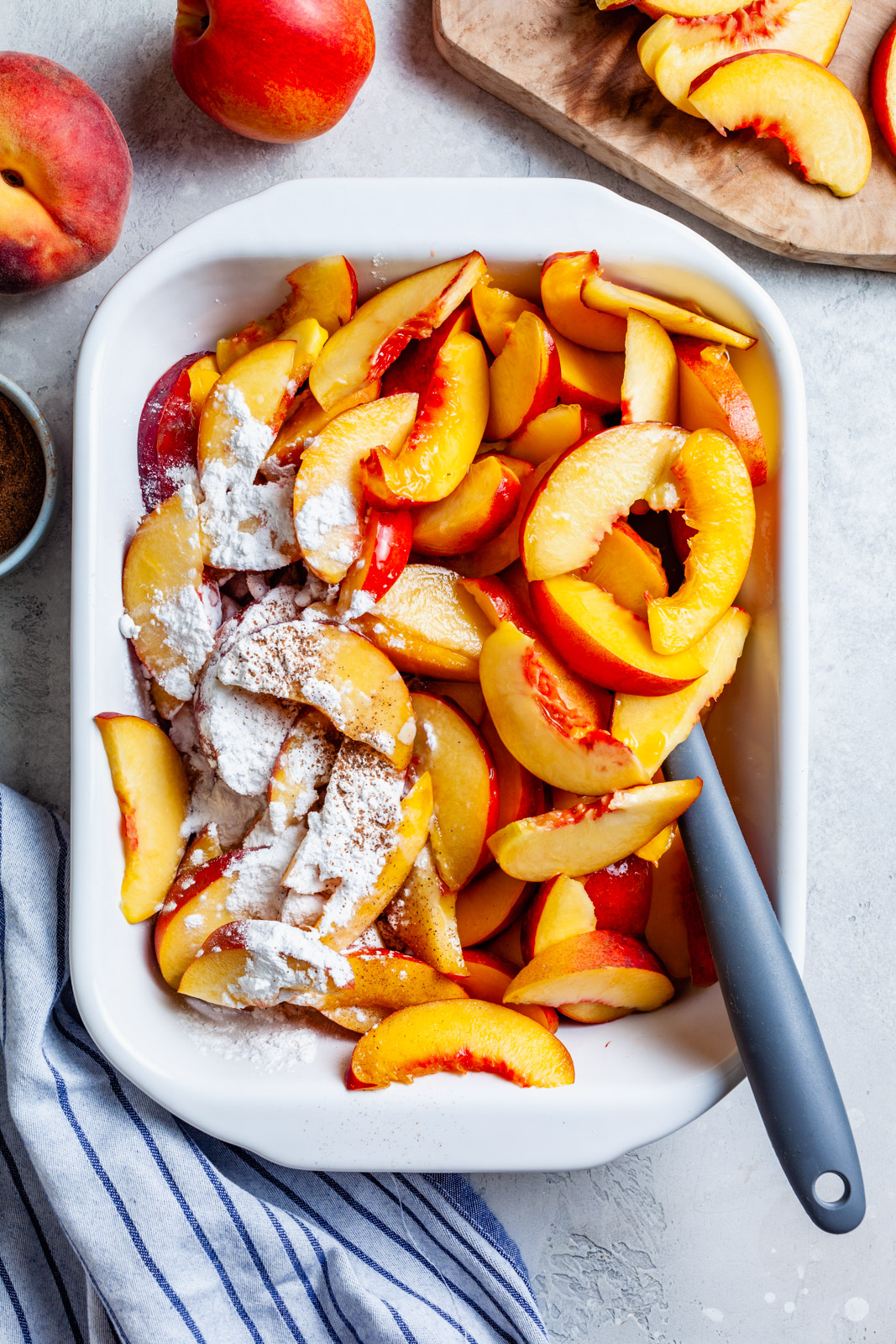 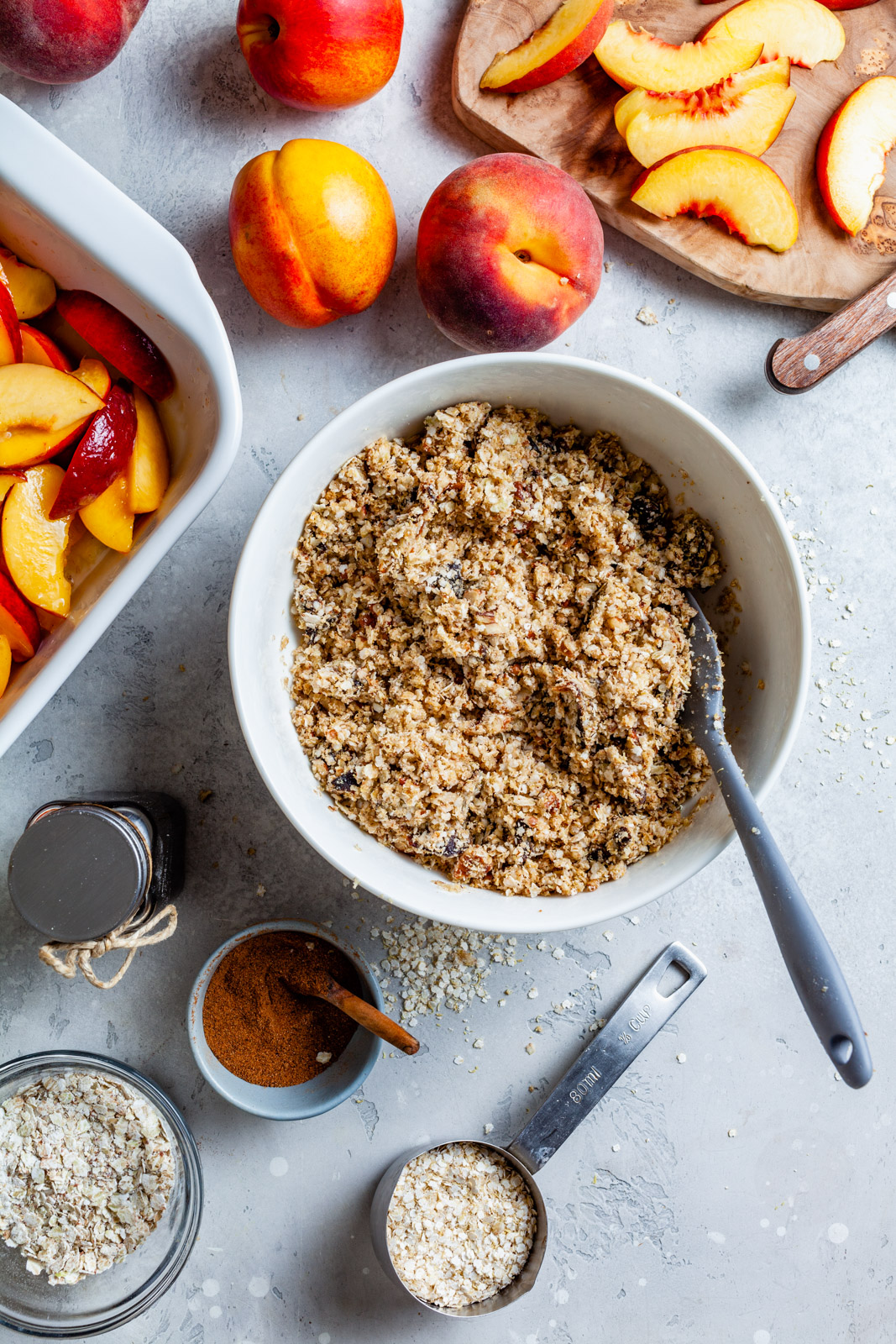 Let’s talk more about that topping. I partnered up with GoGo Quinoa for this recipe and decided I would use a blend of their Buckwheat flakes and Quinoa flakes to make it. Their flakes are quite fine in texture and I love making porridge out of them and thought the blend would make the perfect texture for this sandy topping. Another feature that makes this topping absolutely delicious is the pecans, which must be lightly toasted to emphasize the pecan flavour. I also process most of them so that they are very fine and flour-like, infusing the whole topping with that beautiful nutty flavour. The rest of the pecans get a rough chop and add a little crunch to the topping too. 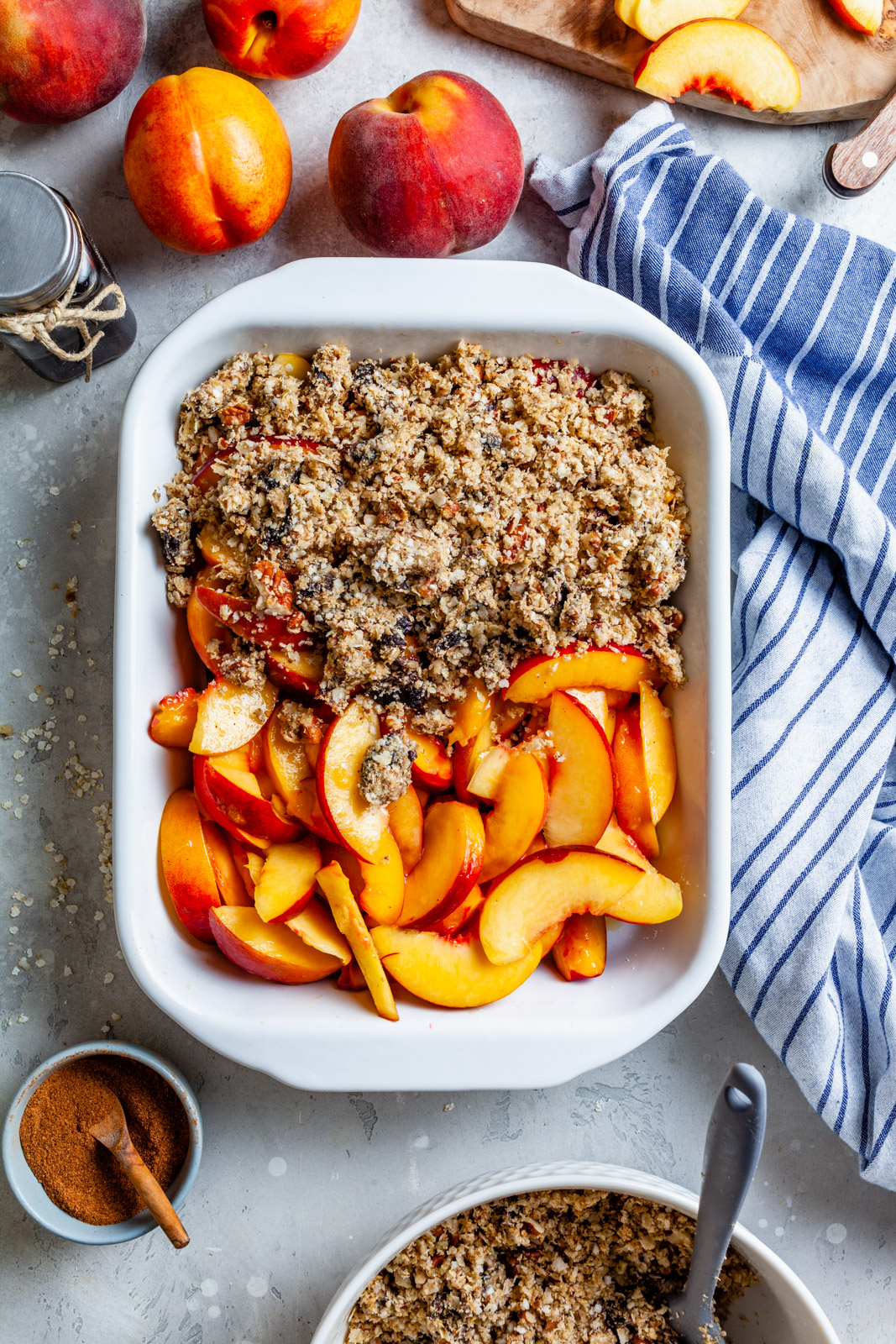 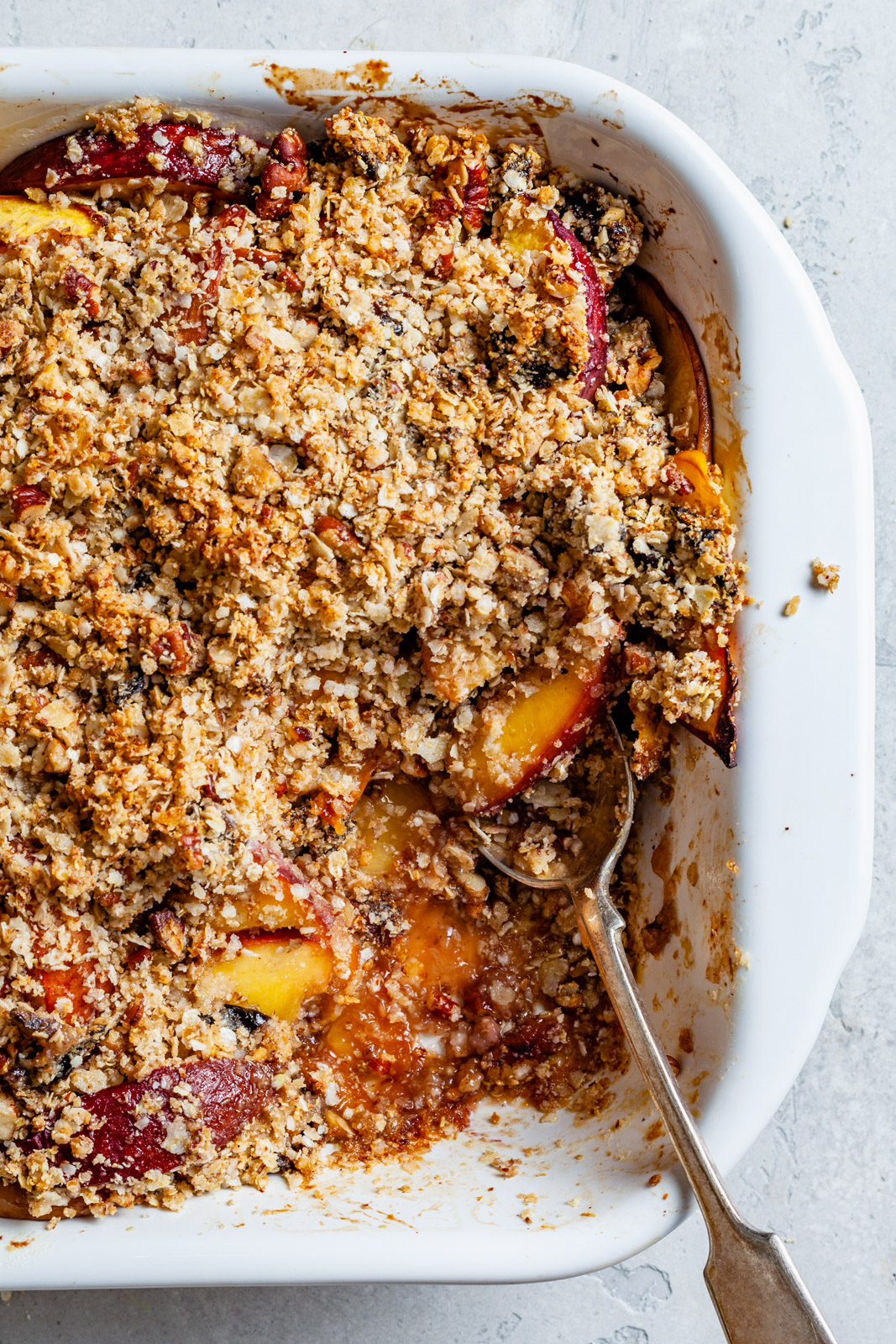 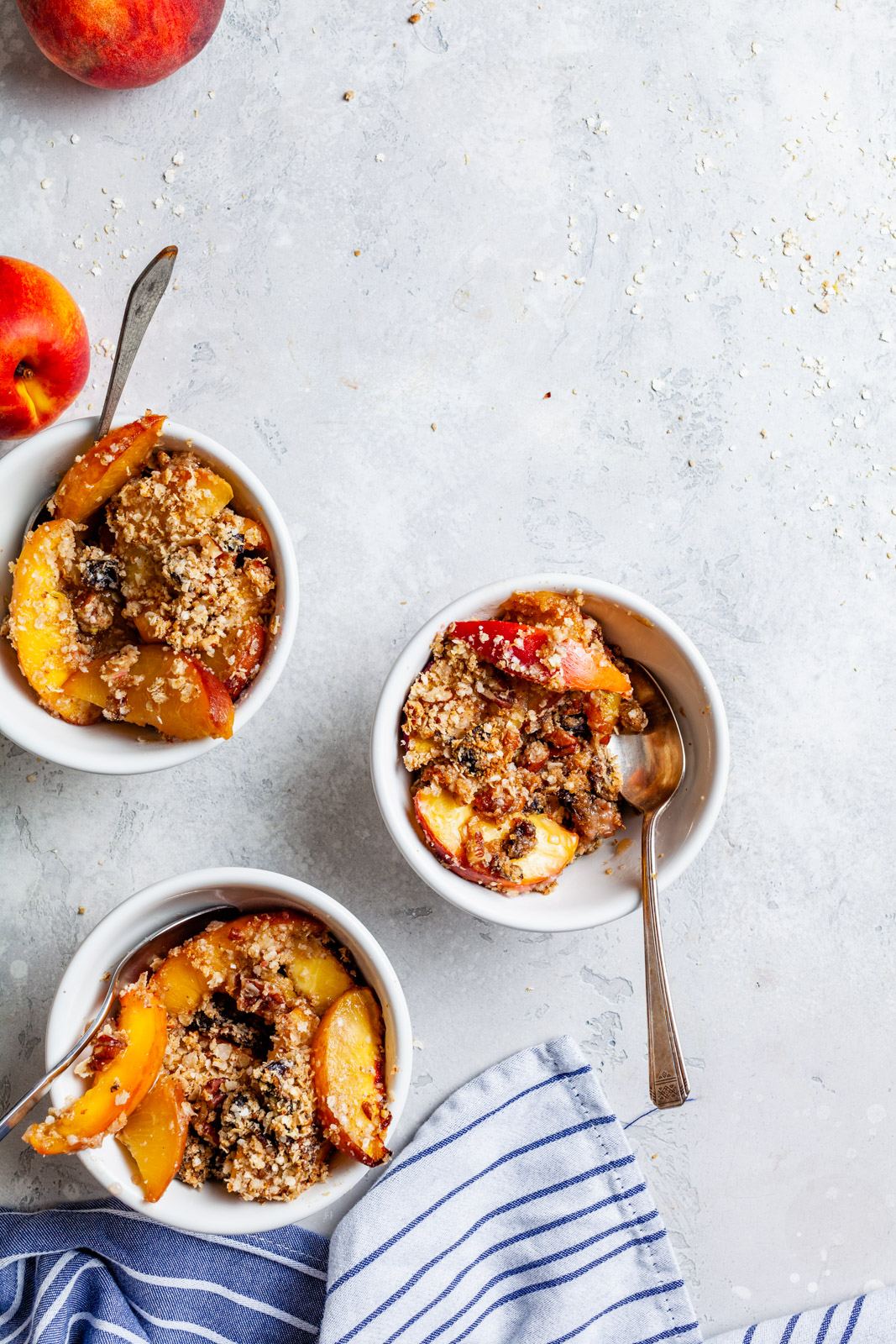 The fruit gets tossed with a bit of cornstarch or tapioca flour along with some freshly squeezed lemon juice and just a bit of maple syrup or honey, some vanilla and some warm spices. That’s all they need and then they are ready for the topping and to be baked off. Once golden and bubbly this crumble is ready to be served with a scoop of icecream or a dollop of yoghurt. Good enough for dessert and can easily pass for breakfast as it’s gluten free, vegan and refined sugar free. This is my kind of breakfast! I have partnered up with GoGo Quinoa to bring you this fabulous recipe, but all opinions are my own. Thank you for supporting Olive & Mango. 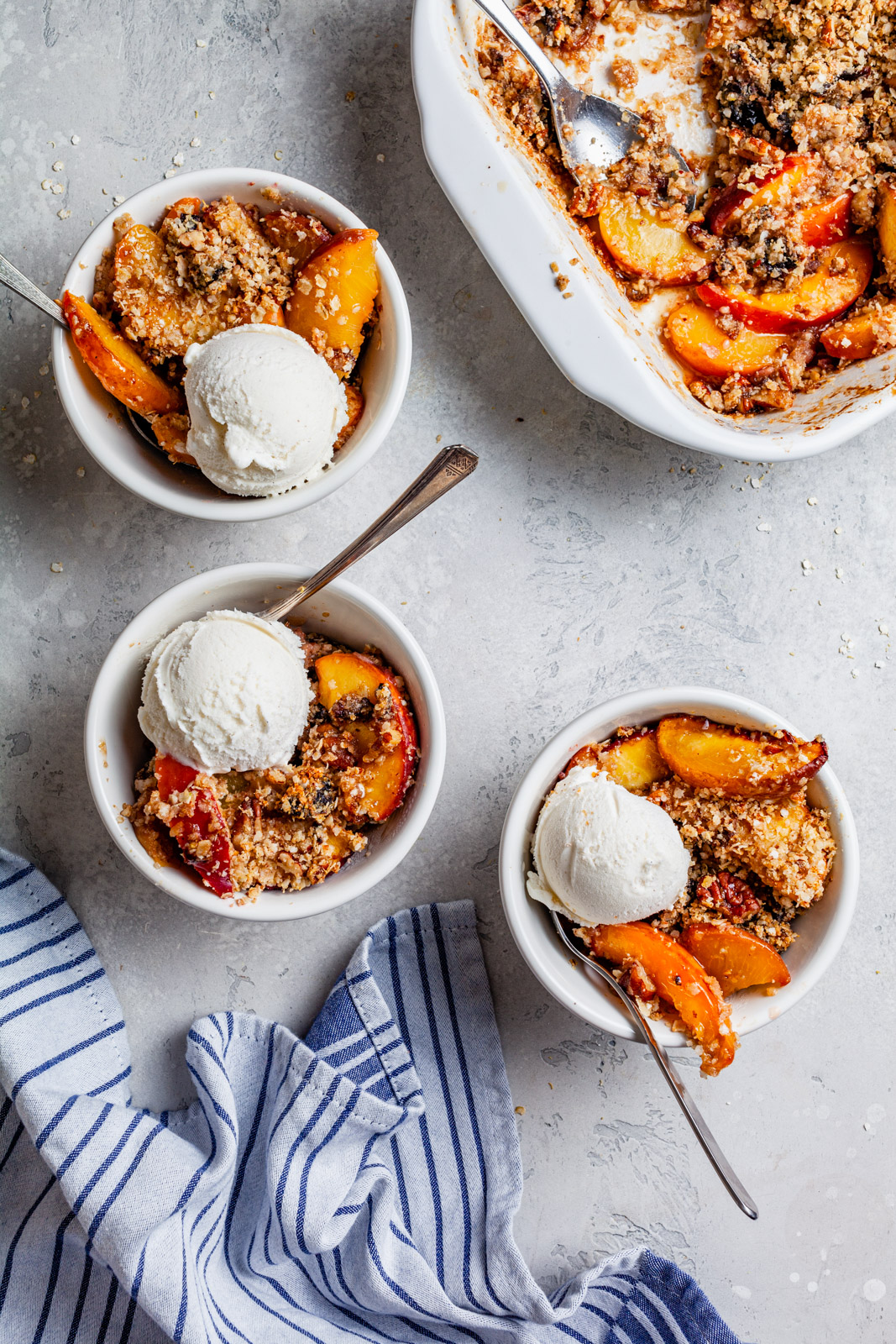 For the pecan crumble topping 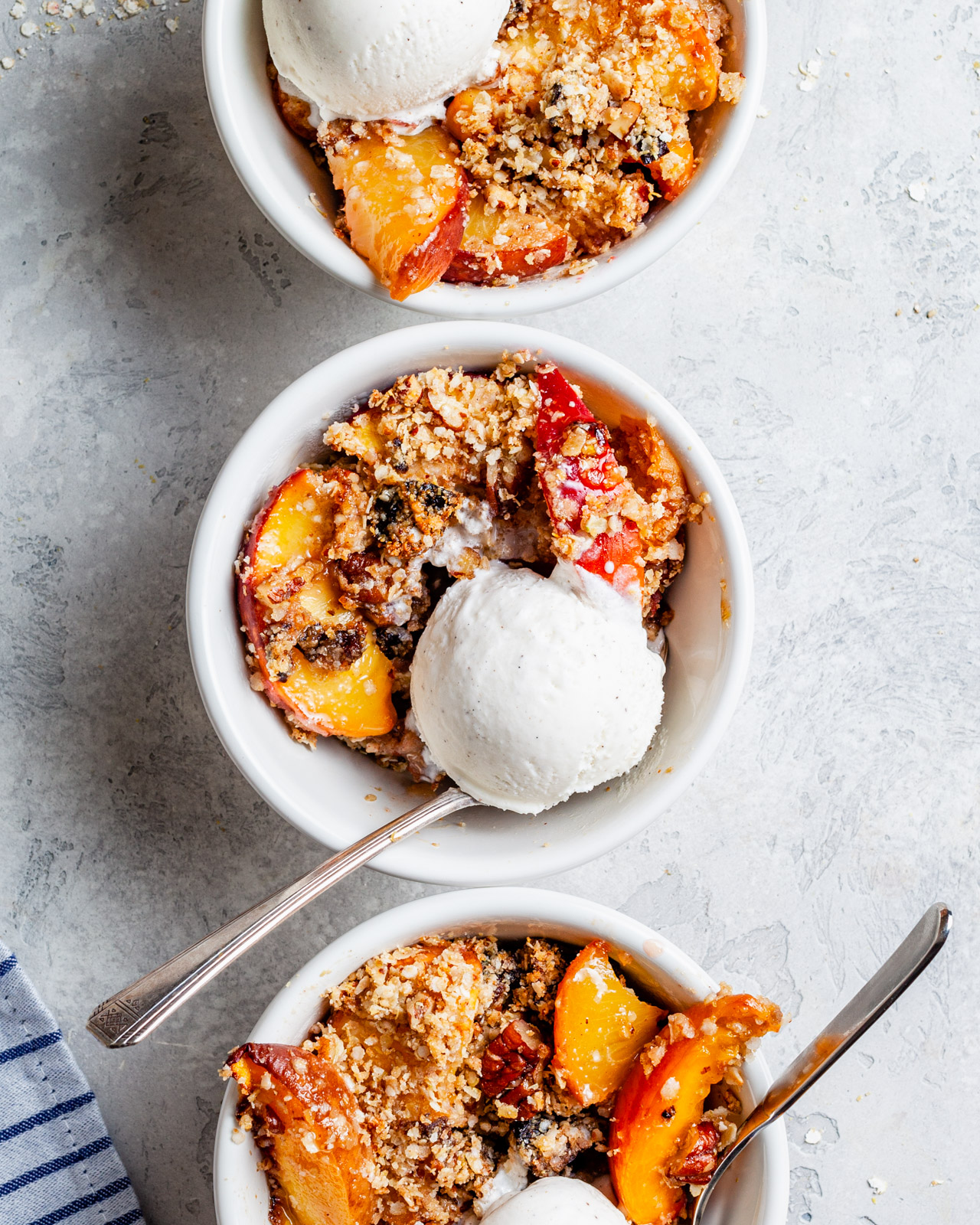